One name more than most has set Red Sox fans abuzz when speculating who their team might take with the No. 4 overall pick of the MLB Draft on Sunday: star Vanderbilt pitcher Jack Leiter.

The Commodores hurler mowed through the college baseball landscape this year, posting an 11-4 record with a 2.13 ERA, 179 strikeouts, and just 45 walks in 110 innings pitched.

To top things off, he showed off his electric stuff prominently during the College World Series, even notching a 15-strikeout performance against North Carolina State.

It’s no lock that Leiter, the best pitching prospect in the draft and son of former MLB star Al Leiter, will fall to No. 4 overall. What’s more, the Red Sox might also be considering a number of position players with the No. 4 pick, including Louisville catcher Henry Davis or high school shortstops Jordan Lawlar and Brady House

But MLB.com draft analyst Jonathan Mayo told WEEI’s Mut at Night Show Thursday that the Red Sox would be “ecstatic” if the hard-throwing righty slid to Boston’s pick.

“It’s one of those situations where they don’t know for sure. No one knows for sure what’s going to happen,” he said of how the draft will unfold. “They’re kind of in a good spot because they can react to whatever happens right above them. I think in a perfect world Leiter would get to them, and I don’t think he would get past them if he was there.”

Some scouts view Leiter as the best pitching prospect since Casey Mize, who now starts for the Detroit Tigers after the team selected him first overall selection in 2019. Like with Mize, Leiter’s explosive fastball and wicked breaking stuff utterly baffled college hitters.

When you’re that good, Mayo said, there are bound to be some “nitpicks” from evaluators trying to find out if he’s the real deal.

“One, he’s not the biggest guy in the world (6-foot-1, 205 pounds). And, two, he doesn’t have as much of a track record as a guy like Casey Mize, who did it for a few years in ACC play,” he explained. “Jack Leiter really had just the one college year because he barely pitched in 2020 because of no fault of his own.

“On the positive side, Mize’s overall package of stuff was a little bit better, but Leiter’s stuff is plenty good. This isn’t a guy who is throwing 90 miles-per-hour. Watching the College World Series, he was throwing 96 (mph) with a four-seamer up in the zone and he gets a lot of swings and misses on his fastball. People don’t see it. It moves. It’s got high spin. And he has a good breaking ball and a very good changeup. I would just say that Mize’s size and track record were just a little bit better, but there is not a whole lot separating the two.”

The upshot of taking a pitcher like Leiter is that he could be a top-of-the-rotation arm for years to come — perhaps even a future ace of the Red Sox staff.

That could take time for the Vanderbilt star, who doesn’t have a great deal of experience against top competition as yet. Mayo notes that Leiter hadn’t thrown more than 100 innings until this year.

For that reason, he said, “I could see a team taking him, whether it was the Red Sox or anybody else, and pumping the brakes just a little bit and giving him two years or a year and a half or whatever it is just so people have expectations.”

Mayo also notes Leiter had a higher walk rate than you’d like from such a dominant pitcher, suggesting he’ll need to improve his command against professional competition.

“But given the Red Sox are in a rare situation where they are picking that high but hope to be good again pretty quickly,” he said, “If you told me, say, a year from now they are competing and they want to bring Jack Leiter up to help out the bullpen down the stretch just to get his feet wet, like, say the Rays did with David Price, I could see that.” 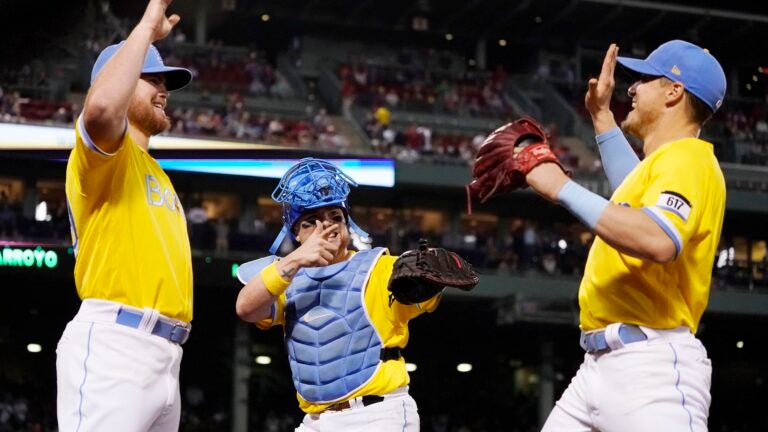