Holding the No. 4 pick in this year’s MLB Draft, the Red Sox are in a good spot to get a top-tier prospect.

One of those top prospects is Jack Leiter. The Vanderbilt pitcher is expected to be the first pitcher selected in Sunday’s draft, making it a strong possibility he gets picked before the Red Sox get on the clock.

However, Leiter could be making a play to fall enough in the draft to get selected by the Red Sox, according to draft expert and insider Eric Longenhagen and FanGraphs’ Kevin Goldstein.

“Both parties – being that the Leiter camp, his father (former MLB pitcher Al Leiter) is very involved as is his agent as is the Boston Red Sox are working their best to let’s just say steer Mr. Leiter to the fourth pick and have Boston take him,” Goldstein said on his podcast “Chin Music.”

“It’s probably some combination of a large (salary) number being thrown out, and it might be as aggressive as ‘Hey, don’t take me. I’m not going to sign with you.’ And they can say things and not be lying like ‘Jack doesn’t need the money right now.’ Obviously, his father is a former Major League pitcher. …With the whole COVID situation, Jack still has plenty of eligibility in college left. All of that kind of stuff. They can say all sorts of things. ‘Hey we’ve got all sorts of money. We don’t want to sign with your team. Jack wants to win a title at Vanderbilt.'”

While Leiter may want to go to Boston, both Longenhagen and Goldstein believe it’s unlikely Leiter and the Red Sox will be able to pull it off.

“It’s tough when you’re this good, kind of a prisoner of your own talent, to pull this off,” Goldstein said.

“You’ve got to remember the alternative for teams is if you do take Jack Leiter and he doesn’t sign in the allotted slot, then you get a comp pick next year,” Longenhagen added.

Longenhagen mentioned that the Rangers, who hold the No. 2 pick, feel better “than the general public” about draft and signing Leiter, according to his sources.

If the Red Sox aren’t able to pull off the play they seem to want, Goldstein believes their backup plan would be to draft Louisville catcher Henry Davis. The Red Sox recently held a private workout with Davis, who slashed .370/.482/.663 with 15 home runs and 48 RBIs in 50 games this past season.

In the scenario that both Leiter and Davis get picked in the top three, Goldstein believes it will get very interesting for the Red Sox.

“They could look to cut a deal to spread their bonus pool downward, with Harry Ford – an athletic high school catcher – being mentioned,” Goldstein said. 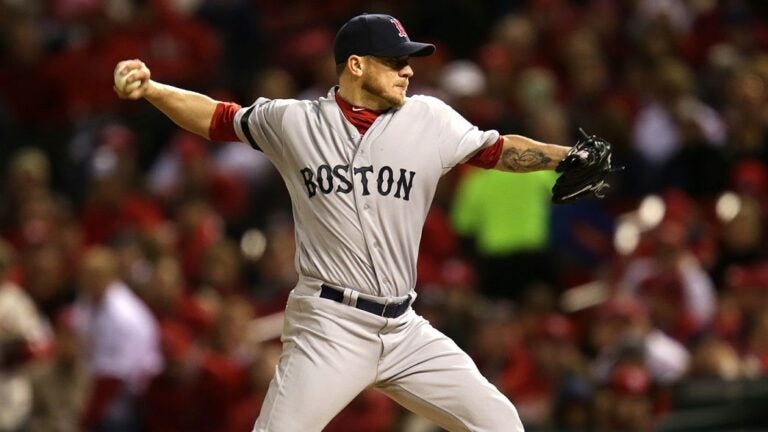 Remember when Jake Peavy bought a duck boat for the parade in 2013?