Day 2 of the 2021 MLB Draft began at 1 p.m. MLB.com is streaming all nine rounds. There will be one minute between picks today.

After selecting shortstop Marcelo Mayer in the first round Sunday, the Red Sox will have the fourth pick in each Monday’s nine rounds. Here’s where they’re picking:

An immensely gifted player with loud tools whose stock fell in 2021 based on his performance.

Fabian entered the year in the conversation as a potential candidate to land in the upper half of the first round. He has immense power, speed, and big league-caliber defense in center – a rare combination. In the pandemic-shortened 2020 season, he hit .294/.407/.603 with five homers in 17 games.

But he struggled in 2021, especially early. Fabian hit .249/.364/.560 with 20 homers and a lot of walks, but his 29 percent strikeout rate raised significant concerns about his future offensive profile. That said, he seemed to settle in as the season progressed, including a 23-game on-base streak from April to mid-May in which Fabian hit .304/.441/.759 while slashing his strikeout rate.

Fabian thus comes to the Sox as a college performer with upside but swing-and-miss issues that raise questions about his floor – not unlike 2016 fourth-rounder Bobby Dalbec.

McDonough played mostly center in college but was announced as a second baseman.

He showed an uptick in power this year though his strikeout rate elevated to 18 percent, up from 13 percent in his first two college seasons. Even so, the 5-foot-10 switch-hitter has been a solid performer and key contributor at a good college program, suggesting a strong likelihood of reaching the big leagues in at least some capacity.

The Red Sox turned back to Florida for this selection. The lefthanded hitter posted a .317/.435/.522 line with nine homers and more walks (42) than strikeouts (40) this season. He finished the year with a tremendous performance in the SEC Tournament, hitting .429 and slugging .643. In addition to catching, he also played first and third at Florida.

The Red Sox scouts who made dozens of hours-long drives to Chula Vista, Calif., to see first rounder Marcelo Mayer clearly made the most of their time. In the sixth round, the team selected another high school player from Chula Vista, Daniel McElveny from Bonita High School (down the road from where Mayer played for Eastlake High School). As a senior, McElveny hit .435/.580/.764 with five homers in 29 games. He has a commitment to play at San Diego State.

The Sox viewed him as a strong hitter with some power potential. He played both infield and outfield well enough in high school to suggest a range of positional possibilities moving forward.

Dobbins missed the 2021 season after suffering a torn ulnar collateral ligament and requiring Tommy John surgery in his spring buildup.

Dobbins threw well in the pandemic-shortened 2020 campaign, allowing three runs in 20 innings (1.35 ERA) while striking out 25 and walking five. According to this profile, the Indianapolis native was topping out at 98 mph this spring before suffering his season-ending injury.

The Red Sox added to their day-two haul of SEC position players. In 2021, Miller hit .313/.354/.601 with 16 homers, which led the team. His low walk rate suggests questions about his approach, but there’s real power in his lefthanded swing. He played and started 51 games as a junior, including 48 at first base for the Tigers this season. He was drafted by the Pirates in the 23rd round in 2018.

Litwicki has spent four years at Indiana, but has barely pitched in that time. He missed the 2018 season with Tommy John surgery, returned for 9 1/3 innings as a medical redshirt freshman in 2019, recorded 10 innings before the COVID-19 shutdown in 2020, and was on the mound for 12 innings in 2021. Yet those 10 innings were fascinating, as Litwicki showed career-best, high-90s velocity with 17 strikeouts and two walks.

61. Minnesota Twins: Steven Hajjar, LHP for Michigan who was the Massachusetts Gatorade Player of the Year in 2018 at Central Catholic in Lawrence. 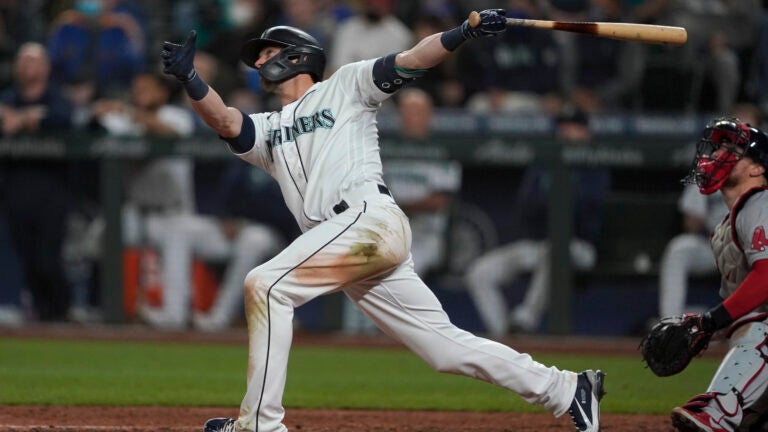