ST. PETERSBURG, Fla. (AP) — Wander Franco had two key run-scoring hits, the Tampa Bay bullpen worked out of a pair of bases-loaded jams, and the Rays moved into first place in the AL East with a 9-5 victory over the Boston Red Sox on Saturday night.

Franco’s RBI triple off Nathan Eovaldi (9-6) gave Tampa Bay a 6-5 lead in the sixth. He added a run-scoring single during a three-run eighth that made it 9-5. Francisco Mejía had a two-run single in the eighth.

Andrew Kittredge (7-1) fell behind Christian Vázquez 3-0 with the bases loaded and one out in the sixth, but rebounded to get the strikeout. He kept the game tied at 5 when he fanned Bobby Dalbec on three pitches.

Boston also failed to score after loading the bases in the seventh, an inning in which reliever Jeffrey Springs sprained his right knee going after a bunt single by Rafael Devers that hit the third-base bag. Matt Wisler ended the threat by striking out Hunter Renfroe.

Tampa Bay currently has 14 pitchers on the injured list.

The Rays got homers from Ji-Man Choi and Mejía. The Rays connected on three home runs in winning the series opener 7-3 on Friday night.

Xander Bogaerts and Dalbec homered for the Red Sox, who had at least a share of the divisional lead since June 28 but fell a half-game behind Tampa Bay.

Eovaldi gave up six runs and six hits over 5 1/3 innings. The right-hander allowed two homers after giving up just five over his previous 20 starts this season.

Mejía hit a two-run homer in the fourth that put the Rays up 5-3.

Dalbec tied it at 5-all on a fifth-inning, two-run drive.

J.D. Martinez had an RBI single and Bogaerts followed with a two-run shot off Ryan Yarbrough as Boston went up 3-0 in the first.

The Rays cut the deficit to 3-2 later in the first on Choi’s two-run homer.

Tampa Bay pulled even at 3-3 in the third when second baseman Jonathan Araúz misplayed two grounders. Nelson Cruz drove in a run when Araúz misplayed his grounder for his second error of the inning.

LHP Chris Sale (Tommy John surgery) allowed one run over five innings in his fourth rehab start with Triple-A Worcester. He last pitched in the majors on Aug. 13, 2019.

Slugger Kyle Schwarber, acquired from Washington on Thursday, expects to start a rehab assignment “pretty soon” for a hamstring injury.

Bogaerts played in his 1,000th game at shortstop, all with the Red Sox. He is the 70th player, and third with Boston (Everett Scott and Rick Burleson), to reach the total for a single franchise, according to the Elias Sports Bureau.

Rays: Ace Tyler Glasnow is expecting to get a recommendation from doctors next week to have Tommy John surgery. He has been in the IL since June 15. 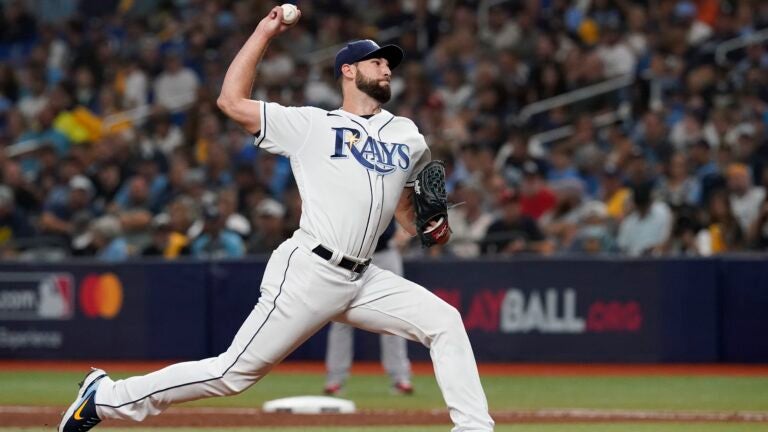