The Red Sox won their fourth game in five attempts on Sunday, clinching a sweep against the Orioles with a 6-2 victory.

The Orioles scored a run in the first inning, but the Red Sox weren’t far behind – – with two runners on in the bottom of the frame, J.D. Martinez drove a pitch off the National Car Rental sign in left field to give the Red Sox a 3-1 lead they would never relinquish.

The Red Sox’s offense, however, added some insurance in the sixth. Kiké Hernández’s infield single with the bases loaded plated one run, and Hunter Renfroe drew a walk to score another. Xander Bogaerts drove in a third with a fielder’s choice. The insurance runs made Jorge Mateo’s RBI single for the Orioles in the top of the seventh a footnote rather than a cause for concern.

Other players might have been more impactful (Eduardo Rodriguez threw six impressive innings, and Martinez delivered the haymaker in the first), but Schwarber’s performance was noteworthy since he notched his first two hits in a Red Sox uniform.

“The first day, talk about being nervous, jittery, everything like that,” Schwarber said. “… To get the first hit out of the way, the first two, I kind of get to relax now and it’s back to baseball. Very excited to be here, what an opportunity to have, and what a great group of guys to be around.”

The Rays lost to the Twins, so the Red Sox are back to three games behind in the AL East standings. The victory also kept the Yankees back 2.5 games after they beat the White Sox. The three-game series in New York — which begins Tuesday with a double-header at Yankee Stadium — looms large.

Schwarber was asked about being a part of the Red Sox-Yankees rivalry for the first time.

“Both teams going out there and grinding it out every single time, that’s something you look forward to as a ball player,” Schwarber said. “I’m excited to be on the Red Sox side of this and go out there and face that challenge.”

1. Eduardo Rodriguez wrapped up his afternoon after recording six strikeouts in six innings, during which he gave up one run despite walking three batters.

After he was pulled, Rodriguez could be seen arguing with Cora in the dugout.

“He wanted to go out there,” Cora said. “… I respect that he wants to be competing, but where we were bullpen-wise and knowing what’s coming, we needed some guys to go out there and touch the rubber.

“I appreciated he wants to keep competing, but at the end, we have to do what’s best for the team. He’ll get the ball again on Saturday and the way he’s throwing the ball, he’ll be okay.”

Rodriguez confirmed that he wanted to keep pitching.

“I like to be competitive all the time,” he said. “No matter how many pitches I have, I want to go out there.”

2. Adam Ottavino took a line drive off the shoulder in the top of the seventh inning and was forced to leave the game, replaced by Garrett Whitlock. Cora said Ottavino was “a little sore, nothing structural.”

Josh Taylor, meanwhile, was put on the COVID-19 IL before the game. Cora said Taylor was tested Sunday and expressed confidence the reliever will join the team in New York.

“We’re pretty sure the way he feels and where we’re at with the testing and all that, he’ll be with us on Tuesday,” Cora said.

3. After replacing Ottavino, Whitlock was brilliant — he shut down the first two batters he faced in the seventh, then struck out the side in the eighth.

“I think if we start using him in certain situations more frequently, he might give us one big inning in four games a week,” Cora said. “It’s that balance. We have to be smart about it, but at the same time, we know where we are at, and the value of getting 27 [outs] is getting bigger and bigger, and he’s a big part of it.”

5. The Red Sox picked Travis Shaw up off waivers from the Brewers on Sunday, adding a slugger who has struggled at the plate over the last year.

For Cora, the acquisition was a moment he hoped he would never face as a manager.

“Finally I feel old,” Cora said with a smile. “I played with his dad [All-Star closer Jeff Shaw] — Travis running around in the clubhouse in LA. So I was actually at one point, I was like, ‘Hopefully, it doesn’t happen, that I have to manage a teammate’s kid.’

Still, Cora likes Shaw as a person and a player.

“He’s a good kid, a good guy,” Cora said. “We’re going to use him the right way. I think it gives us more weapons to maneuver for 9 innings. We can pinch hit, we can platoon, we can do a lot of things with him.” 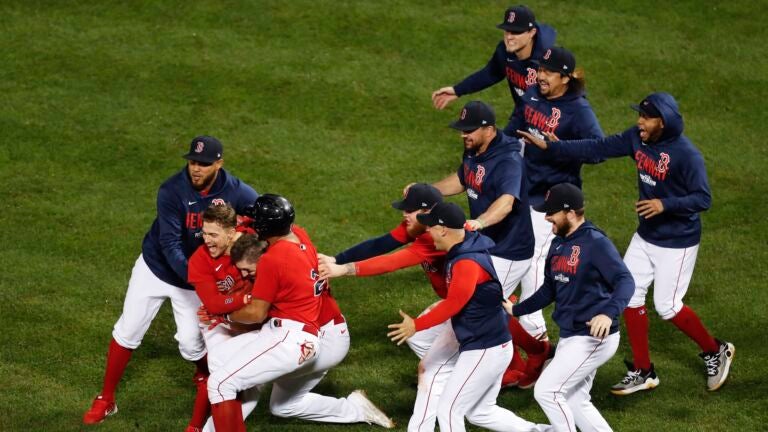 Here’s the Red Sox roster for the ALCS vs. the Astros