Dalbec drove in seven runs and Rafael Devers hit his 30th homer, a two-run shot during a five-run sixth that helped the Red Sox put away the Twins and seal Sale’s third victory in as many starts since his return from Tommy John surgery.

Sale (3-0) pitched 5 1-3 innings, striking out eight and allowing two runs on two hits. Willians Astudillo’s two-run homer in the fifth accounted for the only runs the Twins managed off Sale.

Astudillo ended up pitching, too, moving over from third base to start the bottom of the eighth and giving the Twins’ actual relievers a breather on a hot night with a flight home still to go.

Dalbec’s three-run homer in the second off of John Grant (4-8) gave Sale some early cushion and started an offensive outburst for the struggling Red Sox.

The Red Sox hit multiple homers for the fourth straight game, but the highlight of the night was Sale’s nine-pitch third inning. Sale, whose first immaculate inning came against Baltimore on May 8, 2019. He did it again the following month against Kansas City, then joined Koufax in the third inning Thursday when he struck out Nick Gordon, Andrelton Simmons and Rob Refsnyder on three pitches each. Refsnyder was fooled badly by a slider in the dirt on the final pitch of the inning.

Koufax completed his immaculate innings for the Los Angeles Dodgers between 1962-64.

Dalbec’s first homer reached the second row of seats atop the Green Monster in left field and put Boston up 3-0. His second came on a line drive in the seventh that just cleared the yellow line on top of the 37-foot wall and pushed the lead to 12-2.

Fans chanted “Bobby!” after he rounded the bases and continued the chant until Dalbec climbed back out of the dugout to answer the curtain call.

Sale didn’t allow a hit until Ryan Jeffers’ one-out single in the fifth, which Astudillo followed quickly with his seventh homer of the season. Astudillo belted an 0-1 slider with a drive that bounced off the very top of a billboard standing above the Green Monster.

Astudillo wasn’t done for the night, although that was his only hit. Down 12-2 midway through the eighth and with nothing to gain, manager Rocco Baldelli called upon his third baseman to take over on the mound. It took him 20 pitches, most of which floated in around half the speed Sale and Grant were throwing a few hours earlier, but Astudillo finished without allowing a hit or run.

Twins: IF Jorge Polanco was out of the lineup with soreness in his back. Manager Rocco Baldelli said the Twins planned to give Polanco, who homered for the second straight game Wednesday, a day off this week and Thursday seemed best. “He probably wants to be in the lineup, too, but we were going to pick a day and today’s the day,” Baldelli said. … RHP Kenta Maeda (right forearm tightness) was examined for a second opinion by a doctor in Dallas. The Twins planned to meet with him Friday to discuss treatment options, which Baldelli said may or may not include surgery.

Red Sox: Placed OF Hunter Renfroe on the bereavement/family medical emergency list Thursday, causing a shuffle in the lineup. Boston recalled Jarren Duran from Triple-A Worcester and started him in center field. Kyle Schwarber, who was supposed to make his first start playing first base since joining the Red Sox last month in a trade with Washington, stayed at DH and J.D. Martinez played left field. Xander Bogaerts, who snapped an 0-for-13 slump with a ninth-inning single Wednesday night, was out of the lineup and replaced by Kiké Hernández. Christian Arroyo replaced Hernández at second base.

Twins: LHP Andrew Albers (0-0, 2.25 ERA) makes his first start and just second appearance of the season in the opener of a three-game homestand against the Milwaukee Brewers.

Red Sox: LHP Eduardo Rodríguez (9-7, 5.19) starts for Boston as it opens seven games in seven days on the road, starting with a three-game series at Cleveland. 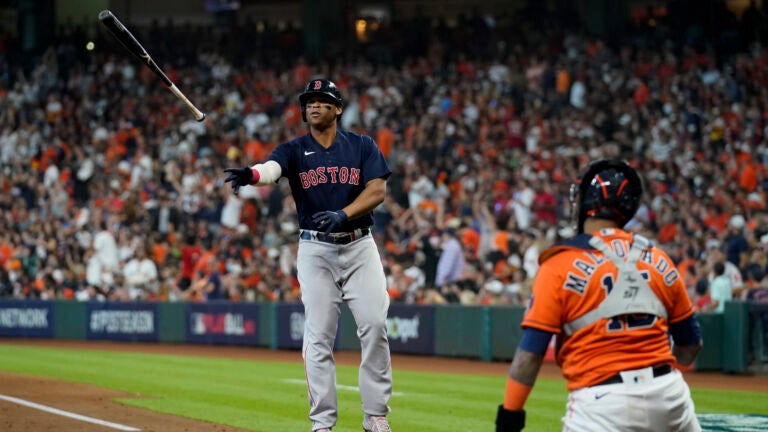