When Hunter Renfroe checked his phone following the Red Sox’ 2-1 victory over his former team on Wednesday, he found several texts from his ex-Rays teammates.

“Nothing too bad or anything, just kind of jokingly,” Renfroe said, smiling. “A GIF waving a white flag and stuff like that.”

While the Rays took the series and an increasingly commanding stranglehold over the AL East, they have reason to respect their former slugger. Renfroe was the entirety of the Red Sox’ offense — his two-run homer in the eighth inning accounted for both runs.

But Renfroe also had a pair of assists from the outfield that gave him a place in Red Sox history.

The first came in the fourth inning, as Manuel Margot tried to stretch a two-out single into a double. Renfroe mowed him down with a perfect throw, later clocked by the NESN broadcast at 90.1 mph.

The second ended the game. With two outs in the top of the ninth, Joey Wendle hit a line drive to center, and Danny Santana missed the catch. Renfroe chased the ball down near the warning track and fired a comet to third, where Bobby Dalbec applied an impressive tag to win the game.

“Where [Wendle] was, I knew I had a chance to possibly get him,” Renfroe said. “I just knew I had to make a good strong throw and throw it on the money, and it was luckily enough on the money.”

Renfroe said he harbors no ill-will toward the Rays, but he is glad to be an everyday player after platooning in Tampa Bay.

“That’s just kind of how they play ball, they’ve always been that,” Renfroe said. “But I knew myself as an everyday player, and I wanted to prove myself as an everyday player. Coming in, Chaim [Bloom] and [Alex Cora] always said, ‘Your job is going to be in right field. I want to throw you out there and keep you out there, you’re going to be our guy.'”

Their trust paid off. After a slow start, Renfroe has been — as Cora put it — “one of our best hitters the last few weeks.”

“He’s been so consistent,” Cora said. “… If you look up now, the OPS, the homers, the RBIs, obviously what he’s doing defensively we always take it, but offensively he’s a force.”

Meanwhile, Renfroe’s pair of outfield assists gave him 16 for the season — the most, per the team, of any Red Sox right fielder in the Expansion Era. 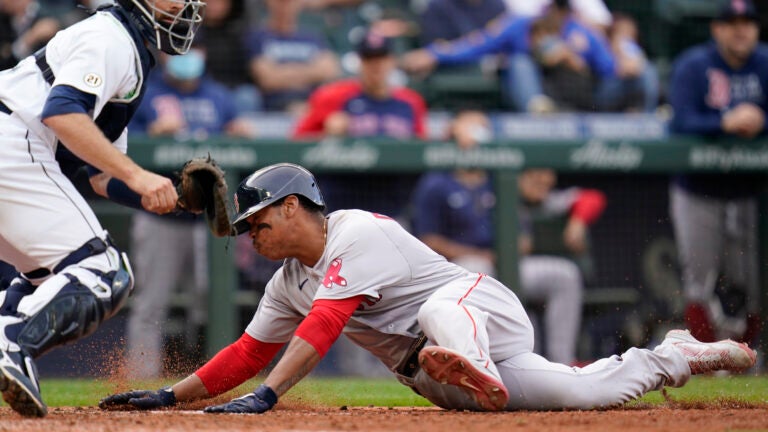