So it turns out that some of my preseason predictions about the Red Sox were about as accurate as, oh, a bone-chip-shifting Butch Hobson throw in August 1978.

Much to my surprise, Garrett Richards is not the second coming of 1995 Eric Hanson, a 17-game winner in his one season with the Sox. Turns out Richards would have been no better than the third starter in a pitching rotation otherwise made up of members from the band Hanson. He’s been aces in relief, though.

Even the ones that have been right on come with a yeah-but caveat. I thought the Red Sox would win somewhere around 83 or 84 games, play meaningful baseball deep into September, and maybe sneak into a wild-card slot. That was an optimistic prediction at the time; none of the six Globe writers in the baseball preview section picked them to make the playoffs.

That’s almost exactly how it’s playing out. Barring a 2011-style, tongue-swallowing choke job over their final 16 games, the 81-65 Red Sox will exceed the low 80s in wins. But it’s September, they’re playing those meaningful games, and the race for the two wild-card spots could go down to the final weekend.

It’s supposed to be fun. Maybe it will be. But even the few among us who expected them to be in this position are feeling some annoyance at the route they’ve taken there. I thought the Sox would struggle early in the season as the roster meshed and Chaim Bloom made whatever repairs were necessary along the way.

Instead, they played outstanding baseball for 3½ months, exceeding all expectations right up until we became convinced that they were an outstanding team. Then, because of regression, injury, some players’ ignorant irresponsibility regarding COVID-19 vaccination, and exposed flaws in the pitching staff in particular, they turned into a mediocrity.

For much of the season, they seemed pretty close to a playoff certainty. Right now — and call this another prediction doomed to go wrong if you want, but it’s true — it doesn’t feel like they’re going to make it at all.

The Red Sox lost to the Mariners in Seattle Monday night, 5-4, with an error by novice first baseman Kyle Schwarber in the seventh inning proving the latest terrible defensive mistake. The loss dropped the Red Sox to a game back of the scorching Blue Jays (81-63) and into a virtual tie with the Yankees (80-64) in the AL wild-card standings.

They’re not alone, either. The Mariners are just two games back, and the A’s are 2½ games out.

Trends are not in the Red Sox’ favor. On July 5, the Red Sox led the division by 4½ games. They now trail the running-away-and-hiding Rays by nine, losing 13½ games in the standings in little over two months. They’ve gone 31-34 since July 1, 26-29 in the second half. They’re not charging toward October. At best, they’re rolling there in neutral, fortunate that the Yankees can’t find the gear they want either.

The Yankees caught fire in August, winning 13 in a row on the way to a 21-8 month. In September, they’ve already equaled that loss total, with just four wins. They’re 4-12 since the win streak ended.

The Blue Jays, meanwhile, have roared to catch up with and surpass both the Sox and Yankees, winning 12 of their last 13 with a lineup that simply cannot be pitched to right now.

Vladimir Guerrero Jr.’s exploits, including an MLB-leading 45 home runs, have him within striking distance of the Triple Crown, but this is not a one-man show. Marcus Semien, perhaps baseball’s most underrated player, has 39 homers. Teoscar Hernandez has driven in 102 runs. Six players have at least 80 RBIs. The Jays have scored 111 runs in their last 12 wins, an average of 9.25 per game. They’ve won 28 games this season by five or more runs.

The Jays remind me of the 2003-04 Red Sox, with mashers up and down the lineup and a strong front of the rotation. They’ve gone 36-21 since the All-Star break with a plus-102 run differential. It would not surprise me at all if they win the World Series, which would be quite a final scene for their vagabond tale of a season. Would they have victory parades in Dunedin, Fla., Buffalo, and Toronto? Would we have to refer to them as North America’s Team?

This much is certain: The Red Sox have to get it together immediately, starting by winning the last two games of this series with the Mariners. They have a weird schedule remaining, including a fortunate six games with the Orioles, three with the Yankees, two with the Mets, and a season-ending three-game set with … the Nationals.

The Yankees have nine games remaining with sub-.500 teams Baltimore, Texas, and Cleveland, but also three with the Jays (there will be many homers in that series) and those aforementioned three with the Sox. They close with the Rays, who are so far ahead in the division that they’ll probably give at-bats to Jorge Cantu and Brent Abernathy in that final series. Who knows what to expect there?

Since we started by revisiting some predictions, we might as well wrap it up with a couple, so here you go.

The Jays, who have seven left with the so-so Twins and end the season playing an Orioles team that should be relegated to whatever Rob Manfred is calling the International League these days, will coast to the first wild card, and their postseason stay won’t be short.

The second prediction: The Red Sox and Yankees will play in a one-game playoff for the right to get smoked by the Jays in the one-game wild-card playoff. I think that’s the best-case scenario Red Sox fans can hope for right now — a chance to make the Yankees’ season end in disappointment a few days sooner than yours does. 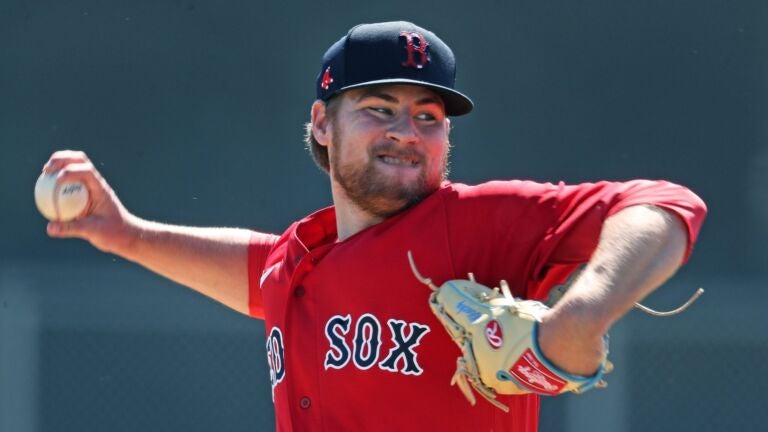