BOSTON (AP) — Put the popcorn away for the winter at Tropicana Field.

The AL East champion Tampa Bay Rays saw their record-setting season come to a sudden end Monday night when they lost to the Boston Red Sox 6-5 in Game 4 of their Division Series and were eliminated from the best-of-five playoff.

The Rays set a franchise best with 100 wins this season and shut out wild-card Boston at home in their postseason opener. Players sat comfortably in the dugout during the game, several of them munching on popcorn.

After a blowout loss in Game 2, they came to Fenway Park. And two days in Boston became their own personal horror movie, spoiling their bid to reach a second straight World Series.

Boston clinched the ALDS with consecutive walk-off wins, and Red Sox players threw gum in the air when they celebrated near the mound after Kiké Hernández’s sacrifice fly scored pinch-runner Danny Santana from third base with the decisive run in the bottom of the ninth.

“There’s no doubt there’s disappointment,” Tampa Bay manager Kevin Cash said. “Very proud of what was accomplished in the regular season, but we had high aspirations to get deep in this thing. We ran into a Red Sox team that they just beat us, no other way around it. They got the big hits.”

“The popcorn, I saw them the next day,” shortstop Xander Bogaerts said. “I said: ‘Damn, they were really doing that.’ They felt comfortable.”

Tampa Bay finished eight games ahead of Boston during the regular season and took 11 of the final 15 meetings to win the season series 11-8. But in their first playoff matchup since Chaim Bloom left the Rays’ thrifty front office to join the Red Sox after the 2019 season as their chief baseball officer, it was big-budget Boston that came out on top.

Christian Vázquez opened the ninth with a single off J.P. Feyereisen and advanced on a sacrifice. Pinch-hitter Travis Shaw then hit a slow grounder to third and reached on an infield single when Yandy Diaz’s off-balance throw bounced and first baseman Ji-Man Choi couldn’t corral it cleanly into his chest.

Hernández followed with his game-winning fly to left field.

“I’m not disappointed at all,” Rays center fielder Kevin Kiermaier said. “I would have loved to have won that game and have had another opportunity. Everyone’s in the clubhouse now, shaking hands and hugging each other. It just reminds us of how special of a year it was for us.”

Two bad bounces for the Rays and their season was over.

Eight batters later, the Rays found themselves down 5-0 and McClanahan was pulled.

The lefty allowed all five runs with two outs, giving up Rafael Devers’ three-run homer to straightaway center field on a first-pitch fastball.

Bogaerts followed with a single before scoring on Alex Verdugo’s double high off the Green Monster. J.D. Martinez then hit an RBI single high off the Monster and Cash yanked his highly touted prospect.

“Mac has been such a horse for us all year long,” Cash said. “He’s a day short of regular rest and just felt like given that stretch of the lineup, I wanted to see him try to get through the top of the lineup twice. Obviously, it kind of went sideways pretty quick,”

The Rays rallied, cutting it to 5-3 in the sixth on prized rookie Wander Franco’s two-run homer. They scored two more in the eighth, tying it in on Randy Arozarena’s RBI single.

But on this night, Tampa Bay’s versatile bullpen faltered.

A night earlier, the Rays lost 6-4 on Vázquez’s two-run homer over the Green Monster in the 13th inning after an obscure rule and an untimely bounce took away a likely go-ahead run in the top of the inning.

Kiermaier’s deep drive sailed over right fielder Hunter Renfroe’s head, bounced off the short wall in front of the Boston bullpen and back onto the warning track.

It ricocheted off Renfroe and into the bullpen for a ground-rule double. That sent Diaz, who almost certainly would have scored easily from first base, back to third.

Before the game, Cash said McClanahan and 22-year-old Shane Baz would be in the bullpen.

Cash also said he’d have to be careful using them.

“If we see a need arise, we’ll use them,” he said. “We’re going to be very mindful. We’re talking about players that are so important to us now and moving forward.” 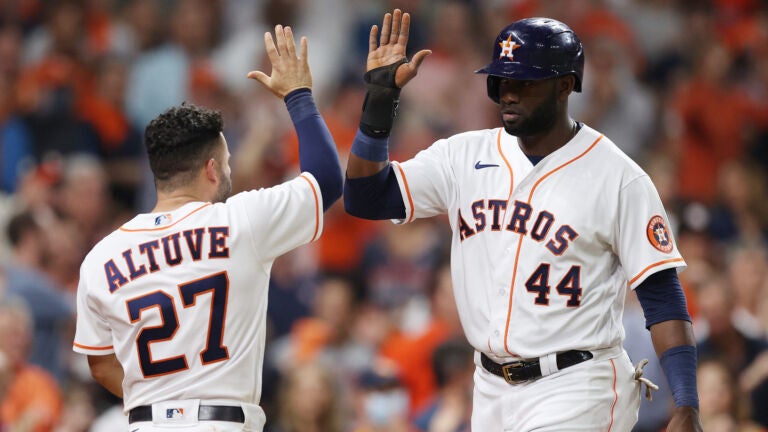