Entering the bottom of the ninth of Game 4, the Red Sox found themselves in a similar spot to Game 3.

The team’s bats had gone cold after scoring in the early innings, as all five of their runs up to that point were scored in the third. And just like in Game 3, the Red Sox bullpen blew the lead, allowing the Rays to tie it up in the eighth on back-to-back nights.

While it took a home run to score the winning run in Game 3, the Red Sox knew they didn’t need to take that approach to win Game 4.

Christian Vazquez began the inning with a single off J.P. Feyereisen. The single left manager Alex Cora with a difficult decision to make, as the catcher isn’t the fastest runner but they might have needed him if the game moved into extras.

So, with Christian Arroyo up, they decided to bunt.

“We were battling at the end to make decisions,” Cora said. “Adam [Ottavino] was going to be coming in, so we weren’t sure to run for Christian because of the running game and all that stuff. That’s why we bunted, and we kept Christian out there.”

The bunt worked to perfection. Vazquez moved to second while Arroyo was out at first.

With a righty on the mound, Cora made another decision. He swapped Bobby Dalbec for Travis Shaw, who had yet to play in the ALDS up to that point.

Shaw battled in a six-pitch at-bat before hitting a soft grounder to third baseman Yandy Diaz. The throw from Diaz to first baseman Ji-Man Choi was short, and Choi couldn’t cleanly field the ball. Shaw was safe at first and Vazquez moved over to third.

Kiké Hernández had a chance to knock in the game-winning runner in scoring position, just like he did in Game 3.

“So, I had the chance to win the game last night and I didn’t do it,” Hernández said. “I was thinking, walking to the plate (last night), with the way things were going, ‘I’m about to make this place my place.’ But that’s me talking to myself to pump me up, to get my confidence up. To get me under control.”

While working on his confidence, Hernández realized the situation didn’t require him to knock the ball out of the park – especially now with Danny Santana running for Vazquez.

“Don’t try to do too much. Just bring in that run from third,” Hernández said of his approach. “You know, having Danny (Santana) at third instead of Vazqy (Christian Vazquez) eased my mind a little bit. But, thank you fans for yelling my name that made my confidence go up a few levels so thank you for that!”

The Fenway Faithful’s chants and Hernández’s mindset worked. On the second pitch, Hernández hit a flyball to left fielder Austin Meadows, who cleanly caught the ball and whipped it home.

But Meadows’s throw was off-line, and Santana was able to score standing up.

Game over. Series over. Red Sox win 6-5 and move on to the ALCS.

Reflecting on how the inning went, Cora took a victory lap for the team’s approach. 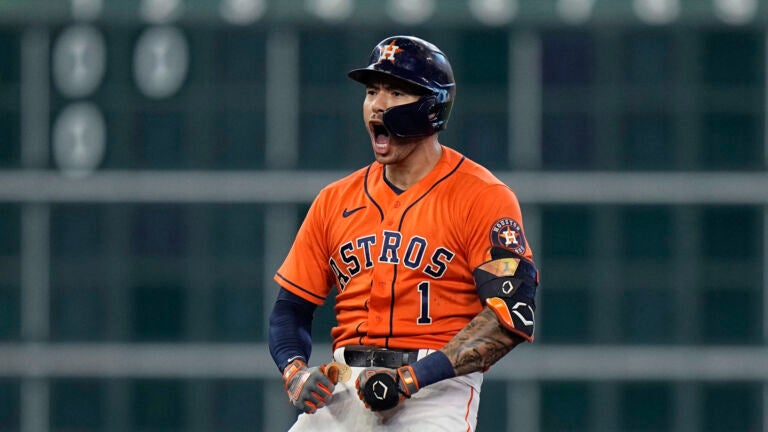