Here are the takeaways as the Red Sox rolled 9-5 over the Astros to claim Game 2 of the ALCS on Saturday.

“That situation, the pressure is on him, it’s not on me to come through there,” J.D. Martinez said. “It’s the first inning. He has bases loaded. I’m trying to tell myself that, trying to stay relaxed and just looking for a pitch so I can just put a barrel on it.”

The rest of the game was largely procedural. The Astros posted three runs against Eovaldi in the fourth. Kyle Tucker drove in one with an RBI double, and Yuli Gurriel sent in two more with a single. Eovaldi pitched out of the inning, but he was pulled in the sixth. Adam Ottavino let runners gets to second and third, but he shut down the threat.

The Red Sox threatened to add another insurance run in the top of the ninth, but came up empty. Solo homers by Gurriel and Jason Castro in the bottom of the ninth trimmed the deficit, but José Altuve flew out to end the game.

Stars of the Game

The Red Sox are in a good position headed back to Fenway after splitting a pair in Houston, especially given the issues the Astros might face with their starters.

Imagine how much better shape they’d be in if they could have squeaked out Friday’s game.

1. Hernández was 2-for-4 with two runs, an RBI, and a homer. He also reached base in the eighth when a pitch grazed his left arm.

Does 2-for-4 with a homer count as a slump for Hernández these days?

“I guess I’m feeling good and the importance of the game is allowing me to stay focused and stay locked in,” Hernández told the FOX broadcast after the game. “Not thinking too much about it, I’m just glad I’m able to put up good at-bats and get on base or drive myself in to help us win and help us get to this position.”

2. Red Sox jumped on top immediately thanks to Martinez and Devers. Once again, Devers never looked comfortable at the plate, wincing and flexing his right arm after every swing. Devers told reporters before the game he was feeling better.

“Obviously, with the training staff, with everything that they were able to do to help me feel better out on the field, it feels a lot better than it did in the last round, so I’m fortunate enough to be able to feel better than I did last time,” Devers said.

It’s a little hard to believe him given the available evidence. In the eighth, Devers once again dropped his bat following an enormous swing. Alex Cora and a Red Sox trainer paused the game to check on the star third baseman, but Devers waved them back to the dugout after a few minutes.

“It doesn’t really limit me as much because I’m able to play every single day,” Devers said after the game. “But, obviously, it’s a part of it right now. We have a couple more weeks to play and just trying to grind it out and be there for my teammates right now, so I can still play.”

Any number of things could be affecting Devers, but whatever the issue is, he seems to be able to battle through at crucial moments.

3. The Astros’ pitching rotation might be in some trouble after Luis Garcia went out with an undisclosed knee injury. That forced Dusty Baker to go to Jake Odorizzi, who many predicted would start Game 4. If Garcia misses any real time in the ALCS, the Astros will be down two of their pitchers — Garcia and Lance McCullers Jr. Odorizzi, meanwhile, threw 80 pitches in a game that the Red Sox were over 80 percent likely to win following Martinez’s grand slam and over 97 percent likely to win after Devers’ (per Statcast).

The Astros’ offense will always keep them in games, but the degree of difficulty keeps rising with every starter who goes down.

4. Eovaldi wasn’t perfect, but he gave the Red Sox everything they needed. He looked a little unfocused in the fourth but righted the ship quickly in the fifth. Thanks to his performance — as well as a pair of scoreless innings from Garrett Whitlock — the Red Sox needed fewer pitchers out of their bullpen, which was important after Friday’s marathon.

“There’s a reason we map things the way we do,” Cora said. “Some people don’t agree with us, but I think we have a pretty good pulse of what we do in our program. Yesterday we almost pulled that off.

“… Having Nate in Game 2 understanding and knowing that there’s a good chance he is going to go deep in the game with the off day tomorrow, we felt comfortable with the way we did things. He’s has been a horse for us, he’s been amazing, and he went out there and did an amazing job.

Maybe most impressive: Eovaldi shook off a lengthy in-between innings 1 and 2. Luis Garcia was pulled after the first batter, and Jake Odorizzi needed an extended period to warm up. When he was finally ready, he allowed the Red Sox to load the bases and gave up Devers’ grand slam.

By the time the dust settled, Eovaldi sat cooling in the dugout for 40 minutes. No matter: He needed just six minutes to dispatch the Astros.

“The timing was nice since it was the very beginning of the game,” Eovaldi said. “I wasn’t too deep into my pitch count or anything like that.”

5. Darwinzon Hernandez gave up the two solo homers in the bottom of the ninth before Ryan Brasier came in and gave up a fly out to the warning track to end the game.

The Red Sox were never in any real danger of losing after Devers’ grand slam, but the Astros provided reminders even in a loss that their offense is plenty potent. 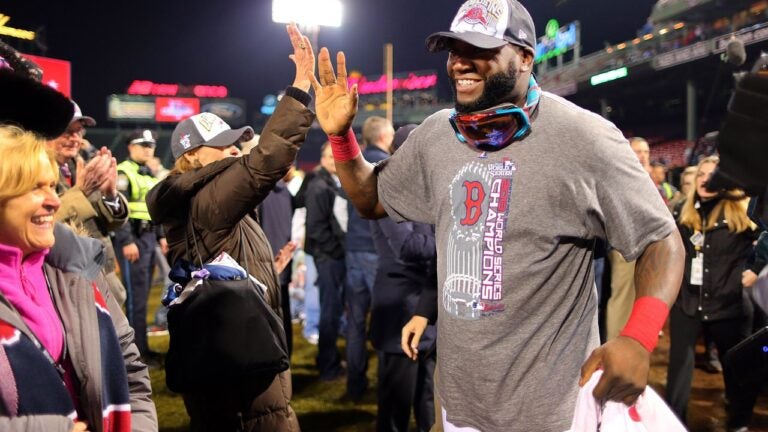