Here are the takeaways as the Red Sox combusted in the ninth inning of Game 4, falling 9-2 to the Astros.

In the first two frames, Tuesday’s game looked like it might be a slugfest. Astros third baseman Alex Bregman got the scoring started with a solo homer, but Xander Bogaerts answered with a two-run shot in the bottom of the inning.

Then, for seven innings, the scoring came to a screeching halt. Cristian Javier locked up the Red Sox offense for three innings, and the bullpen continued to apply the clamps the rest of the way.

The Red Sox nearly got away with it anyway, but Garrett Whitlock made a mistake to José Altuve leading off the eighth inning — a sinker that caught a lot of the plate, which Altuve hammered over the Monster to tie the game.

Red Sox manager Alex Cora brought in ace Nathan Eovaldi in the top of the ninth, hoping to give the Red Sox a chance to grab a 3-1 series lead.

It didn’t work. Eovaldi gave up a lead-off double to Carlos Correa, and with two out, Jason Castro plated him with a single to give the Astros a 3-2 lead. With the bases loaded, Cora took out Eovaldi, and the Astros jumped all over Martín Perez — scoring six more runs before the Red Sox finally ended the threat. The Red Sox were scoreless in the ninth despite a pair of singles, and the Astros evened the series at 2-2.

Castro’s hit was crucial, but the Red Sox might have rallied if it weren’t for Brantley’s ensuing double with the bases loaded — a sledgehammer to any hopes of a rally in the bottom of the ninth.

The Astros will have a chance to play in front of their home crowd again. After consecutive blowouts, the Red Sox appeared to be on the verge of blowing the series open after the first two innings. But Javier’s pitching in relief bought the Astros some time, and the collapse gave their bats a chance to wake up and stretch.

It remains to be seen how costly that ninth inning might be over the next 2-3 games.

1. Red Sox fans will want to take a deep, calming breath before viewing this graphic from ESPN’s Jeff Passan.

Eovaldi thought he caught the corner of the strike zone against Castro on a 3-2 count with two out that would have prevented all seven of the Astros’ ninth-inning runs from scoring. Diaz disagreed, but Statcast disagreed with Diaz.

The decision to have Eovaldi throw won’t be too costly to Cora’s rotation — Eovaldi isn’t slated to pitch until Game 6 with Chris Sale on the docket for Wednesday. The decision to let Pérez handle the bases-loaded situation, however, might have been less advisable, especially given that a dispirited top of the Red Sox order still threatened to score in the ninth. If the Red Sox could have limited the damage, they might have had a shot.

2. The big difference for the Astros’ pitching staff: Dusty Baker pulled starter Zack Greinke before the Red Sox could do any significant damage. Greinke, who threw limited pitches over the last month after dealing with a neck injury and a positive COVID test, was fooling nobody.

But Baker brought in Cristian Javier, who shut the Red Sox down for three full innings. Javier’s outing seemed to cool the Red Sox’s bats down significantly.

3. The Red Sox’s offense was catatonic for most of the game — a complete reversal from the last two games. The top of the lineup — Kyle Schwarber, Kiké Hernandez, and Rafael Devers — were hitless until the final frame (Hernandez and Devers singled in the ninth).

Meanwhile, Xander Bogaerts — who struggled in the first three games — was 2-for-5 with his two-run homer as well as a double. The Red Sox’s offense inverted at the wrong time.

4. Per the FOX broadcast, the Astros became the first team to lose their starting pitcher before completing the second inning in three consecutive games in postseason history after Greinke went out with a whimper.

Pivetta, meanwhile, put together a very solid start that will be lost in the conversation about the ninth inning — five innings, two hits, and three strikeouts with just one run on Bregman’s homer.

5. Tuesday’s game was the first of the series that really felt like postseason baseball — an intense crowd, high-leverage moments with big managerial decisions, enormous consequences, and — of course — ultimately a fanbase that was left either ecstatic or devastated.

The Astros needed Game 4. Game 5 will be a heavyweight battle. 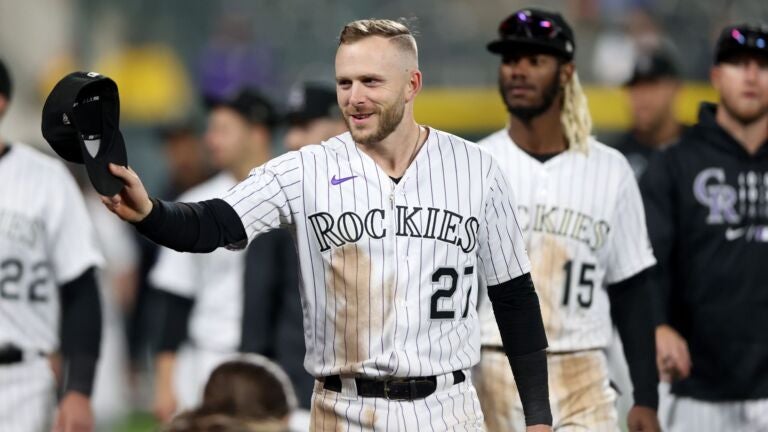