The Red Sox could be in the market for a splashy name in free agency, and according to MLB’s Jon Heyman, one potential target is Mets infielder Javier Baez.

Baez was a fan favorite in Chicago, where he was a key part of the Cubs’ 2016 World Series run. Known as a flashy defender with a tendency to hit the ball hard and strike out a lot, Baez looked like a big trade pick-up by the Mets when they dealt for him during the Cubs’ fire sale at the trade deadline. Baez did not ingratiate himself to Mets fans, however: As the team struggled and fans booed, Baez and teammates adopted a post-hit celebration of giving fans the thumbs down.

When Baez voiced his frustrations to the media, the Mets quickly reacted by backing the customers, not the players.

“These comments, and any gestures by him or other players with a similar intent, are totally unacceptable and will not be tolerated,” Mets president Sandy Alderson wrote in a statement. “…The Mets will not tolerate any player gesture that is unprofessional in its meaning or is directed in a negative way toward our fans.”

Baez’s best season was 2018 with the Cubs when he was runner-up for NL MVP. Baez was in the top 20 percent of the league in runs, hits, doubles, triples, homers, and RBIs (and, predictably, strikeouts) in addition to his defense. His numbers have fallen since (except for the strikeouts), but his strikeout rate fell a bit with the Mets to .285 per plate appearance, as opposed to .363 with the Cubs.

Still, Baez brings a lot to the table. He consistently hits the ball harder than nearly anyone else in the league (98th percentile in exit velocity in 2021, per Baseball Savant) and would add 86th percentile sprint speed to a Red Sox team that stole the second-fewest bases in the league last year. Baez averaged more than 16 steals per year in his last three full seasons.

The Red Sox have now been tied to several infielders. Xander Bogaerts is reportedly expected to opt-out after the 2022 season. 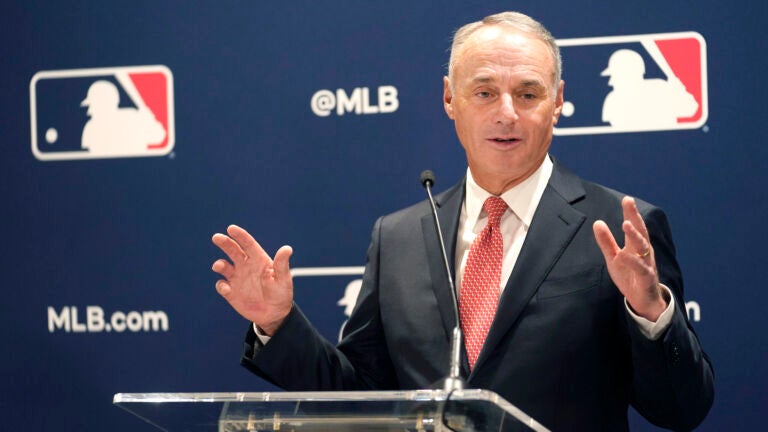