The Red Sox looked like they had a chance to beat the Angels on Wednesday with a runner on first in the bottom of the ninth, Bobby Dalbec at the plate and the game tied 4-4. Dalbec even teased a potential win, lacing a foul ball down the line, but a strike-him-out-throw-him-out double play ended the threat and forced extra innings.

The wheels came off fast.

Matt Barnes was on the verge of an impressive top of the 10th — with the mandatory runner on second, he started by coaxing a flyout from David Fletcher and fanning Jack Mayfield.

Then Angels third baseman Taylor Ward made him pay for a bad pitch.

The Angels, however, were just getting started. Mike Trout singled. Shohei Ohtani walked, and Alex Cora pulled Barnes from the game, but Anthony Rendon singled off the wall and drove in Trout.

Finally, Jared Walsh grounded any final Red Sox hopes deep into the dirt, hitting a three-run homer to give LA a 10-4 lead.

The Red Sox plated a run in the bottom of the ninth but couldn’t cut further into a sudden six-run deficit, falling to 10-15 with a 10-5 loss.

Entering the ninth, the Red Sox held a 4-3 lead, and Alex Cora made a pitching change — bringing in Jake Diekman with a runner on second. Diekman gave up an RBI single to Walsh, which evened the score at 4-4.

“We tried to get 27 outs,” Cora said. “I think we didn’t keep the ball in the ballpark, and then at the end, we walked a lot of people. We had the right matchup for the 27th out and Walsh put a pretty good at-bat, got a base hit and then after that we didn’t execute pitches. They’re a good offensive club. They hit the ball out of the ballpark and they took advantage of that.

“We had Trout 0-2 and we ended up walking him and then Ohtani, we walk him too. We got Rendon with a 2-1 slider, but you know it’s Walsh against Diekman, right there. You know that’s the matchup that we’ll take any time. You know, 3-2 slider, he fouled one off and then he got one and got a base hit.”

Barnes — who is part of a disastrous Red Sox bullpen — now has an ERA of 5.87 for the season.

“And the offense, too right?” Cora said, when asked about the bullpen. “I think it’s a collective effort — from the staff to the players to everybody. We’re not happy with the results, and we have to do a better job in close games. Good teams do that, they win close games, and so far we haven’t done that.” 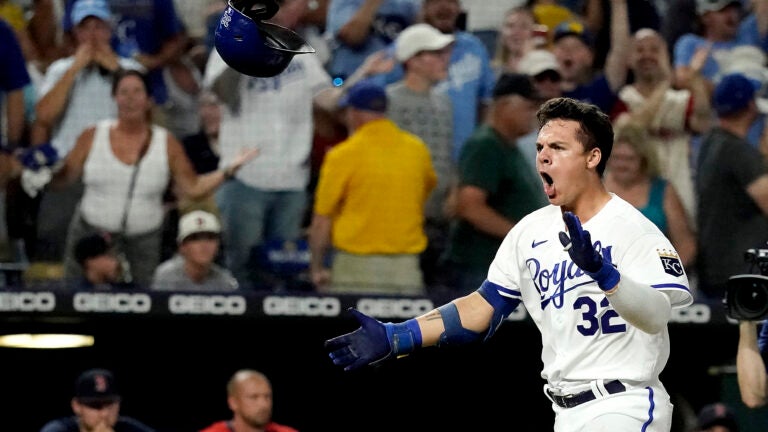