Josh Winckowski makes his big league debut Saturday. The 23-year-old will get the start for the second game of the Red Sox’ doubleheader against the Orioles.

Here are seven things to know about Winckowski as he makes his first career start.

He was one of the players acquired in the Andrew Benintendi trade.

When Red Sox chief baseball officer Chaim Bloom traded Benintendi to the Royals in February 2021, he decided to acquire several minor leaguers as opposed to a big leaguer. Winckowski was one of the five players that went to Boston as part of the three-team deal, which also included the Mets, joining Franchy Cordero and three players to be named later (which eventually became outfielder Freddy Valdez plus pitchers Grant Gambrell and Luis De La Rosa).

It was actually the second time Winckowski was traded during the 2021 offseason. The Blue Jays traded him to the Royals two weeks earlier as part of a deal for pitcher Steven Matz.

He had a strong 2021 season with Double-A Portland.

After the 2020 minor league season was canceled due to the COVID-19 pandemic, Winckowski hit the ground running with the Portland Sea Dogs in 2021. He went 2-0 in his first five starts, allowing four earned runs over 27 innings pitched (1.33 ERA) with a 26:9 strikeout-to-walk ratio.

Winckowski continued to pitch well through the duration of the Double-A season, going 8-3 over 20 starts with a 4.14 ERA and had 80 strikeouts to 30 walks over 100 innings pitched. For his performance, Winckowski won the Sea Dogs’ Pitcher of the Year award for 2021.

Winckowski got a late-season callup to Triple-A Worcester, where he made two starts. He lasted six innings in both starts, giving up two earned runs on three hits, no walks, and six strikeouts in the first one. Wincokowski improved in his second Triple-A start, allowing just one earned run on two hits, three walks, and seven strikeouts to earn a win.

He’s gotten off to a solid start in 2022 with Triple-A Worcester.

Winckowski started the 2022 season right where he left off in 2021. Through seven starts with the WooSox this season, Winckowski is 1-1 with a 3.13 ERA. He had a solid first start of the season, giving up one earned run on three hits, one walk, and four strikeouts over five innings pitched to earn the win over Jacksonville.

He’s had a couple more impressive starts since his season-opener. On May 5 against Toledo, he gave up just one run on two hits, no walks, and eight strikeouts in five innings pitched. Two starts later, Winckowski pitched six scoreless innings against Scranton/Wilkes-Barre, striking out nine hitters and walking none.

However, Winckowski had his worst outing of the season in his most recent start. He gave up five earned runs on six hits, no walks, and six strikeouts over six innings pitched against Scranton/Wilkes-Barre on May 22.

He isn’t too highly rated as a prospect.

Winckowski’s put up solid stats through his first two seasons in the Red Sox organization. But scouts don’t seem to view Winckowski in high regard.

A big reason why Winckowski doesn’t rank too highly as a prospect is that most evaluators don’t believe he has a tremendous ceiling. SoxProspects.com believes Winckowski can be a multi-inning reliever with the ceiling of being a backend starter.

“Could be very effective in a bulk role, in which his lack of strikeout potential with his fastball would not be as much of an issue,” SoxProspects.com wrote in its scouting report of Winckowski. “Slider misses more bats than his changeup at this point, but still does not at a very high level. Margin for error is slim, as he has to rely on commanding his pitches and generating weak contact. To stick as a starter long-term, needs to make strides with his command and improve his slider to the point where it can be counted on as a consistent bat-missing pitch at the major league level.”

He has five pitches in his arsenal.

Winckowski’s fastball typically travels in the mid-90s but touched as high as 99 mph during an outing in the Arizona Fall League last season. He shared with WEEI’s Rob Bradford how happy he was to see his fastball speed improve during the 2021 season.

“The changeup definitely helps, but the fastball is a tick or two up this year,” Winckowski said. “If I have to be honest, I think it has been barreled twice this year. My fastball just feels at a whole different level right now. I’m just not giving up a lot of hits on it. Even if they are getting hits, it’s not super solid contact.”

Winckowski throws a hard changeup, which sometimes travels into the low-90s. The Blue Jays told Winckowski he couldn’t be a starter by throwing such a hard changeup, according to Bradford. Winckowski told Bradford that the Portland pitching coaches let him embrace the challenge of figuring out how to perfect his changeup.

“Coaches will also say, ‘Well, Zack Greinke throws a hard changeup.’ Well, Zack Greinke flips a 69 mph curveball in there and I don’t. I don’t do that,” Winckowski said. “I will manipulate my slider to get a little bit bigger at times but even that gets down to 83 at the worst, but mostly it’s at 86-87. So my entire range gets to 8-10 mph. But it has had really good action this year and I’ve been trusting it a little more and throwing it a bunch.”

Winckowski is an Ohio native, born and raised in Toledo. But in high school, he moved down to Florida and attended Estero High School, which is 20 minutes away from Fort Meyers, where the Red Sox spend spring training.

So, as a high schooler with big-league ambitions, Winckowski made his way to Red Sox (and Twins) camp frequently.

“Obviously as a younger guy having the ambitions that I did I went over the Twins and Red Sox spring trainings as a fan,” Winckowski told Bradford. “I never got really close, face to face with somebody in spring training. They’re doing their thing.”

Winckowski shared with Bradford that the lone Red Sox player he got to meet during those trips was David Ortiz, crossing paths with the Boston legend at a nearby suit shop.

He’s a constant Twitter user, but for professional reasons.

There have been many instances in which young athletes using Twitter end up getting in the news for the wrong reasons.

Winckowski is a frequent Twitter user himself. However, he doesn’t appear to be much of a tweeter. He definitely lurks, though.

In an interview with MassLive’s Christopher Smith, Winckowski shared that he logs on to Twitter after minor league games to see the top highlights from MLB that day. Two pitchers’ highlights he seeks out are Jake DeGrom’s and Gerrit Cole’s because of how effectively they’re able to use their fastballs.

“The way they assert themselves with their fastballs and dominate with that in the zone,” Winckowski said. “Mixing speeds is good and hitting location is good. Obviously that’s always an important part of baseball. But I think when your fastball plays at the level that they have it play at, it just opens up so much. I kind of try to have that in my own pitching style. If your fastball is working, it just opens up so much for you. So I think the way they can use their fastball in the zone is what sticks out for me.” 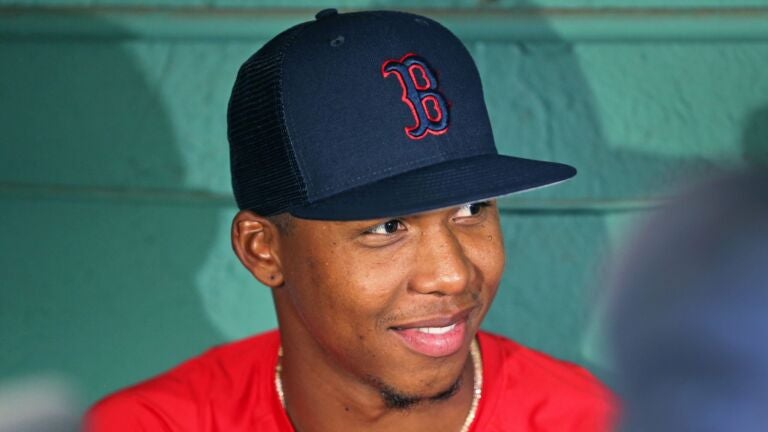 5 things to know about Brayan Bello, the most anticipated Red Sox pitching prospect in years