The Red Sox dug themselves a bit of a hole at the start of the season, but they have a chance to climb out during a crucial stretch over the next month.

Before the All-Star Break, which begins on July 18, the Red Sox play division opponents 17 times. Six of those games are against the Yankees, who lead the division by 11 games. They also face the Rays seven times, as well as the Blue Jays for a three-game series that begins on Monday.

“This next month is going to tell a lot,” J.D. Martinez told reporters on Sunday. “This is going to be the month where we really see where we’re at. I’m looking forward to it.”

The Red Sox’s recent surge — which includes an active seven-game winning streak after they knocked off the Guardians 8-3 on Sunday — propelled them over the Rays by 1.5 games in the AL East standings and in the wildcard standings. The Blue Jays are tied with the Rays, while the Guardians are now 3.5 games behind the Red Sox.

The Yankees will be the toughest test, although they have cooled off slightly — 6-4 in their last 10 games. Still, they beat the Astros 6-3 on Aaron Judge’s walk-off three-run homer in the 10th inning and have MLB’s best record by a significant margin.

“It sucks that we started the year off the way that we did, but we’re making up ground,” Martinez said Sunday. “I don’t look at the standings because I know the Yankees are playing out of their minds. But that’s who we want to track down. It’s still a long season and a lot more time left.”

First pitch between the Red Sox and Blue Jays is scheduled for 6:07 p.m. on Monday.

“We know we’re good and we gotta keep working,” Alex Cora said. “We’ve got to keep working hard for what we are trying to accomplish, but we feel good. Now, we get ready for Toronto. Obviously, they’re one of the big boys in the division, but we’ll be ready for it.” 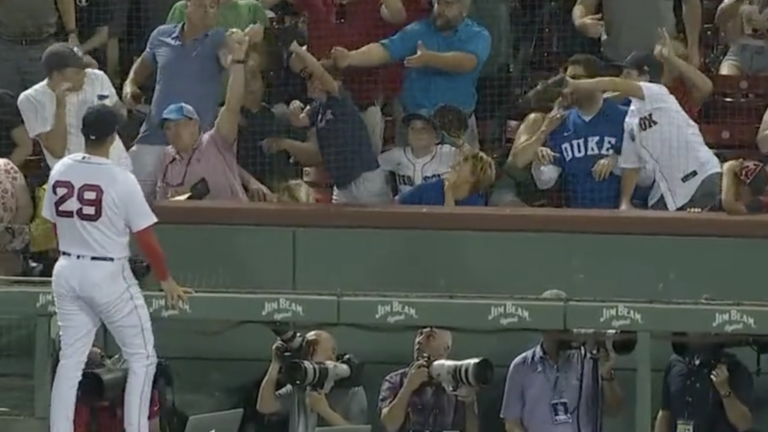