On May 30, Rich Hill couldn’t get an out in the fifth inning, blown out by 10 runs by Baltimore. On Sunday, he struck out all-world José Ramirez in Cleveland on a fastball that didn’t crack 91 miles per hour.

Night and day. For him and his team.

Boston’s turnaround had already begun when it dropped three of five to the last-place (but relatively strong) Orioles, but has hit hyperdrive in June. No team has allowed fewer runs per game (2.91), and no team can claim better than 19 wins in 23 games. Not even the Yankees (19-5), who are still on a 117-win pace.

Given a month out of the American League East grinder to prove themselves worthy of our (and management’s) attention, the AL’s second-worst team on the morning of May 9 is now its third-best. The much maligned bullpen has fallen together. The impatient, chase-happy offense is now, as manager Alex Cora noted Sunday, the “total opposite.”

It is, in this likely final year for the title-winning 2018 core, looking playoff worthy. But looming is when that will truly be tested.

“This next month is going to tell a lot,” J.D. Martinez told reporters after this weekend’s sweep of Cleveland, which itself had been on a 15-5 tear. “This is going to be the month where we really see where we’re at.”

Twenty-eight days, 23 games, 20 against their three main competitors in the division. (Imagine if the Orioles spend next year.) When the Red Sox next see Cleveland on July 25, the trade deadline will be roughly a week away, and the AL East four will be that much closer to perhaps all making the playoffs.

Thus, a quick refresher course about the real competition.

For all our sakes, let’s hope the voluntary absences this week of Jarren Duran (batting .327 with four steals in 13 games) and Tanner Houck (six saves in as many chances) are non-factors. Sacrifice is part and parcel of high-level sports, and their decisions to make themselves ineligible are nothing less than “me” over “team,” regardless of how anyone feels about Canada’s vaccination stance.

The Jays haven’t been huge beneficiaries to the policy, as some thought they might be. They have baseball’s sixth-best home record (21-14), but that’s hardly out of the realm for a top-10 team, even if the road there hasn’t been as expected.

Spending big to assemble a deep rotation, Hyun Jin Ryu had season-ending elbow surgery two weeks ago, Yusei Kikuchi has lacked command and confidence for a month, presumed ace José Berríos has an ERA of nearly 6.00 after getting shelled on Sunday, and Toronto’s lost eight of 12 largely due to needing to lean on a bullpen leaning on Triple-A parts due to copious injuries.

At least the offense, which started slow, has carried its load. The entire lineup has been better than league average, with Vlad Guerrero Jr. (1.001 OPS, eight home runs in June) picking up for where George Springer (.947, 6 HR in April versus .695 and four in June) has left off.

With Boston’s visit immediately followed by five games in four days against Tampa Bay, Toronto — just 12-14 in division — views this week much the same as the Red Sox do.

A season basically in mirror of the Red Sox, at least on the record side. Starting 18-10, Tampa has played .500 baseball for months, sweeping the Pirates this weekend in St. Petersburg despite blowing leads in all three games.

“These are momentum-builders. It’s good for this group of guys,” manager Kevin Cash told reporters on Saturday night. “We are a young group right now, and they need to feel good.”

Their latest creation is Isaac Paredes, who has 10 home runs in 108 plate appearances this season after clubbing just two in roughly 60 games the previous two years. The lesser part of Tampa’s trade for Austin Meadows in April, the 23-year-old has shown a patience beyond his years at the plate, and now looms in the lineup with Wander Franco, who returned this weekend after missing a month with a quad strain.

That said, it has not been the typical year at the St. Pete Pinball Machine, where even the sorts of heavy injuries they’ve weathered this year — Kevin Kiermaier and Manuel Margot hit the list last week, joining three-fifths of the starting rotation and no less than five relivers — usually don’t slow them down. These Rays, however, lead the majors in both outs made on the bases and times caught stealing, the sort of fundamental flaws they often avoid.

Still, they’re close. Tampa’s lost seven of 10 to New York, but six of the losses were by two runs or fewer. Starter Shane McClanahan is a Cy Young candidate, and they’re still at least treading water at a time plenty of teams would’ve disappeared beneath the waves.

It’s hard to overstate what the Yankees are doing, actually pulling a game further ahead of the Red Sox during a run in which Boston has gone 32-12. New York’s got 10 walk-off wins in just 40 home games, including two this weekend over AL No. 2 Houston sandwiched around being no-hit.

“We don’t sweat anyone,” manager Aaron Boone told reporters Sunday, after New York erased a three-run deficit in the ninth. “We’ve got a great team and we know it.”

Gerrit Cole, Nestor Cortes, and Jameson Taillon have been the best top three in the majors, each with an ERA south of 3.20. Aaron Judge is nearly halfway to making his balking at a $230 million contract offer a smart move. It’s all a mere preamble to October, where the expanded playoffs mean anything can happen more than ever before, but New York figures to coast home like no one else in the sport.

The Red Sox, for their part, understand catching them isn’t their primary objective.

“If we keep doing what we’re doing, we’ll be fine at the end of the year,” Ryan Brasier told reporters during the Detroit series. “Your record doesn’t matter once you get to the playoffs.”

In ripping off 19 of 23, the Red Sox have made clear they still belong in that conversation. But what this next month brings will speak even louder. 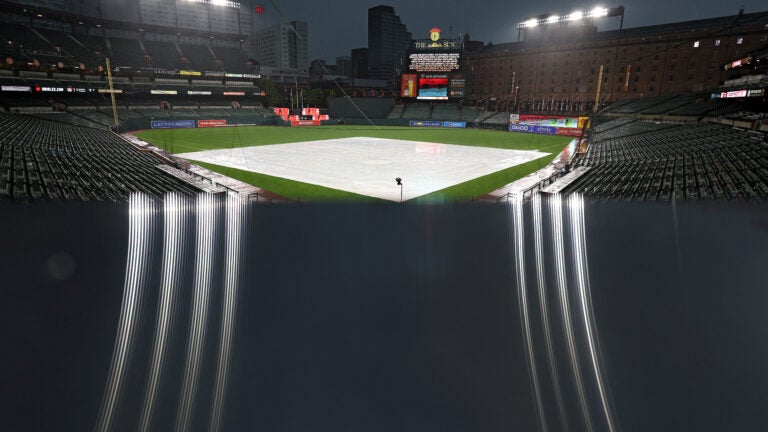 Orioles tied for wild card after rainout with Blue Jays