The 2022 MLB Draft, which begins on Sunday, won’t be as exciting for the Red Sox as last year’s.

Boston held the No. 4 overall pick and the fourth pick in every round (outside of the compensatory and competitive balance rounds) in the 2021 MLB Draft. Because their 2021 season was much better than their 2020 season, the Red Sox won’t pick until the 24th pick of the draft this year.

There is a similarity, though, for the Red Sox between last year’s draft and this year’s draft. Former Vanderbilt pitcher Kumar Rocker is once again a popular prospect draft analysts have the Red Sox selecting with their first-round pick.

Rocker was once projected to be one of the top selections in the 2021 MLB Draft, but medical concerns led to him dropping to the 10th overall pick, where the Mets selected him. However, New York didn’t sign Rocker, so the righty became draft eligible again this year.

Rocker didn’t go back to Vanderbilt. Instead, he signed with the Tri-City ValleyCats, who play in the Frontier League. The 22-year-old’s had a strong stint, going 1-0 with a 1.35 ERA in five starts. Rocker, who had surgery on his right shoulder for a “non-pitching-related minor injury,” according to his agent Scott Boras, has been throwing at high speed again. His fastball traveled between 96 to 98 mph during a starting with the ValleyCats, according to ESPN’s Tim Keown, to go along with a “wipeout slider and a hard curveball that buckles the knees of anyone looking for either of the other two.”

The Boston Globe’s Alex Speier noted that the Red Sox are the only team to not select a pitcher in the first two rounds in the last four years. ESPN’s Kiley McDaniel believes the Red Sox are looking to change that on Sunday.

“It seems like Rocker’s range starts around 13 and ends around 40, with bigger budget contending-type teams mentioned almost exclusively,” McDaniel wrote. “The Red Sox seem like a team that would like to prioritize building near-the-majors pitching depth and is value-focused enough to see the opportunity here. The Sox have mostly been tied to college players who maybe shouldn’t make it to this pick more than specific guys they like more than the industry, so this also fits in that regard.”

There aren’t many college pitchers projected to go in the first round of the draft. McDaniel only has Oklahoma’s Cade Horton, Oregon State’s Cooper Hjerpe, Oklahoma State’s Justin Campbell, Alabama’s Connor Prielipp, Gonzaga’s Gabriel Hughes, and East Carolina’s Carson Whisenhunt going in the first 40 picks of his mock draft. So, Rocker could be the only first-round graded prospect who is more Major League ready that is available for the Red Sox when they’re on the clock.

“The Red Sox were in on Rocker with the No. 4 overall pick last year before Marcelo Mayer fell to them, and there’s plenty of reason to think they’ll be interested again even after undisclosed concerns about his shoulder and elbow caused his deal with the New York Mets to fall through,” Reuter wrote. “He’s been lighting up radar guns pitching in the independent league in preparation for the draft, and he still has the same electric stuff that racked up 321 strikeouts in 236.1 innings at Vanderbilt.”

The Athletic’s Keith Law also believes that the Red Sox are “seriously considering” Rocker if he falls to them at 24. But Law has Rocker going to the Phillies with the 17th overall pick in his latest mock draft after projecting him to fall to the Red Sox’ pick in his previous mock.

Law, like several other draft experts, has Boston selecting a hitter in his mock draft. He has the Red Sox selecting Florida second baseman and outfielder Sterlin Thompson.

“Thompson is a draft-eligible sophomore with a pretty left-handed swing and the potential for plus power, showing a solid two-strike approach for the Gators this spring while hitting well even in SEC play,” Law wrote in his scouting report of Thompson. “He’s a below-average runner who’s limited to an outfield corner and could end up at first base, which definitely caps his value upside. His best tool is the hit tool, which is the hardest one to evaluate, and if he doesn’t in fact end up with a 55 or 60 hit tool, he’s not going to have much of a role in the majors.”

CBS Sports’ Mike Axisa also has the Red Sox selecting Thompson at 24, touting his versatility as a reason why Boston could select him.

“This is where the run of second-tier college bats is expected to begin,” Axisa wrote. “The Red Sox have been connected to all the college hitters expected to go in this range this spring, especially the offense over defense players. Thompson is a sweet swinger who held his own when put at second base at times this season, and Red Sox chief baseball officer Chaim Bloom loves versatile players. It fits.”

Boston selected a Florida player with one of its top picks in last year’s draft, selecting outfielder Jud Fabian with the 40th overall pick. But Fabian didn’t sign with the Red Sox, giving them the 41st overall pick in this year’s draft as compensation. McDaniel mentioned that he thinks the Red Sox are “on” LSU infielder Cade Doughty with that pick.

“Doughty has exhibited nice feel for the barrel and a quick, compact right-handed swing since he was a regular member of U.S. national teams in high school,” MLB.com wrote in its scouting report of Doughty. “One of the better contact hitters in the Southeastern Conference, he has grown into at least average power after adding 20 pounds since arriving on campus. He’s an average runner with good instincts on the bases.”

But McDaniel actually has the Red Sox selecting right fielder Roman Anthony with the 41st pick. Anthony is an Ole Miss commit who is known for his power-hitting ability. 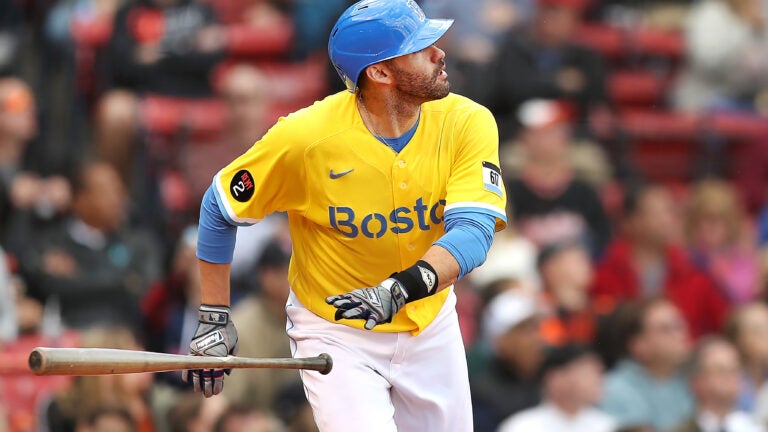