The Aug. 2 trade deadline is on the horizon, and the slumping Red Sox find themselves at a crossroads.

While it’s possible they won’t do anything, it’s appearing more and more likely that they will. Rumors have swirled in recent weeks about specific players coming and going to help them re-tool their roster.

Here are some names to keep an eye on as talks intensify and the deadline nears.

5 Red Sox players who could be traded

All signs are pointing to the Red Sox keeping Rafael Devers, Xander Bogaerts, and Trevor Story, but it seems as though just about everyone else is fair game.

J.D. Martinez’s name is surfacing daily. The designated hitter, who turns 35 in late August, is in the final season of his five-year, $110 million deal.

Martinez has had a decent season in some ways, hitting .289 with 30 doubles, but his power numbers are significantly down. He has just nine home runs and 38 RBIs and has only played 85 games. Even so, he can still provide pop in the middle of the lineup to a contending team looking for one more piece.

When asked if he expects to be with the Red Sox after Tuesday, Martinez didn’t exactly give Red Sox fans reassurance.

“Not if we don’t start winning. That’s about as simple as I can put it,” Martinez said Thursday. “I would understand it. I wouldn’t be upset about it. Of course I want to be here, stay here. I’m a lot more comfortable here. I would prefer the club wins today, starts a winning streak, and makes it real hard on them.”

The Boston Globe‘s Pete Abraham reported that Vázquez has “received no assurances” that he’ll stay with the Red Sox.

Vázquez is one of the more reliable catchers in baseball, and his .280 average is significantly above his career mark of .262. He, too, is on an expiring contract, and the Red Sox do have a reliable backup in Kevin Plawecki to help fill the void if Vázquez is dealt.

According to The Athletic‘s Ken Rosenthal, the Mets “could pivot” to targeting Martinez and Vázquez together.

The 6-foot-6 right-hander has had an excellent season, compiling a 6-1 record and 2.69 ERA, but he simply hasn’t been healthy.

If the Red Sox front office decides the team can become a contender this year, trading Wacha wouldn’t make sense. If the Red Sox want to get younger value back and build for the future, they could get some legitimate assets in return for Wacha.

The right-handed reliever is just 0-3 with a 7.94 ERA this season and is struggling to regain his old form. He’s been on the injured list with right shoulder inflammation since late May but is gradually making his way back.

It’s possible a contending team could take a risk, with the hopes that Barnes could return to his old self to help a squad amid a pennant race.

It could be similar to a N’Keal Harry situation, where the Red Sox have given Franchy Cordero a chance and seen enough from him to determine he’s not the answer.

Perhaps another team would bring him aboard to see what he can offer and the Red Sox could get cash or more prospects in return. When Cordero gets ahold of one, the ball travels, but he’s far too inconsistent both at the plate and in the field at the moment.

5 players the Red Sox could trade for

While it’s highly unlikely the Red Sox will acquire Juan Soto and Shohei Ohtani (never know, but don’t bank on it), there are some other well-known players they could target.

One of those names is Josh Bell, a switch-hitter on the Nationals who can play first base or designated hitter. Bell is hitting .306 with 13 home runs, 54 RBIs and has appeared in 100 games this season.

Bell, who is about to turn 30, has drawn interest from the Mets, Astros, Blue Jays, and, yes, the Red Sox, according to The Athletic‘s Jim Bowden.

The Red Sox currently have Bobby Dalbec and Cordero at first, and neither has performed so far this season. Sometimes they even put Vázquez there out of necessity, which is far from ideal.

MLB.com’s Mark Feinsand called Frankie Montas “a near lock to be traded.” He listed the Cardinals, White Sox, and Yankees as possible suitors, but there’s a chance the Red Sox could enter the mix as well.

Montas, 29, has a 3.18 ERA and appears to be rounding into form following a shoulder injury. The Yankees will likely outbid them, but it shouldn’t be ruled out.

Noah Syndergaard isn’t quite the dominant pitcher he once was, but he could still help a team in need of another arm.

With Chris Sale sidelined for the foreseeable future, the Red Sox could have a formidable 1-2-3 with Nathan Eovaldi, Wacha, and Syndergaard.

The Red Sox could use another versatile option to play all over the field, and CBS Sports’ Matt Snyder listed him as a possible target.

Happ, 27, will become a free agent after 2023. He’s an everyday left fielder but can also play first base and elsewhere as needed. Plus, he’s a switch-hitter.

“If the Cubs make Happ available, this seems like a decent fit,” Snyder said.

Mancini is hitting .272 with 10 homers and 41 RBIs in 90 games, yet it appears he may not be a member of the Orioles much longer.

He was diagnosed with stage 3 colon cancer at age 27 and missed the entire 2020 season. Mancini is now back in the Majors playing at a high level.

He’s an easy player to root for and one Red Sox fans would enjoy watching. 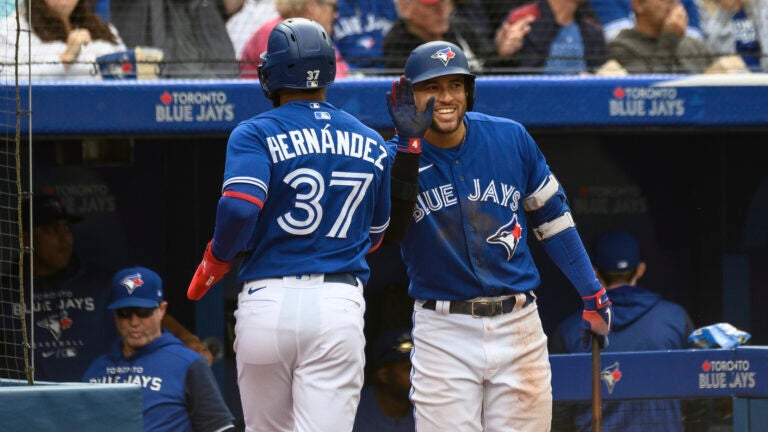