The Blue Jays began the day with a 1 1/2-game lead over Seattle atop the wild-card standings.

Ross Stripling and four relievers combined on a four-hitter as Toronto shut out the Red Sox for the second straight day. The Blue Jays blanked Boston 9-0 Friday night.

Jansen homered, doubled and singled and Bo Bichette went 4 for 4 as Toronto opened October with a 21-hit outburst, delighting a sellout crowd of 44,612.

The Blue Jays are 15-3 against the Red Sox this season, matching the most wins they’ve ever had in a season against a single opponent. Toronto went 15-4 against Baltimore in 2002 and again in 2010.

Toronto’s 15 wins against Boston are the most by any AL team against a division opponent this season. Houston won 14 of 19 meetings with Texas.

Anthony Bass worked the seventh, David Phelps pitched the eighth and Jordan Romano got two outs in the ninth before Adam Cimber came on and struck out Triston Casas to finish it.

Jansen hit an RBI single in the second inning and doubled home two runs in the third.

Hernández and Jansen each hit solo home runs off Zack Kelly in the fifth. Hernández connected for the 23rd time, while Jansen’s homer was his 15th.

Blue Jays: Interim manager John Schneider said INF Santiago Espinal has “sped up” in his recovery from a strained left oblique. The Blue Jays hope Espinal and OF Lourdes Gurriel Jr. (left hamstring) will be able to return in the final series of the regular season at Baltimore next week.

The Red Sox reinstated RHP Kaleb Ort from the restricted list and recalled RHP Josh Winckowski from Triple-A Worcester. Boston optioned RHP Tyler Danish and OF Jarren Duran to Triple-A. Ort became eligible to come off the restricted list with the expiration Saturday of a Canadian requirement preventing foreign nationals who aren’t vaccinated against COVID-19 from entering the country.

Hitting for Bichette in the seventh, infielder Otto Lopez collected his first big league hit with a single up the middle.

Boston’s Xander Bogaerts went 0 for 4 with a strikeout on his 30th birthday. 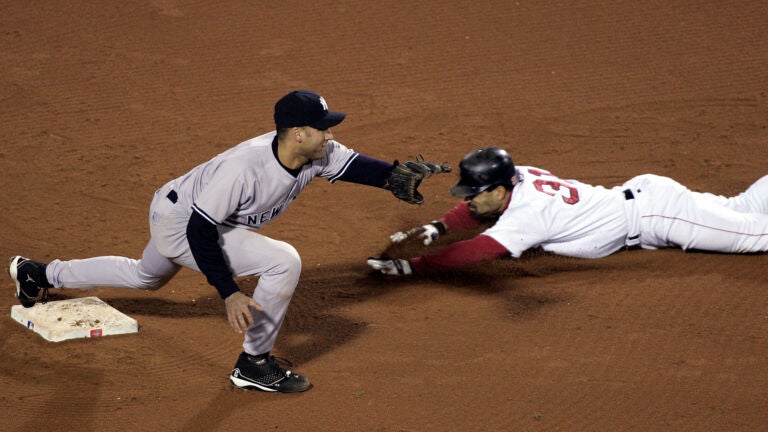 Yankees sought inspiration from 2004 Red Sox prior to ALCS sweep