Capitals center Nicklas Backstrom’s goal 2 minutes and 56 seconds into the second overtime lifted the Washington Capitals to a 2-1 victory at TD garden Saturday in Game 2 of the Eastern Conference quarterfinals.

The Capitals, not known for their toughness and defense, frustrated the Bruins’ top two scoring lines while goalie Braden Holtby turned away 43 of the Bruins’ shots as the Capitals return home with the series tied, 1-1.

Game 3 will be Monday night at the Verizon Center in Washington.

Tim Thomas, whose playoff shutout streak was snapped at 161:41 when Troy Brouwer scored at 17:57 of the second period, had 37 saves.

The Capitals got on the board first in the second period when Brouwer received a nice setup from Alex Ovechkin.

The Bruins’ third line responded, though, as Benoit Pouliot tied the game at the 12:13 mark of the third period off assists from Brian Rolston and Chris Kelly, the hero of Game 1.

The Bruins’ top two lines continued to be frustrated by the surprisingly tough Capitals defense. Brad Marchand and Patrice Bergeron just missed on a number of scoring opportunities and Tyler Seguin was effectively neutralized.

2:56: Nicklas Backstrom scores the winner as the Capitals send the series back to Washington tied at 1.

12:50: The Captials have mounted constant pressure on Thomas.

9:59: The Bruins’ offensive flow has gotten better as the game has developed, especially in this period.

6:53: The Bruins’ third line again put pressure on Holtby by getting him away from the net, but couldn’t convert.

4:58: The Bruins placed dominated in the Capitals zone but couldn’t get the go-ahead tally. The Capitals call a timeout to regroup.

Here we go again: Just like Game 1, we are headed to overtime.

18:30: Marchand’s frustrations continue as he missed a chance at point blank range.

17:34: Things are getting a bit testy as Thomas shoved a Capital player in a scrum for the puck.

12:13: The Bruins get on the board as a charging, falling Benoit Pouliot got the puck past a falling Holtby. Kelly and Rolston get the assists.

11:11: Capitals goalie Braden Holtby has continued to frustrate the Bruins.

9:18: Fast, furious action, but the Bruins couldn’t capitalize on several opportunities in front of the net.

2:42: Brad Marchand had another scoring chance, but missed again.

Tim Thomas’s playoff shutout streak was snapped at 161:41 when Troy Brouwer scored at 17:57 of the second period. His previous playoff goal allowed was a Maxim Lapierre score at 17:34 of the third period in game 6 of the Stanley Cup Finals against Vancouver.

Despite outshooting the Capitals, 12-7, in the period, the Bruins trail. Brouwer pushed the puck right under Thomas’s leg to give the Capitals their first goal of the series.

At the end of the second period, the teams scuffled before heading to the locker room.

17:57: The Capitals get on the board as Brouwer poked the puck right under Tim Thomas in front of the net. Ovechkin and Alzner get the assists.

9:48: The Bruins’ offensive aggressiveness has increased. They have outshot the Capitals, 10-4, in the period but it’s still scoreless.

3:54: The Bruins fail to score on second power-play chance. Patrice Bergeron just missed a goal on a shot in front of the net.

1:54: Capitals defensman Roman Hamrlik called for two-minute cross-checking penalty. It is the second power-play chance for the Bruins.

The end of the first period has arrived. The Capitals failed to capitalize on two power-play chances and the Bruins failed on their lone opportunity.

18:30: David Krejci just missed a scoring chance as he came across the middle before firing a shot on Holtby.

6:51: Capitals goalie Braden Holtby has been under constant duress early in the game.

3:57: Rich Peverley missed on a good scoring chance from atop the right circle.

Pregame:
Game 2 of the first round of the Eastern Conference playoff between the Capitals and Bruins will start in a few minutes. 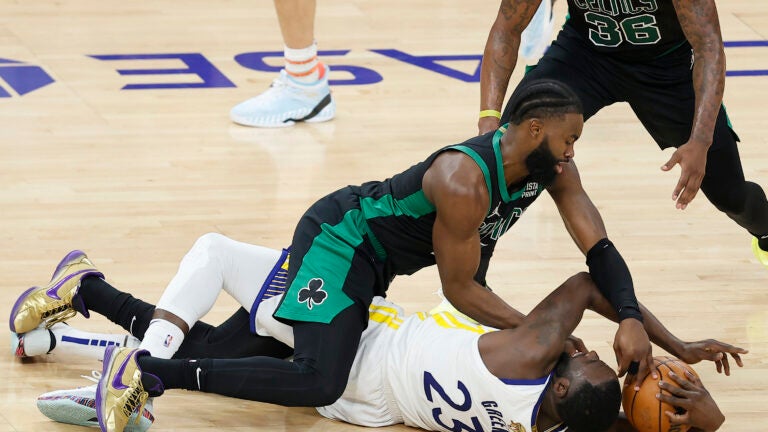 Andrew Wiggins, Warriors’ defense give Celtics problems to go up 3-2 in NBA Finals