The Bruins will never say die. It’s an attitude that may get them through one of the toughest stretches in recent team history.

After falling behind 2-0 in the first period to the Columbus Blue Jackets, the B’s, looking lethargic and disinterested at times, picked up the pace in the second period before erupting in the third. Their resilience, which led to a 4-3 win in a shootout, was on display big time as the game wore on.

After Dennis Seidenberg finally got the B’s on the board with a slapper from the neutral zone that trickled through fomer Vezina Trophy winner Sergei Bobrovsky, Boston began to surge all over the ice. Matt Bartkowski pitched in with a couple of assists. Daniel Paille, who hadn’t scored in a mind-boggling 37 games, netted the go-ahead goal. And even though it took them just 1:15 after taking the lead to give it right back, the Bruins were hardly discouraged. They controlled play throughout the overtime (outshooting Columbus 7-1 in the extra session) and got some splendid goaltending from Niklas Svedberg down the stretch.

More magic from Svedberg was necessary in the shootout, which went seven rounds without either team scoring, for the B’s to hang on. And when Alexander Khokhlachev, playing in place of the once again-missing David Krejci, finally ended the game, you could almost hear and feel the collective sigh of relief from the Bruins through the TV.

There are so many injuries and so many players who are depended on not being dependable (hello, Milan Lucic and Loui Eriksson!) that gritty battles like this one are going to have to continue to be the norm for the Bruins until Krejci and Zdeno Chara — among others — are able to come back anywhere near full strength. If this week, with tough wins over Carolina, St. Louis and now Columbus on the road, is any indication, the Bruins are well aware that’s the case. 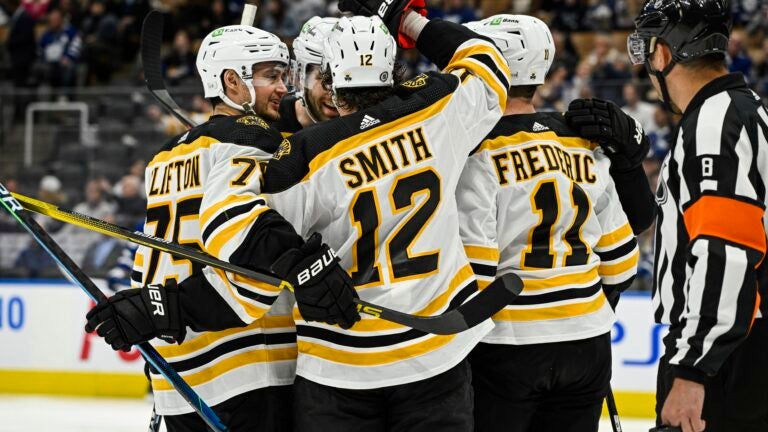