The Bruins face an offseason of uncertainty after missing the playoffs for the first time since 2006-07. What we do know is that Peter Chiarelli is gone and Claude Julien’s fate will be decided by a new general manager.

Some of the Bruins on the roster may find a new home this offseason. That will be a story for another day. For now, the Bruins Daily staff evaluates the B’s roster with the year-end report cards. Here is a look at Part 2 grading Boston’s defense and goaltending. Click here to see how the team’s forwards fared in Part 1.

Zdeno Chara (by Bob Snow) — At 38 years old, the 6-foot-9 captain played his lowest game total in a Bruins’ uniform at 63. Eight goals and 12 assists for 20 points are also lows since 2006. Missing 19 games and having a long layoff for the All-Star break should have given the big guy a lot of rest for the second-half push to the playoffs. After he returned on Dec. 11, he played 54 games with six goals and 11 assists for 17 points. His first goal of the season at home was February 28; he did not score a game-winner all season.

While his valued leadership is unquestioned, there are obviously now wear-and-tear questions on the ice. Chara is under contract for five more years to age 43 for $30 million.

Dougie Hamilton — The third-year defenseman had his share of ups and downs — as all young players do — but Hamilton continues to impress. When Chara went down with his knee injury in the first month of the season, Hamilton’s role increased from Chara’s fellow defensive pair to the top blue-liner on the team, and he held his own for the most part.

But an injury that cost Hamilton the last 10 games of the season couldn’t have come at worse time for the Bruins and their 2011 first-round pick. The same defensive breakdowns that hindered the Black and Gold earlier in the season, picked up again in the last two weeks, and it’s safe to assume that having Hamilton could’ve at least eased the effect of those mental lapses.

Hamilton enters the offseason as an RFA. The question now: does he go through arbitration, or will the new GM somehow maneuver his way around the B’s cap situation and sign him to a long-term contract? Either way, Hamilton still needs to be a part of the team’s future. — Tim Rosenthal

Dennis Seidenberg — Seidenberg played his first full season since 2010-11. Since missing the second half of the 2013-14 season after tearing his ACL, Bruins fans have noticed a significant drop-off in Seidenberg’s play. The “German Hammer” used to be the unquestionable blue-liner in Boston always willing to bang bodies, play along the boards and protect the house; however, this season has seen him moved all around the top. That’s not to say it’s all Dennis’s fault though. The revolving door of injuries that was the Bruins defensive corps certainly did nothing to help players get comfortable where they were.

At minus-1 and with only 14 points in 82 games, Seidenberg ultimately had an underwhelming season. He struggled in his own end at the start, seemingly still hesitant to get back into the dirty areas while lending very little to the offensive side. Certainly nobody expects the shutdown defenseman to be a scorer or playmaker, but Seidenberg has proven he knows how to create offense from defense, and a game that starts at the backend has always been crucial to the Bruins success. With a wealth of young and talented blue-liners like Dougie Hamilton, Zach Trotman, and others, ready to take their talents to the NHL, the Bruins must ask if a contract as large as Seidenberg’s is worth what he brings to the table.

Not all was lost though as the end of the season produced a sliver of hope, with Seidenberg and the rest of the defense seemingly sensing the urgency, which bodes well for next season. For now, Seidenberg is still a member of the black-and-gold, but if he wants to assure himself a future in Boston, it will require a much better effort than he showed through most of this season. — Adam Bunnell

Matt Bartkowski — With injuries to Adam McQuaid, Kevan Miller, Hamilton, and Chara, Boston’s blue line was depleted. After former GM Peter Chiarelli traded away Johnny Boychuk, Bartkowski needed to make the most of his chance. There were times where Bartkowski showed great puck moving ability up ice, but, for the most part, the 26-year-old committed costly turnovers in both ends of the ice. In 47 games played, Bartkowski had just four assists while rocking a minus-6 rating.

Not only do the B’s need to re-tool their offense, but they also need to part ways with Bartkowski. — Chris Chirichiello

Torey Krug — Krug’s puck moving prowess and ability to push the tempo is well documented. Still, he’s trying to find his niche in his own end, and the Bruins will need that to improve next season.

Krug (39 points in 78 games on 12 goals and 27 assists in 2014-15) has made some nice steps in his defensive game in the last few seasons. He is not going to be a top pair defenseman in this league due to his size, but he can still be productive in his own end. The question is, can he move up from his role as a bottom-three defenseman and jump into the second defensive pairing next season?

Given the lack of depth on the blue-line, Krug may see more minutes next season barring any significant upgrade this summer. — Tim Rosenthal

Adam McQuaid — When the Bruins jettisoned Boychuk to the Islanders in the days before the season opener, all eyes turned to the fifth-year 6-foot-5 defenseman to fill a chunk of that void. Last year McQuaid played 30 games with six points and a plus-12. In 63 games this year, he tallied seven points on a goal and six assists while playing about 20 minutes a night.

For McQuaid, it could have been a tale of two seasons after missing Nov. 18 through Jan. 3 with an injury. In 20 games before Nov. 18, he had just two points. After January 3, he played 43 games with four assists and a minus-5.

Zach Trotman — He may have only played in 27 games, but Trotman kept it simple on an injury-ridden blue line. On April 2nd, the 24-year-old scored the game-winning goal against the Detroit Red Wings at a crucial point in the season while the B’s were fighting for their playoff lives.

The defense is a serious question for Boston especially with Chara getting up there in age, but Trotman has showed he can fit the system. The seventh round pick wasn’t outstanding, but he wasn’t terrible either. He will have a chance to make the team out of camp next season. — Chris Chirichiello

Like Hamilton, Miller missed a significant amount of time late in the season due to a shoulder injury. In his absence, a rotating trio of Bartkowski, McQuaid and Zach Trotman tried to step in to fill Miller’s role along with Krug on the third defensive pair.

Miller’s role as a stay at home defender who can deliver some crushing hits is a good one for the former University of Vermont product. With one year left on his current contract, he may only have one more chance to try to prove himself in Boston. — Tim Rosenthal

Tuukka Rask — For a player who appeared in 70 games, Rask did everything in his power to keep the Bruins in the playoff hunt. The 28-year-old finished the year with a 34-21-13 record, a .922 save percentage and a 2.30 goals against average.

It may not have been a Vezina-type season for Rask, but with suspect goaltending behind him, the Finnish netminder played at a very high level despite the lack of rest.

Sure, in the team’s most important three games of the season against the Capitals, Panthers and Lightning, Rask went 0-2-1 allowing nine goals in that span, but he is not to blame for their early summer. If there is one other player Boston must hold on to other than Bergeron if things go south, it’s their goaltender. — Chris Chirichiello

Niklas Svedberg — Not much to be said — good or bad — about Niklas Svedberg this year. Though he only started 14 games this season, Svedberg was a solid backup to Rask, posting a 2.33 goals against average and a .918 save percentage and picking up two shutouts along the way.

With the Bruins still in the process of preparing Malcolm Subban for the NHL, Svedberg makes a good No. 2 behind Rask and is an asset that the coaching staff should start using — no sense in paying him to sit on the bench. — Adam Bunnell

On Bruins Daily: Former Bruins leave their mark in Round 1 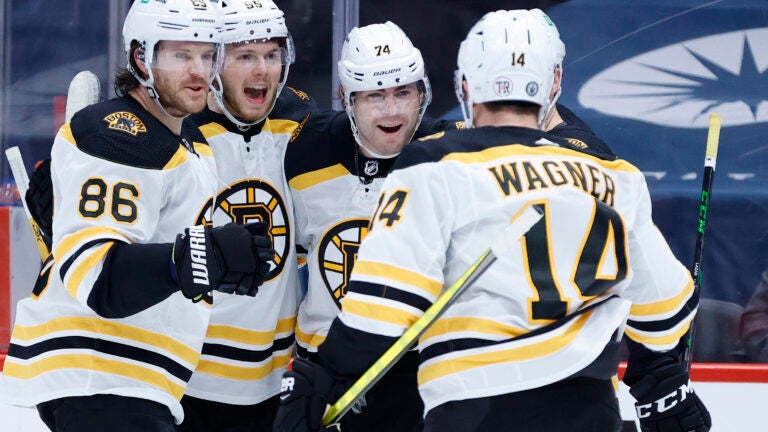