An old story got older for the Celtics tonight.

The Celtics stick with teams until halftime, allow their opponents to make third-quarter runs, keep things close until the end, and ultimately lose the game.

It happened again tonight, as Boston could not hold a fourth-quarter lead and fell to the Sacramento Kings, 96-91. It was the sixth straight loss for the Celtics.

It’s not a matter of personnel. The Celtics followed this pattern when Paul Pierce and Wally Szczerbiak were on the floor. They follow it against the league’s best and the league’s worst. Tonight’s loss to Sacramento is nothing new.

The Celtics got to within 91-89 on a Ryan Gomes three-point play with 21 seconds left, but Kevin Martin took an outlet pass from Brad Miller and converted a three-point play on the other end to push the lead back to five.

Delonte West led the Celtics with 25 points on 10 for 16 shooting. West also had four rebounds and six assists.

Kevin Martin had 27 points for the Kings while Ron Artest had 19 points and 11 rebounds for Sacramento.

Al Jefferson and West (sans headband) were dominant for the Celtics in the first half. The pair combined to shoot 11-17 from the floor and put the Celtics out front 44-41 at the break.

Despite having West back, Rivers seemed dissatisfied with his choice of personnel in the fourth quarter. With 8:21 left in the fourth. Rajon Rondo held the ball too long and the Celtics drew a shot-clock violation. Celtics coach Doc Rivers stood up and screamed at his rookie point guard.

Rondo looked dejected when he came to the bench, but one of the Celtics coaches told him to stay ready as he sat down. Rondo re-entered the game for the Celtics but was never effective.

We’ll be back with postgame reaction from the locker rooms in a few minutes. 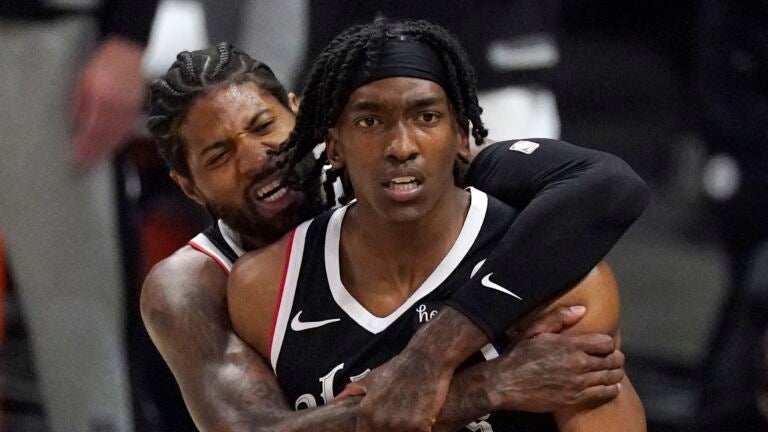