Brian Scalabrine left USC in 2001, but the Celtics forward is still a fan of the college game. With his Tommy Heinsohn bobblehead doll in one hand and his USC foam finger in the other, Scalabrine made his 2007 NCAA tournament picks as part of Boston.com’s Bracket Challenge. The NBA veteran joins Globe columnist Bob Ryan, sports editor Joe Sullivan, and basketball reporters Mark Blaudschun and Michael Vega as Boston.com’s expert prognosticators.

We’ll get right to Scal’s bracket:

In the East, Scalabrine thinks the higher seeds will prevail. Still, the big man picks a couple of upsets. Sorry BC fans, but Scal’s got the Eagles losing to Texas Tech in the first round. He’s also predicting a No. 11 George Washington upset of No. 6 Vanderbilt. And don’t call him a homer, because Scalabrine’s got his USC Trojans falling in the second round to a Kevin Durant-led Texas team.

North Carolina and Georgetown will meet in Scalabrine’s regional final, with Georgetown advancing to the Final Four.

“I like Georgetown a lot and I think their halfcourt game is too much for UNC,” said Scalabrine. “And coach’s [Doc Rivers] son plays there, so I pick Georgetown.”

Scalabrine’s picking against Tennessee in this region, but it’s not because of his intricate knowledge of basketball strategy.

Not many upsets in this region. Scalabrine sees a great Sweet 16 matchup between Memphis and Texas A&M. No. 1 Ohio State should meet No. 2 Memphis in the regional final, and Scalabrine likes Memphis to move on.

You want upsets? Scal’s got a lot of them for you in the Midwest, where he’s predicting No. 13 Davidson to take down No. 4 Maryland in the first round. He’s also got No. 12 Old Dominion over No. 5 Butler, and No. 11 Winthrop over No. 6 Notre Dame.

“I like Old Dominion beating Butler,” said Scalabrine. “I think it will be a challenge for Butler to play with a bull’s-eye on its chest.”

All those upsets won’t lead to much in the later rounds, however, as Scalabrine’s got No. 3 Oregon facing No. 1 Florida in the Elite Eight. Florida moves on.

Sorry Holy Cross. Scal doesn’t like you, either. Southern Illinois will roll through the Crusaders on the way to a Sweet 16 matchup against Kansas, according to the Celtics forward’s bracket.

In the bottom half of the region, Scalabrine thinks No. 11 VCU will upset No. 6 Duke and give Pittsburgh a run for its money before bowing out. UCLA has an easy road to the Elite Eight in Scal’s bracket, setting up a classic matchup with Kansas.

“I’m not a Kansas fan but I don’t see anyone beating them until they play UCLA,” said Scalabrine (Paul Pierce, take note).

According to Scal, UCLA will knock off Florida in a shocker, setting up a championship game with: Jeremiah Rivers’s Georgetown team.

Sorry Doc (and Trojan faithful), but Scal’s got the UCLA Bruins as the 2007 national champions.

Do you think you can do better than Scal? Sign up for our free Bracket Challenge and find out. 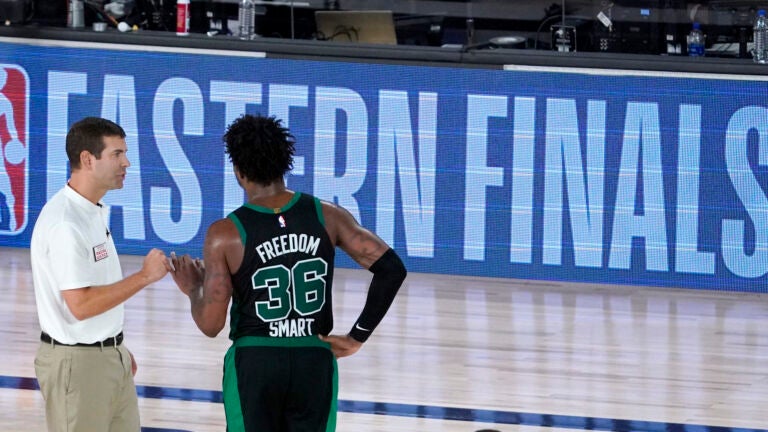 Marcus Smart thanks Danny Ainge for drafting him 7 years ago