This one was fun.

The Celtics and Pistons played playoff basketball here in late December at the TD Banknorth Garden. No matter how much both teams downplayed this one before the game, the intensity showed up on the court and in the crowd.

The Celtics held a seven-point lead at halftime, but Detroit’s defense forced Boston into 29 percent shooting in the third quarter. Detroit shot only 39 percent in the third and allowed the Celtics to maintain a lead heading into the fourth.

The Pistons took the lead, 68-67, on a Lindsey Hunter three-pointer at the 9:40 mark in the fourth. Rip Hamilton converted a dunk off of a steal on the next possession to put the Pistons up three and force Doc Rivers to call a timeout.

Rajon Rondo picked up his fifth personal with 6:54 remaining, and handed the point guard duties to Ray Allen. James Posey took a turn guarding Chauncey Billups. The experiment ultimately failed as Rivers was forced to insert Rondo back into the lineup with five fouls.

Rondo couldn’t do much to stop Billups, who had 10 of his 26 points in the final frame.

The Celtics looked out of it, but an Eddie House three-pointer cut the Detroit led to three with 1:01 remaining in the game. The Celtics got a stop, and Ray Allen knocked in a leaning-three with 18.9 seconds left and forced the Pistons to call a timeout with the game tied at 85.

Billups turned the ball over on Detroit’s next posession, and the Celtics had a chance to win it with 5.1 seconds left. The Celtics inbounded the ball to Pierce, who missed a turnaround that would have given the Celtics the lead.

Detroit advanced the ball with a timeout and had one last chance. Boston played great defense, but Billups drew a foul on Tony Allen with 0.1 seconds left and went to the line. Billups made both free throws to seal the win for the Pistons.

Kevin Garnett led the way for the Celtics with 26 points and 12 rebounds.

We’ll have plenty of reaction from both teams after this amazing game. 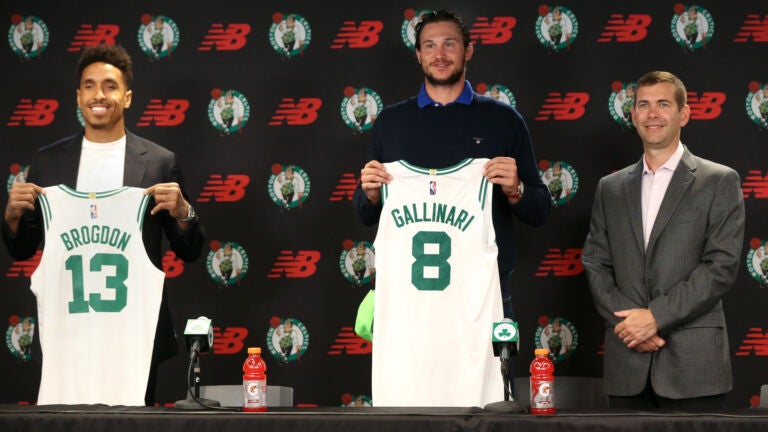 5 takeaways as Malcolm Brogdon, Danilo Gallinari are introduced as Celtics