Davis clinches win (FINAL: Celtics 92, Magic 88)
Dwight Howard made 1 of 2 free throws before Glen Davis grabbed the rebound and got fouled. Davis made both on the other end to preserve the win for Boston.

Timeout (36.2 fourth quarter, Celtics 86-85)
Celtics get a defensive stop. Rajon Rondo misses a three on the other end that hit rim, though the officials called a shot clock violation. Celtics ball.

All the way back (1:20 fourth quarter, Celtics 86-85)
Ray Allen comes around a screen and buries a 3-pointer to give the Celtics their first lead of the second half. A 12-0 run here for the Celtics.

Baby steps (3:56 fourth quarter, Magic 85-79)
Glen Davis’s jumper makes it a 6-point game. Rajon Rondo is back in the game for the final stretch. The Celtics were down 14 five minutes ago and the crowd was lifeless, but this run has the home folks back into it.

Some life (5:55 fourth quarter, Magic 83-74)
The Celtics have gotten the lead back into single digits. Dwight Howard just picked up his fourth foul, but it might be too little too late.

Rajon Rondo left the game with four fouls halfway through the third quarter and still hasn’t returned. Rondo has 6 points, 3 assists, and 3 turnovers.

Not looking good (8:49 fourth quarter, Magic 77-63)
The Celtics have dug themselves even deeper at the start of the fourth quarter. A dunk by Dwight Howard gave the Magic their largest lead of the game and forced Boston to call a timeout.

Doug Flutie is in the house, but he’s unavailable to help the Celtics orchestrate any late drives here.

Much work to do (END third quarter, Magic 67-59)
Glen Davis has joined Paul Pierce in double figures, but the offense still hasn’t produced nearly enough for the Celtics in the first three quarters. The Celtics are shooting just 36 percent. Eddie House drained a 3-pointer just after the buzzer, a shot the Celtics surely could have used.

On the other side, Rafer Alston (17 points, 5 rebounds, 5 assists) is pacing the Magic. One quarter left for Boston to turn things around.

Still a deficit (2:08 third quarter, Magic 59-50)
The Celtics haven’t been able to cut into Orlando’s lead at all. You wonder how long Boston can go without putting Rajon Rondo back out there with those four fouls.

Rondo to the bench (6:20 third quarter, Magic 55-46)
Rajon Rondo picked up his fourth personal foul trying to take the ball to the rack over Marcin Gortat.

Second on Howard (9:27 third quarter, Magic 50-43)
Paul Pierce just drove and picked up the second personal foul on Dwight Howard. He did the same thing in the first half, but the Celtics aren’t attacking Howard nearly enough. (UPDATE: Howard picked up his third foul seconds later for swatting away Rajon Rondo).

Halftime (END second quarter, Magic 45-37)
The Celtics shot 36 percent from the field and scored just 37 points in a dismal first half on the offensive end. Paul Pierce (10 points) is the lone Celtic in double figures.

Timeout (2:30 second quarter, Magic 40-33)
Because of the magic of television, we’ve got another timeout here. Not much has changed since the last timeout. Rashard Lewis (12 points) continues to go to work down low for Orlando.

A little run (5:27 second quarter, Magic 33-28)
A three by Brian Scalabrine and a layup by Eddie House has cut the lead in half just like that.

Hole getting bigger (6:40 second quarter, Magic 33-23)
The home fans are getting a little restless as the Celtics continue to dig themselves a hole in the first half.

Timeout (8:46 second quarter, Magic 28-23)
It would be too much to say the Celtics have caught fire, but they’re at least making shots now, threes by Eddie House and Brian Scalabrine the biggest. The Magic, however, are shooting 50 percent from the floor, a stat that needs to change for Boston to get the lead back.

Two on Perk (11:40 second quarter, Magic 22-16)
Kendrick Perkins just picked up his second foul trying to muscle Dwight Howard out of the paint.

Nothing going in (END first quarter, Magic 22-16)
The Celtics need to shoot better than 27 percent if they have any chance of winning this game. Six made field goals in 22 attempts does not a winning team make.

Lewis heating up (1:51 first quarter, Magic 16-14)
Rashard Lewis took Glen Davis to the hole a couple of times, which is something he should be doing much more often. Lewis has 8 points.

Timeout (4:45 first quarter, Magic 10-8)
Dwight Howard hasn’t scored yet, and he’s looked pretty terrible on the offensive end to boot. His attempt at a running hook shot was something Kendrick Perkins would have been ridiculed for a couple of seasons ago.

On another note, Brian Scalabrine just hopped on the stationary bike to get loose.

Poor shooting (6:57 first quarter, Celtics 8-6)
Tough shooting start for both teams, with the Celtics and Magic both at 33 percent.

Timeout (9:23 first quarter, Celtics 6-2)
Glen Davis started the game just like he finished the last one, by draining a jump shot from the corner. Davis has 4 early points, while the Magic have two turnovers.

Just before tip
Huge ovation for Glen Davis, by far the loudest for any Celtic. There’s also a fan wearing a Davis jersey directly in front of me, so blame Big Baby if I miss any of the plays. 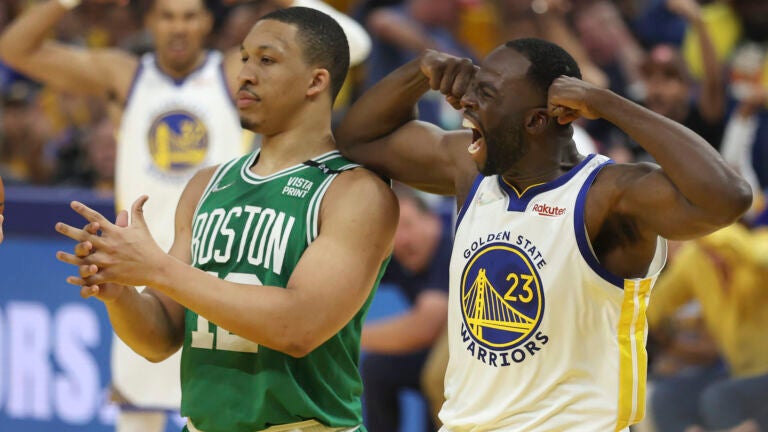