Even though the Celtics are waiting on Kevin Garnett, the key component of their defense, to return from a strained right calf, coach Doc Rivers said their 108-102 loss to the Rockets had nothing to do with Garnett’s absence.

This was about starters not showing up. About a defensive-minded team losing it’s religion. About a championship-driven team forgetting that every game can mean the difference between Game 7 on the road or at home.

It’s not about midseason lulls. Not when they competition’s scorching. Miami and Orlando have both won 9 of their last 10. The Celtics are .500 over the past 10 games.

This was about a team being in cruise control, Doc Rivers said, and thinking they could get away with it.

Instead, a team on a five-game losing streak came in a shot the lights out, getting 24 points from Aaron Brooks and dealing the Celtics just their third home loss.

After letting the Rockets shoot 52.7 percent, Rivers said, “I told our guys I thought overall it was probably our worst defensive effort in three, four years as far as overall effort … That’s a mental mindset and it starts with me. I’ve got to somehow figure out a way of getting them to see the urgency of the whole season and not the single game.

“To me, you can see them thinking about the individual game and not the ramifications of the entire season. Playing Game 7 on the road, not just in the Finals if you make it there, but in the playoffs. In the East, which is going to be difficult. This year’s not like last year where you can coast. You don’t have home court this year, you could go home.”

For the third time in four games the Celtics let an opponent run up 100 points. They’re coming off a game where they let Derrick Rose score 36 points, the second biggest individual scoring night the Celtics have allowed this season behind the 39 that Amare Stoudemire rang up last month at Madison Square Garden.

The Rockets put seven players in double-figures, drilling 10 of 20 3 pointers.

“I don’t like where we’re at right now, because we’re in this cruise control and we think we’re going to show up and win,” Rivers said. “When you’re shorthanded, that’s not going to happen.”

Allen sore after fourth-quarter fall
Ray Allen just took a nasty spill in front of the Celtics bench and early in the fourth quarter and immediately came off the floor at the next dead ball.

He stayed on the bench from the 10:56 mark to the 5:40 mark, and said that even though he couldn’t feel the pain when he was on the floor, after the game his left side was sore.

“I just took a hard hit, and kind of collapsed on the side,” Allen said. “I’m sore, I’ll feel it tomorrow. My shoulder but kind of my side, you got so much adrenaline running that you don’t really feel it, once I got in the back I felt it.”

Doc to drop Davis’ minutes
Glen Davis took a team high 14 shots and also played a team-high 38 minutes, both of which were too high for Rivers’ liking.

Since Garnett went down, Davis’s minutes have spiked, but his performance has been up-and-down.

“He’s getting too many minutes, quite honestly,” Rivers said. “Thirty-eight minutes is too many for Baby. We don’t have a lot of options right now; Luke (Harangody’s) playing okay but we may have to go small. But that’s too many minutes, and that’s on me. Baby shouldn’t play more than in the thirty-range, because I think the fatigue is bothering him.” 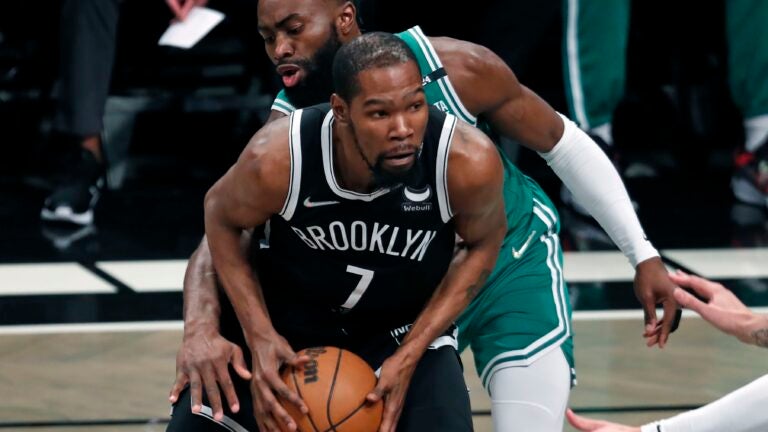