The Celtics have every reason to be confident. A 22-point playoff win and a 3-1 series lead will do that for you. But Sunday’s 101-79 drubbing of the Hawks was both a confidence booster and a reminder that success is fragile at this time of year. In the playoffs, every team lives on the edge.

Paul Pierce was dribbling Sunday morning when he twisted his left knee at Boston’s shootaround. Just walking around, according to Celtics coach Doc Rivers. And in one innocuous moment, Pierce was on the ground.

“Honestly, when he went down, it didn’t look good,” Rivers said after Game 4.

Rivers said he didn’t know if Pierce was playing in Game 4 until about an hour before the game. Under those circumstances, Rivers could not have expected much from his captain. And so it goes without saying that Pierce’s 24 points on 10-of-13 shooting came as a surprise, especially given Pierce’s 35-percent shooting in the first three games of the series.

“He was on fire,” Rivers said simply.

Pierce’s performance was an example that the good, as well as the bad, can be unpredictable.

There was a lot of good in Game 4. The Celtics shot 64 percent from the floor in the first half. Rajon Rondo collected 16 assists with just one turnover (the Hawks had 18 assists and 17 turnovers as a team). Pierce put up his 24 points in just 16 minutes.

Not a lot of bad there, expect that Pierce’s injury leaves some uncertainty. Neither Pierce nor Rivers would commit to Pierce playing in Game 5. Mickael Pietrus (hamstring) and Avery Bradley (shoulder) are also questionable. Pierce tweeted after the game that he thought he’d be OK.

That’s good. But Pierce was the author of a similarly optimistic tweet during the 2010 playoffs. After the Celtics went up, 3-0, on the Orlando Magic, Pierce tweeted, “Anybody got a BROOM?” The Celtics lost the next two games, including a bizarre Game 5 where Kendrick Perkins was ejected and Glen Davis was almost literally knocked out. The image of Davis stumbling in the direction of an official at midcourt is tatooed in the memories of Celtics fans who thought, just as Pierce did, that winning a fourth game was a formality.

No one could have predicted the Celtics losing two of their big men and control of the series in the span of a few minutes, and Pierce had every reason to be confident. The Celtics were the better team. Orlando was reeling, having lost Game 3 by 23 points.

Pierce, Rivers, and the core of this Celtics team were there in Orlando. They were also there in the 2008 playoffs, when the Celtics won the first two games against Atlanta in a series that went seven games. The coach’s message before and after Sunday night’s game was simple: Nothing is certain.

“I’ve known that for 20 whatever years, whatever I’ve been in the league,” said Rivers. “It’s fragile year-to-year. I tell our young guys that every day, how fragile the season is for a team. It doesn’t take much. And it doesn’t have to be injuries. It can be attitude, anything.”

The Celtics seem to be approaching this series with the right attitude. Rondo said after the game that, “We definitely want to finish the series out in Atlanta.” Said Pierce, “You don’t want to give a team any confidence. We’ve got to go down to Atlanta with the right mindset, that you don’t want to bring the series back to Boston. Because anything can happen when you give a team confidence.”

All of that is good. But there’s no planning for injuries. The No. 1 seeded Bulls lost 2011 NBA MVP Derrick Rose to a knee injury in Chicago’s first game of the playoffs. Bulls center Joakim Noah is also injured. Rondo was pulled down by Miami’s Dwyane Wade during last year’s playoffs, dislocating his elbow. Injuries to good players happen regularly.

The Celtics were reminded of that in a big way about an hour before Sunday’s game. Huddled around a flatscreen TV in the locker room, Celtics players collectively gasped when they saw Knicks guard Baron Davis injure his knee against Miami. The injury was a gruesome reminder that on one misstep, a player’s season can be over.

The Celtics appear to have caught a break with Pierce, but they weren’t so lucky in 2009, when Kevin Garnett went down with a leg injury. The Celtics finished 62-20 and made the playoffs despite losing Garnett, but the injury caught up to them in the second round against Orlando.

“We played well when Kevin went down,” said Rivers. “Then we got in the playoffs and realized, Kevin’s down. It’s a difference in the postseason.”

That’s not to say that any Celtics or Hawks are more likely to be injured soon, but those looking ahead to a Celtics-Heat Eastern Conference finals need to slow down a bit. The playoffs are different. That difference is what allows teams like Oklahoma City to sweep, what allows Chicago to cruise through the regular season without their best player but falter in the postseason. It’s what allows the Hawks to play Jason Collins and Erick Dampier a combined 42 minutes in Game 3 and lose in overtime, and what allows Josh Smith and Al Horford to return for Atlanta in Game 4 in a blowout loss. It’s what makes predictions impossible.

The Celtics are in the driver’s seat after Sunday night’s win, but don’t be surprised if the series takes another turn. It wouldn’t be the playoffs without it. 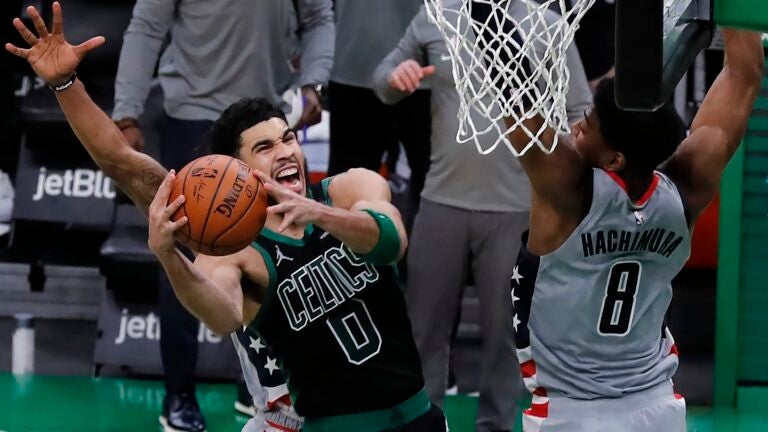