I’m happy to be writing my first post for the Celtics Blog. I’m a staff photographer at the Globe and cover a few games every month. I thought I’d share a point of view that the average viewer doesn’t see – the view from my baseline position on the floor (as well as general shots I take from the floor).

Through the season I may pick a topic, an off-beat moment of a game, or perspectives from certain plays. My first post is about pre-game rituals.

Last season, we were well accustomed to a couple of pre-game rituals. Former Celtic Paul Pierce would shoot a couple of half-court threes during warm ups, point guard Rajon Rondo would grab the rebounds and toss them to teammates, including an alley oop to forward Jeff Green. Former Celtic Ray Allen would dribble the game ball next to the Celtics Dancers. And I must have 100s of pictures of former-Celtic Kevin Garnett’s ceremonial chest-pounding.

This season, after 28 games, here are a couple of rituals I’ve observed:

Lucky running out with the flag. This has happened since I’ve been covering them, but always makes for a fun picture.

Jordan Crawford usually gets really low as he runs through the tunnel of kids to give them high fives.

The pre-game montage changes every few games with new highlights. The players always watch and Jeff Green usually stands to the left of bench basket dribbling a ball.

The moment the National Anthem ends MarShon Brooks and Kris Humphries always try to beat each other to the rim. Whoever gets there first hangs while the other person horses around with him from the ground. I’ve seen variations and I’m not sure if it’s something they did when they were teammates on the Brooklyn Nets.

I’m not sure if I missed this last season. As the players throw off their warm-up suits Jeff Green jumps into Strengh and Conditioning Coach Bryan Doo, they bow to each other, then take a fighting stance.

Here are some more photos from today’s game. 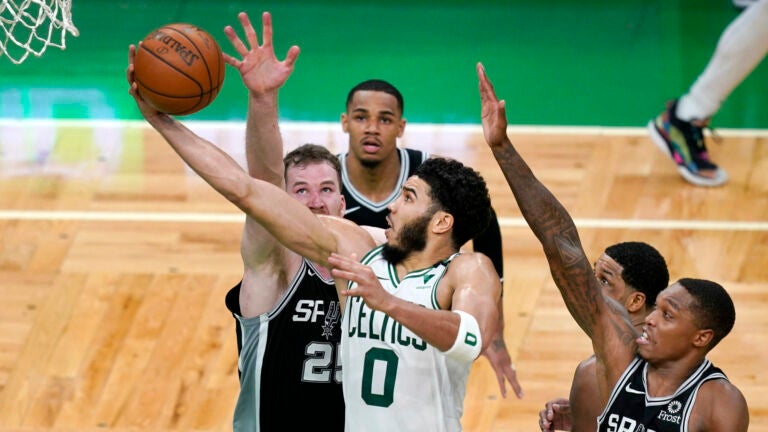