The Boston Celtics lost a draft lottery tiebreaker with the Utah Jazz on Friday afternoon.

Boston’s chances of earning a top-3 pick in the NBA Draft are only slightly diminished with the tiebreaker loss. The Celtics will have a 10.3 percent chance at the top pick and 33.4 percent chance at a top-three pick. Utah will have a 10.4 chance at the top pick and 33.7 chance at a top-three pick, thanks to the win.
Where the tiebreaker loss really hurts for Boston is if the Celtics are not selected for one of the top three picks on draft lottery night. At that point, the remaining teams in the lottery pool draft are arranged via the inverse order of their regular season record.
Since Boston is now officially slotted in the fifth spot for the draft lottery (behind Utah), there is a possibility that they may fall to the eighth overall spot in the draft, if three other teams jump over them in the lottery.
Here are the full odds for the all of the draft slots in which Boston could fall:
1st: 10.3%
2nd: 11.1%
3rd: 12.0%
4th: 0%
5th: 23.7%
6th: 34.2%
7th: 8.2%
8th: 0.3%
If the Celtics had won today’s tiebreaker, they would have been assured of a top-7 pick and would have had an extremely high chance (81 percent) of a top-5 choice. Now those odds drop to 57.1 percent.
It wasn’t all bad news for the Celtics on Friday, though. The Brooklyn Nets won a tiebreaker with the Washington Wizards for the 17th overall spot in the draft. That selection will go to Boston, as part of the compensation for the Kevin Garnett/Paul Pierce blockbuster trade this summer.
The Celtics will head into the NBA Draft on June 26th with at least a top-8 pick and Brooklyn’s 17th overall selection. Closure for Boston’s first pick won’t come until May 20th when the NBA Draft Lottery is held and the complete lottery draft order is finalized. 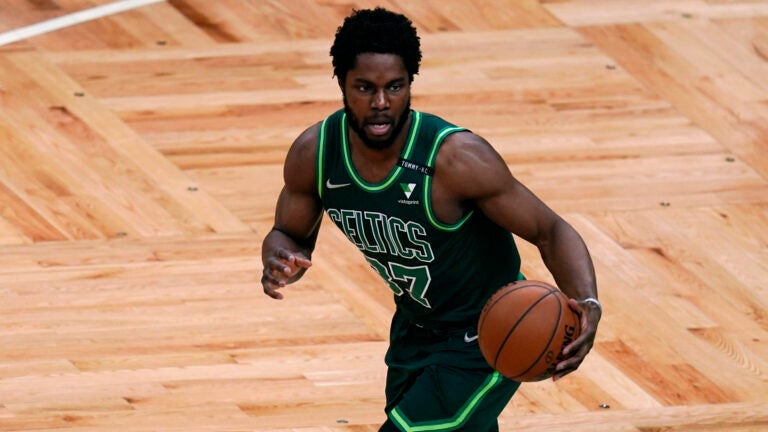