Even with a different makeup, the Celtics are still perfectly capable of blowing double-digit leads at home, as was the case on Friday afternoon against the Brooklyn Nets. Now 10-17 and having lost three straight on the heels of Rajon Rondo’s move to Dallas, the team has entered total rebuild mode, probably only having slowed down for a minute due to the holidays.

There’s a solid chance that Danny Ainge, already active on the trade market, could turn over at least half of the Celts’ current roster between now and February 19, NBA trade deadline day. No fewer than eight names are near certainties to be bandied about in trade talks between now and then with some of them already on borrowed time in Boston. What kind of return the Celts can get on any of these guys is anyone’s guess but you can bet that some of them, if not all, are on their way out. Here’s a list of trade candidates in order of least likely to be moved to most likely.

Oh and one more thing: Note that each of the top five names falls somewhere between “pretty much definitely gone” to “mortal lock to be gone” and are for the most part interchangeable on the list.

Gerald Wallace – His name will surely come up but with another eight-figure payday coming next year, don’t expect to see locker room glue guy Wallace going anywhere unless the Celts decide to pay someone to take him off their hands.

Jared Sullinger – Probably won’t happen given his age and rookie contract but imagine Sullinger on a good team with a true big man and enough perimeter shooting to carry it on a given night. Teams pay for guys like that.

Sullinger, who showed signs of breaking out of a brutal slump against the Nets, could bring something valuable back in return. Like several other members of the Celtics’ roster as presently constituted, he’s just miscast. His size is an issue which is why he should be spending every second trying to turn himself into a wide bodied, low-post bull — think Charles Barkley in his prime — instead of a three-point shooter. The Celts should consider looking to deal him no later than this summer unless Ainge can upgrade the center position and acquire the kind of outside shooting that would allow him to better develop as a traditional 4.

Evan Turner – From No. 2 overall pick (Philly) to possible missing piece for title contender (Indiana) to barely mid-level bench guy for a team going nowhere (Boston) in what felt like five minutes, Turner still looks like he could possibly be a reasonably attractive trade piece.

This is a guy who can bring a presence on offense and he’s making less than $7 million over two years. Turner is the closest thing the Celtics have to a go-to guy (yes, it’s true) who can both create his own shot and actually wants to. The fact that the Celts brought him in on such short time and money wasn’t solely due to his market shriveling up after he stumbled his way through last season’s stint with the Pacers, it also had to do with the fact that he’s nowhere near their long term plans. So given all that as well as the fact that he’s having a pretty decent season in which he’s proven that he can conceivably play three positions, there could be an offer or two out there for him that the C’s deem worthwhile (Clippers? Atlanta? Washington? Chicago?).

Brandan Wright – If you believe some of the rumors swirling about at the moment, Wright could be gone by New Year’s. Cleveland, which already needed big man depth when Anderson Varejao predictably went down, is trying to get the Celts to help them out again, just as they did in the summer when they used the Tyler Zeller deal to create more room to fit LeBron James back into the fold (and while we’re here, how badly do you think the Cavs wish they still had Zeller right now?).

Wright feels like he could look good in Boston long term given his strengths around the basket on both ends. But just like it did when he was in Dallas, his expiring contract makes him an attractive chip for a potential deal and he fits comfortably into Cleveland’s $5.2 million trade exception. He’s almost certainly a goner.

Jeff Green – The most logical trade candidate now that Rondo is gone, the Celts should move on from Green as soon as they can given the now full-on commitment to a long rebuild.

Green is owed another $9.4 million next year which diminishes his value slightly, but he could be an ideal fit for a playoff team that needs an athletic small forward (Clippers?) given that he’d be going to a situation in which the pecking order would already be established. If we know anything about Green it’s that he’s not interested in being or wired to be THE MAN so there’s little doubt he’d welcome the chance to quietly post somewhere around 12-14 points and four or five rebounds while others do the heavy lifting.

Green went into somewhat of a funk when Rondo was dealt, working his way out of it to a point against Brooklyn. But he has to know his days in Boston are numbered. Bringing in a guy as talented and capable as Green as a third or fourth option has to be appealing to a number of contenders, even with his contract for 2015-2016 attached. Don’t be surprised to see him go within the next couple weeks.

Marcus Thornton – Thornton makes too much money ($8.57 million) but he’s in the final year of his deal and as we’ve seen from him a handful of times this season, he’s got some serious Microwave vibes. It’s unclear if the Celts could get anything for him beyond more foundation for the draft pick skyscraper they’re building, but what is clear is that there will be a market for him thanks to his heat check capability (Portland? Memphis? Toronto?). Don’t get too much more attached to him than you already might be — he will be long gone by the deadline.

Jameer Nelson – The second most likely Celtic to go between now and the deadline, Nelson has shown in just three games that he’s exactly what a contender in need of point guard depth needs (Houston?). He’s not a starter anymore, which the Mavericks had to have figured out within their first 10 games of the season. But he can still manage an offense, get guys the ball in the right place, spot up for the occasional jumper and bring the experience of a guy who started in the Finals once as well as played for some terrific coaches. Nelson is the quintessential backup point guard at this stage of his career and the Celts should have plenty of options when it comes time to send him along.

Brandon Bass – The easiest one of them all. Bass is the perfect pickup for a contender seeking offense and toughness off the bench for 15-20 minutes per night at an affordable price (Memphis? Washington? Cleveland?).

Bass, absolutely heisted from Orlando in exchange for Big Baby and Von Wafer a few years ago, is the last link to when things were really special for the Celts (his first year in Boston was the lockout shortened 2011-2012 season when Green was recovering from his heart surgery, Ray Allen was in his final season as a Celtic and the team took the eventual champion Heat to seven games in that incredible Eastern finals series). He proved to be a perfect fit on that team thanks to his particular skill set but on a team in transition like the current incarnation of the Celts, he just gets kind of lost which has played itself out in the form of five minutes played or fewer in two of the team’s last three games.

Bass makes $6.9 million this season, the final one on his contract. It probably won’t be long before teams in the hunt in need of one final bench piece are beating on the Celtics’ door. It will be nice to see a good, hard working guy like Bass get a chance to win.

Not sure what’s going to happen to Brandon Bass, but dude should get standing O when he comes back to Boston with next team. He plays hard 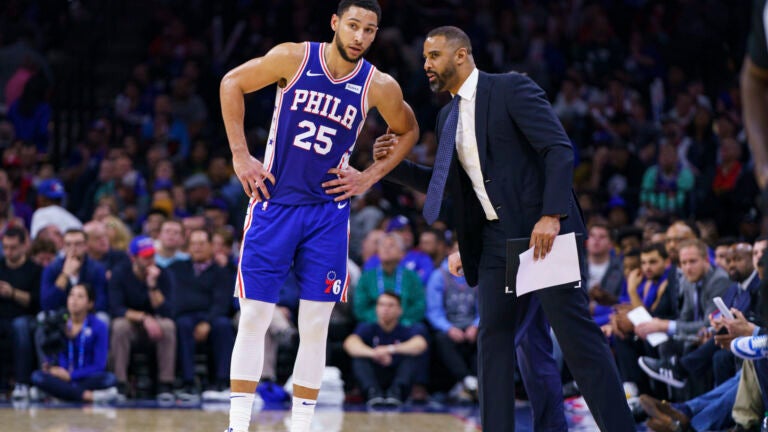