There’s defense and there’s NBA playoff defense, and the Celtics came into Thursday night’s Game 3 of their first round series against the Cleveland Cavaliers at TD Garden ready to play physically and with an edge. For long stretches of the evening the Celtics put on a very solid display of the kind of D that takes you places come the postseason.

But the Cavs just so happen to have the best player on the planet in LeBron James, and no matter what the Celts threw at him — which was plenty — and how they did it, they couldn’t slow him down in a 103-95 loss that put them on the edge of elimination in this best-of-seven series.

Eight, count ’em, eight different Celtics spent at least two possessions trying to stay with LeBron, not including switches. Jae Crowder, Evan Turner and Brandon Bass were his primary foils, while Jonas Jerebko took a few runs at him too, no doubt because of the kind of range the wiry Swede can throw around. Avery Bradley, Marcus Smart, and Isaiah Thomas, and Luigi Datome also took turns.

None of it worked particularly well. LeBron finished with 31 points on 13-of-26 shooting and while that line included a couple of missed layups in the first half it also featured a handful of vintage bombs from the perimeter when whoever had him — be it Crowder, who probably did the best all-around job of anyone, or even Marcus Smart, who was able to body him up despite a five-inch height difference — was right in his grill.

“You just have to try to make it physical with him,” Crowder said afterward. “He’s a physical player so you have to do what you can to make him work.”

Crowder declined to elaborate any further, citing a concern about giving away any secrets (“I can’t tell you anything about strategy, you know he reads this stuff,” Crowder said with a smile) but his message was abundantly clear.

LeBron’s contested field goal percentage — his shooting percentage with a defender within three-and-a-half feet of him — was 61.5 as per NBA.com, just another bit of evidence proving that even when you do what Crowder stressed as so important, it probably won’t matter.

Before the game, Celtics coach Brad Stevens said that in every game, “you want to get back, challenge shots and rebound. The key is to keep all five guys matched up but that’s tougher to do when you have to commit more to great players.” The Cavs have three such players on their roster but none require the kind of attention LeBron does, even the Kyrie Irving of Games 1 and 2.

It’s not an easy task, even when LeBron doesn’t have All-Stars like Irving and Kevin Love (23 points, 6-of-10 from 3-point range including a couple of absolute killers) and other shooters like J.R. Smith surrounding him. Forget about doubling as anything more than an occasional tweak with a supporting cast like that.

All you can do is keep throwing all you can at LeBron and hope that the physicality Crowder spoke of will have some kind of positive effect. That, and play him without even a trace of fear, which is something the Celts will never have to worry about when it comes to Crowder.

“Jae’s not scared,” said Stevens, pointing out why Crowder is his top choice to try to run with LeBron without needing to say it out loud. “He’s not going to play in a way that he’s going to back down from anybody.”

If only Crowder’s kind of fearlessness was all it took. 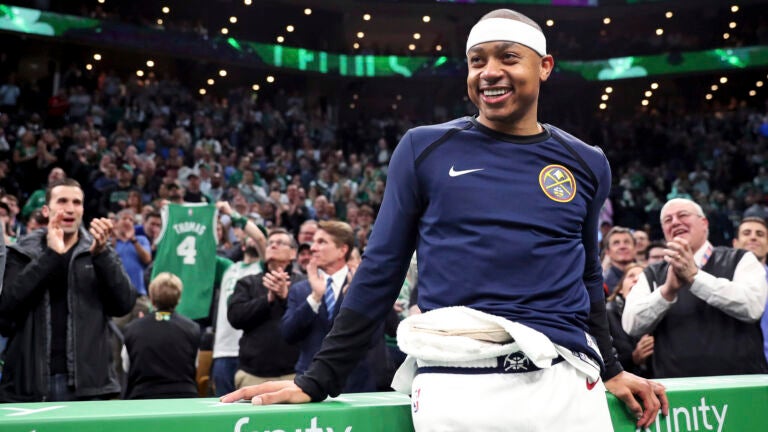