Thanksgiving high school football games are among the most special sports traditions in Massachusetts, bonding communities and building memories that only grow more precious as the years pass.

For more than 30 years, Channel 5′s Thanksgiving football special, hosted by Mike Lynch, was a welcome part of that tradition, the dessert after the satisfying meal.

The program, titled “High 5 Salute to Thanksgiving Heroes,” aired for 30 minutes early in the evening, showing highlights, scores, and scenes from as many games as possible.

It was a massive undertaking but a true labor of love for Lynch, a legendary athlete at Swampscott High who, during his run as sports anchor at Channel 5 that began in 1982, went above and beyond to give high school sports their due.

But this year, that tradition ends. WCVB management has decided there will be no show.

“I’m disappointed, not so much for myself but for the whole product, and for the kids who missed out last year [when the games were canceled because of the COVID-19 pandemic] on playing and getting some of the exposure they deserved,” Lynch said.

Lynch, who retired from his full-time role at Channel 5 in August 2019 but remained a special correspondent contributing to big-event coverage, had hosted and sorted out the logistics of coverage since the show’s debut in the late ‘80s. There were no games and thus no show last year, but he began preparing for its return weeks ago, prioritizing which games to cover while assuming it would be back.

In late October, he called news director Margaret Cronan to check in on plans. Lynch was told the station was going “in a different direction,” with highlights instead integrated into the newscast.

When Lynch asked if he would be involved in covering a game, he was told the station was going with current staff.

“And that was it,” he said. “I’m sure there’s a good reason why they don’t want to do it. But it’s more than a football show. It was about people, and the community.”

That was evident in how inclusive “Salute to Thanksgiving Heroes” was. Football was at its core, of course. But the heroes weren’t just players. They were cheerleaders, band members . . . anyone with an interesting story. For many of them, in more than 260 schools around the state, it would be the last high school football game they would be a part of.

Lynch and the show made a point to capture all the pomp and circumstance, but the focus was on the warm sentiments and dedicated people at the heart of it all.

During the show, Lynch would change his sweatshirt at each of the four commercial breaks to commemorate a school or person worthy of a salute. “We always had a reason,” he said. “So-and-so was a math teacher for 40 years, he’s retiring, or the school’s cheerleaders won the state championship, or something like that. It was an all-inclusive, town-wide, city-wide show.

“I went to the Swampscott-Dover-Sherborn game last Saturday, and I can’t tell you how many people said something like, ‘We’ll see you Thanksgiving night, can’t wait, that’s must-see TV.’ And I said, ‘Well, the station’s not doing it.’ And the look of dismay on their faces was palpable. I can think of the last two guys I told, they just had their mouths open, agape.”

The logistics of getting information from so many games and organizing all in time to produce a show in the 7 p.m. hour is almost unfathomable. It got easier in recent years to access highlights from games that Channel 5 wasn’t staffing because of smartphone technology and social media. But before that . . .

“It was hectic and then some,” said Lynch. “We would send 8 to 10 photographers out to shoot games. And then we have another 8 to 10 [games airing on local cable] and the cable companies would leave the tapes at the police department or the fire department because they were the only businesses that were open.

“We used to have an intern drive around and pick them up. He’d have to go to North Attleborough, then he would have to swing by Fitchburg, and then up to Lawrence, and he’d come back and come in with all these tapes and game programs.

Lynch chuckled. “Invariably we were always stuck with one score we just couldn’t get,” Lynch said. “One year, my dad [legendary coach Dick Lynch], after he coached Swampscott, he was the athletic director at Danvers. He calls me after the show, he says, ‘Nice show, Mike.’ ”

Cronan, who has been the news director at Channel 5 since July, and station president and general manager Kyle Grimes, who has been in the role since May 2020, did not immediately reply to requests for comment.

Lynch said his wish is that “someone picks up the ball on this,” even if it has to be another station or outlet.

“Just for the sake of everyone involved,” he said. “The kids, the players‚ cheerleaders, the band, the parents, the townspeople. It’s just a feel-good day all the way around. That’s what we tried to convey over the years. It’s not a spectators’ day. It’s a participants’ day.

“Everybody is a participant on that day. The alums come home, all ages, and watch the game. They’ll talk about it during their Thanksgiving meal, and the next day at their annual touch football game. It’s a special day. We always tried our best to commemorate that.” 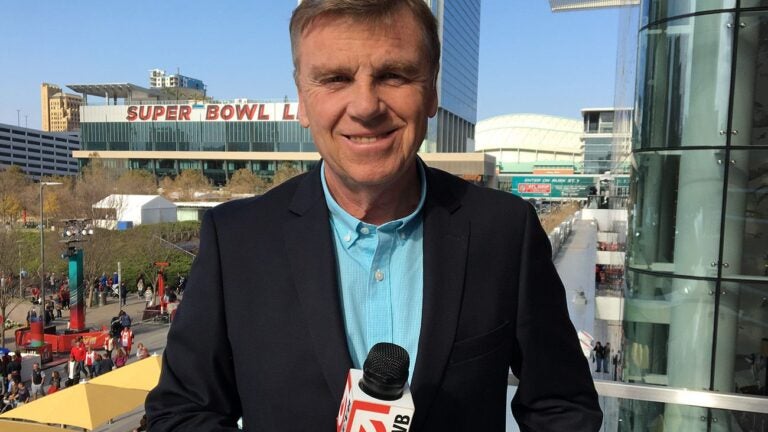