Welcome to Season 10, Episode 18 of the Unconventional Preview, a serious yet lighthearted, nostalgia-tinted look at the Patriots’ weekly matchup.

And so we have the rubber match, the winner-takes-it-all, loser-takes-the-fall third meeting between the AFC East champion Bills and the Patriots, who enter the playoffs as a wild card for the first time since the 1998 season.

The Patriots won the first matchup, a masterful 14-10 victory in Week 13 at Buffalo in which they ran the ball 46 times on 49 offensive plays in a windstorm. The Bills gained their measure of sweet revenge three weeks later, winning, 33-21, in Foxborough behind a tour de force performance from quarterback Josh Allen.

The teams are familiar with each other, and the mutual contempt bred long ago. The specific matchups are of course familiar too: Patriots cornerback J.C. Jackson against Bills receiver Stefon Diggs; Allen against everything BIll Belichick and the Patriots’ No. 2- ranked defense (17.8 points per game) can throw at him; Mac Jones against the double barriers of the Bills’ No. 1-ranked defense (17 points per game) and the proverbial rookie wall.

The Patriots have had an assortment of recurring issues in their 1-3 close to the season, which included losses to the Colts, Bills, and Dolphins. They had at least a puncher’s chance to win all three of those games late, but in each loss the defense couldn’t get a necessary stop.

There also have been all-too-familiar self-inflicted mistakes, including the inexcusable infractions of essentially lining up in the wrong spot by Christian Barmore (encroachment on fourth and 7 against the Bills) and Lawrence Guy (illegal formation on a punt against the Dolphins). We’ve been saying it off and on all season, and we still have to say it as the playoffs begin: The Patriots need to clean up the undisciplined stuff if they’re going to have any chance of sticking around the postseason beyond the first weekend.

Those are the most important issues. The most discussed issue, if perhaps slightly less important given that the Patriots have already beaten the Bills in a game in which he threw for 19 yards, is Jones.

On the whole, he’s had an incredibly encouraging rookie season. If, back in August when Jones was battling scatter-armed Cam Newton for the starting job, someone had told you that the Patriots would make the playoffs and he would throw for 3,801 yards, 22 touchdowns against 13 interceptions, and complete 67.6 percent of his passes, most Patriots fans would have been ecstatic.

And they still should be. The quarterback of the present has a bright future. But what would have surprised us if we’d had a functioning crystal ball back in August is the shape his season took. The reasonable assumption would have been that he’d improved incrementally from Week 1 to Week 18.

But the reality is that his last month was the roughest, and his worst game as a pro came in that second matchup with the Bills, when he went just 14 for 32 for 145 yards and a pair of interceptions.

On the whole, he has had an excellent rookie year. But if the Patriots are to win Saturday night, he’s going to have to reverse his recent trend.

Damien Harris: There’s a tendency, I think, to recall the Patriots’ ability to run the ball against the Bills this season as a single-game achievement. When you win a game, as the Patriots did in Week 13, by running 46 times for 222 yards, it’s natural that such a dominant performance would become a dominant memory.

But the reality is that the Patriots were able to run the ball awfully close to at will in the loss to the Bills as well, with Harris providing the best performance of his career. With running mate Rhamondre Stevenson sidelined, Harris rushed for 118 of the Patriots’ 149 yards in the most recent meeting. He scored all three Patriots touchdowns.

Harris gained 111 yards on just 10 carries in the first meeting, including a 64-yard touchdown run to open the scoring, before Stevenson (78 crucial yards) took on the brunt of the work down the stretch after Harris tweaked his hamstring.

Matt Judon: Don’t you dare compare his recent performances to the last big-ticket free agent Belichick plucked from the Ravens defense. Don’t do it. Don’t even mention Adalius Thomas, you hear me?

After the way Judon played for the first two-thirds of the season — through Week 13, he accumulated 12.5 sacks, 25 quarterback hits, and looked like a genuine Defensive Player of the Year candidate — he deserves the benefit of the doubt. (Since you mentioned it — that’s right, you — Thomas had 14.5 sacks and 25 quarterback hits in his entire three-year Patriots career).

That version of Judon — the one who looked like he might threaten Andre Tippett’s franchise record for sacks (18.5, 1984) — has been missing in action for a month now. Almost unbelievably, Judon does not have a sack or a quarterback hit in the past four games.

And in what sometimes looks like his desperation to get to the quarterback, he has been shirking his edge-containment responsibilities against the run. He was out of position on Duke Johnson’s 27-yard run late in the loss to the Dolphins, as well as quarterback Tua Tagovailoa’s victory-clinching scramble for a first down.

Come back, pre-bye week Matt Judon. The Patriots miss you.

Cole Beasley: It should be a significant concern for the Patriots that Allen picked apart their pass defense in the second matchup without Beasley, who along with fellow receiver Gabriel Davis missed the game while in COVID-19 protocol.

Beasley is perhaps the most reliable slot receiver in the league, finishing this season with 82 receptions for the second straight year. In his absence in Week 13, little-known Isaiah McKenzie suddenly turned into 2007 Wes Welker, catching 11 passes for 125 yards.

McKenzie’s role will be greatly reduced with Beasley back; he has just two catches for 15 yards since his star turn. But Allen has more trusted receivers this week than he did the last time he shredded the Patriots.

Grievance of the Week

Special teams coach Cam Achord has been getting too much television face time this season, and that face is usually looking somewhere between befuddled and angry after his unit’s latest mistake. I wouldn’t go so far as to suggest that Belichick bring back deposed and apparently despised Giants coach Joe Judge as some sort of de facto special teams coach this week. But it’s well past time for this group (and its now-familiar coach) to live up to the Do Your Job mantra.

Allen was just OK statistically in the Week 13 meeting, completing 15 of 30 passes for 145 yards and a touchdown in the whipping winds, and running for another 39 yards. In the second meeting … well, he looked like the most well-rounded quarterback in the league, and perhaps the most well-prepared as well.

Allen took what the Patriots defense gave him early, and then he simply took whatever he wanted later on, finishing with 30 completions in 47 attempts for 314 yards and 3 touchdowns. He resisted the Patriots’ bait and didn’t try to make risky downfield throws, instead making the right play time after time.

His improvement since coming into the league — heck, since his final season at Wyoming, when he completed just 56.3 percent of his passes — is staggering.

The Bills offense was so precise in the second meeting that punter Matt Haack got the day off. Allen led the Bills to points on six of their first seven possessions, and they should have scored on the other one. (Emmanuel Sanders dropped a fourth-down pass in the end zone.) Allen turned McKenzie into a star for a day — he had seven catches on the season entering the game — and connected with Diggs seven times for 85 yards and a touchdown.

As if his laser arm doesn’t present enough problems, Allen also makes dynamic plays with his legs. He finished the season with a team-leading 763 rushing yards and 6 touchdowns. He iced the win over the Patriots with a fourth-and-1 conversion in which he juked away from Jamie Collins and gained 8 yards.

And the Patriots may be shorthanded in the defensive backfield. Cornerback Jalen Mills (COVID-19 protocol) and safety Kyle Dugger (hand), who would be essential in preventing Allen from improvising successful running plays, were both uncertain to play as of late in the week.

Prediction, or here’s hoping no one take’s Bart Scott’s advice …

Belichick said a couple of times this week that the Patriots have to play their best game of the season Saturday. It’s a fairly obvious statement given the opponent and the stakes, but it leads to a question that, when answered, will go a long way to determining how we ultimately view this edition of the Patriots:

Can they play their best game?

Are they capable of that right now?

The trends are not in their favor. But we do know at least two things that must go their way for them to win:

· They have to win the turnover battle. The Patriots are 8-0 when they force more turnovers than they commit. But Jones has five interceptions and two fumbles (one lost) in the aforementioned three losses. The offense must protect the ball better than it has over the sloppy last month of the regular season. And they absolutely must take advantage of the one or two off-target throws Allen will make. Gotta catch those potential interceptions, J.C. Jackson.

So … can the Patriots do everything necessary to win Round 3? I believe Belichick genuinely likes his team. But the Bills are healthier, have the better quarterback, and are playing at home. It’s hard to believe that the flaws that have plagued the Patriots over the final four games will magically disappear on Saturday. Bills 22, Patriots 16. 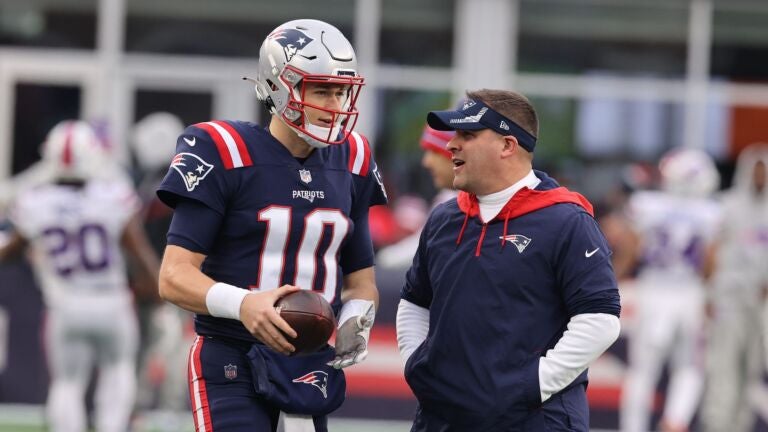