BOSTON (AP) — Up from the Northeastern students rose a chant of ‘‘1988’’ — a milestone they won’t have to hear about any more.

Behind the bench, a fan held up a sign saying, ‘‘Now I can graduate in peace.’’

It’s been 30 years since the Huskies last claimed Boston’s college hockey bragging rights. And with a 5-2 victory over longtime nemesis Boston University in the 66th Beanpot final on Monday night, they were ready to celebrate.

‘‘The curse is broken,’’ said Northeastern coach Jim Madigan, who was an assistant coach on Huskies’ last Beanpot championship team and won twice as a player.

That moment when you win a #Beanpot championship. @GoNUmhockey #GoNU pic.twitter.com/D8PViFFVOK

‘‘We haven’t won a tournament in 30 years, and people keep asking you. … It starts playing on you mentally,’’ he said. ‘‘These young men just stayed focused, blocked out the noise the best they can. I’m just elated for our institution.’’

Adam Gaudette had a hat trick in the championship game, earning the most outstanding player honors. Freshman Cayden Primeau stopped 38 shots for the Huskies to claim the Eberly Award as the top goalie.

Nolan Stevens and Trevor Owens also scored for Northeastern, which had lost nine times in the tournament finals since last claiming the trophy. BU had won 16 times since then — and 30 times in all — beating the Huskies in the final six straight times before this year.

Held annually on the first two Mondays of February, the tournament pits the area’s four college hockey powers against each other. Harvard, the defending champion, beat Boston College 5-4 in overtime in the consolation game.

It was Northeastern’s fifth Beanpot title — by far the fewest of the four schools.

‘‘I’ve been coming to these games ever since I was young,’’ said Gaudette, a native of suburban Braintree. ‘‘When I realized I had an opportunity to play college hockey, I wanted to play for a Beanpot school. I wouldn’t take no for an answer.’’

No. 12 Northeastern entered the game as the highest-ranked school of the four, and had beaten BU twice in the regular season, 4-1 and 6-1. The Huskies fans seemed to sense that their slump was nearing an end.

Outshouting and outsinging their red-clad BU counterparts, the Northeastern cheering section taunted the Terriers fans with call-and-response chants like ‘‘Real Dog, Fake Dog!’’ and the devastatingly biting ‘‘Experiential Learning!’’ (Northeastern takes pride in its co-op program that places students in the workplace.)

But the real celebration came after the buzzer, when Northeastern’s players poured over the boards and threw their equipment into the air. In the stands, the band played the school’s fight song and, for some reason, ‘‘Stacy’s Mom,’’ while fans danced and sang along.

‘‘We haven’t won it in so long,’’ Stevens said. ‘‘We’ve watched so many other teams win it. I’ve seen a lot of classes come through the school and not have a chance to do it. Those guys built a foundation for us.’’

Jake Oettinger made 22 saves for the Terriers, and Logan Cockerill was credited with BU’s only goal, which was actually tipped into the Northeastern net by Primeau 12:35 into the first period.

Then the Huskies took over.

Stevens tied it on a power play when he stickhandled around one defender and back into the middle before beating Oettinger. Gaudette’s power play goal made it 2-1 with 2:28 left in the first.

‘‘I thought we were doing a good job, we had some more chances, and then we take two penalties,’’ BU coach David Quinn said. ‘‘That’s shooting yourself in the foot. If you’re going to win games of this magnitude, you can’t implode like that. You can’t take penalties like that.’’

Owens made it 3-1 on a wrist shot from the left circle with 5:28 left in second, and Gaudette made it 4-1 on another power play, converting a cross-ice pass from Dylan Sikura with 3.5 seconds left in the second. BU pulled the goalie with more than four minutes left and managed to cut the deficit to 4-2 with 2:40 left.

But Gaudette added an empty-netter with 31 seconds left, racing down the ice, swiping the puck from BU defenseman Chad Krys and knocking it in from a tight angle to clinch it.

A fifth-round pick of the Vancouver Canucks and the leading scorer in college hockey, Gaudette had been in consideration for the U.S. Olympic team but did not make the roster like Beanpot rivals Ryan Donato of Harvard and Jordan Greenway of BU.

‘‘I’d rather win a Beanpot, to be honest. The Beanpot’s way more special to me than being on an Olympic team,’’ Gaudette said. ‘‘It’s just something I dreamed of ever since I was a little kid. Picture-perfect night. I couldn’t ask for anything more.’’ 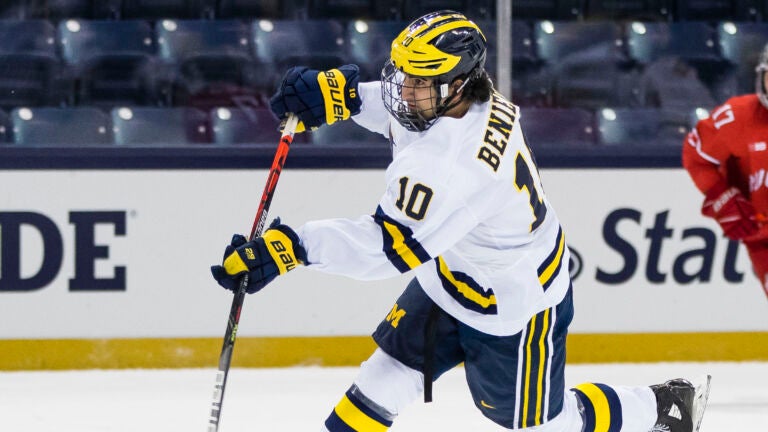