While Harvard-Yale is a football event almost as old as the sport itself, a slightly younger tradition has attracted almost as much — if not the most — attention in recent decades.

MIT, not to be outdone by its collegiate counterparts, has staged several notable pranks of the annual game over the years.

According to an MIT alumnus, the first attempt at a prank of The Game came in 1948. However, as the Associated Press noted in a Nov., 1948 article, the plot failed.

“Police said the students planted wires underground and then planned to set off a detonating fuse during the game,” according to the AP story. “The explosion would have initialed the field with 15-foot-square letters ‘MIT.'”

Stadium workers discovered the wire in advance, and a plainclothes policeman apprehended the student who was tasked with setting off the prank (who also attempted to deny his involvement by declaring, “All MIT men carry batteries for emergencies.”) Eight MIT students were suspended, with a ninth being placed on probation.

Yet MIT pranksters persisted to great effect over the years. Here’s a look back at a few of them:

MIT’s signature prank during Harvard-Yale began well in advance of the game, with a continued idea from alumni. After meticulous planning that included a study of Harvard security patterns, pranksters moved a small pump powered by a vacuum cleaner motor onto the field, buried it, and attached it to a deflated weather balloon.

“Eight trips to the field were made between the hours of 1:30 and 5 a.m.,” explained an MIT prankster in a thoroughly covered press conference afterward.

The preparation complete, it wasn’t until mid-game that the machine was turned on, and the balloon began to inflate.

Growing to 6 feet in size — and with “MIT” emblazoned across it — the balloon finally popped, drawing roaring cheers from the astonished crowd.

Another report from UPI listed additional pranks during the game. MIT students dressed as Yale band members trotted onto the field at halftime and spelled out “MIT” lying down. The report noted that a third prank took place during the game when still more MIT students issued cards to unsuspecting Harvard fans which spelled out (unsurprisingly) “MIT.” The fans had been told that the message would be “Beat Yale.”

Instead of a balloon, MIT went with a rocket in 1990. Pranksters planted a 8 ½ foot by 3 ½ foot banner with “MIT” written on it in the sod on one of the field’s goal lines. Propelled by the rocket, which was fired by a battery-powered control connected by wires from an MIT student’s jacket, the banner flew over the goal post.

Boston Globe writer Joe Concannon summed up the afternoon from a Harvard perspective (as the Crimson lost to Yale, 34-19): “Perhaps the best way to explain Harvard’s frustration in yesterday’s 107th game against Yale in Harvard Stadium is to say that the students of MIT made it into the end zone before the Crimson offense.”

A diagram of the mechanism still resides in the MIT Museum.

During a 34-13 Yale win on Nov. 18, 2006, MIT pranksters struck again. Though a simpler, subtler scheme, the message spelled out another chapter in the “hacks” of the Harvard-Yale game.

MIT students snuck into Harvard Stadium ahead of the game and replaced the letters in the usual motto “Ve-ri-tas” with their own interpretation.

When Harvard students looked up at the scoreboard and caught a glance of the school crest, they discovered that it read: “Hu-ge-Ego.” 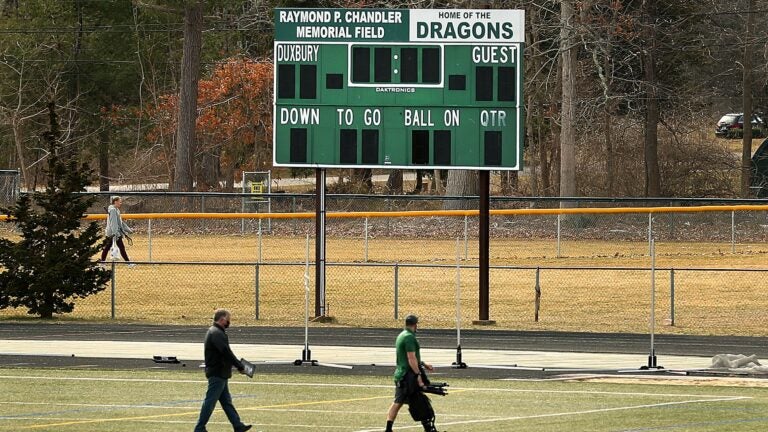