BC, which is also piecing together a strong recruiting class, has a chance to make significant strides next year. Before the new era officially begins, however, the Eagles have one more item of business to tend to.

Boston College (6-6) has a prime opportunity to keep the momentum rolling when it faces No. 21 Cincinnati (10-3) in the Birmingham Bowl on Thursday, Jan. 2 at 3 p.m. The Eagles are seven-point underdogs, and will be without star running back AJ Dillon, but they still have a terrific chance to make a statement in front of a national audience.

“We want to play good teams,” linebacker Max Richardson said, “and we’re glad we got to go against a ranked opponent.”

Here’s what to know as BC wraps up one season and transitions to another.

They’re having a wonderful Christmastime.

In years past, these seniors haven’t been able to head home for Christmas.

Last year’s Cotton Bowl was on Dec. 26, the 2017 New Era Pinstripe Bowl was on Dec. 27, and the 2016 Quick Lane Bowl was also on Dec. 26. While playing right around Christmas Day sparks some excitement in its own way, the players agree going home for Christmas and coming back to play after the new year is ideal.

? Alec Lindstrom and the Eagles are excited to be back on the field in preparation for Cincinnati.#WeAreBC? pic.twitter.com/U6sl8XlwwQ

Interim head coach Rich Gunnell and the staff decided it made sense for the Eagles to work hard before Christmas, head home for the holiday, and come back to Boston after the break for more game prep before flying to Alabama.

Alec Lindstrom, a redshirt sophomore from Dudley, said he plans on taking in teammates who aren’t able to fly home. He said one downside is that it’s easy to get antsy waiting an entire month for one game, yet the extra time to prepare and this added family time are wonderful perks.

“If guys aren’t able to go home, they’ll have somewhere to be for Christmas,” Gunnell said. “They will not be alone.”

David Bailey is ready for an increased role.

David Bailey, in particular, appreciates the extra time to recharge, and he said he feels fresh and confident heading into the bowl game.

Bailey, of course, will assume a significantly larger role with Dillon gone, and that starts against the Bearcats. While Dillon, who departs as one of the best players in program history, received the bulk of the carries this season, Bailey was an integral part of the offense.

? David Bailey, along with Travis Levy and Pat Garwo, is ready to carry the rock into Christmas break.#WeAreBC? pic.twitter.com/m0sKBZQ8Sx

In 12 games, he racked up 140 carries for 816 yards and seven touchdowns. His 5.8 yards per carry are actually higher than Dillon’s 5.3 Granted, that’s in a small sample size, and without the burden of carrying the ball as often as Dillon did, but it’s still encouraging for BC.

While it’s unfair to expect Bailey to provide the same level of production right away, it is fair to expect a lot from him. He’s experienced, physical, and crafty, and his teammates believe he’s poised for a breakout game followed by a breakout season.

“Obviously not having AJ out there is going to be a hit for us, but we’re all really confident in David and his ability,” quarterback Dennis Grosel said. “He’s proven it all year long. He’s ready for this. We have confidence in him. Nothing’s going to change offensively.”

Dillon and Bailey have similar styles, which means the Eagles don’t have to change much at all. Travis Levy and Pat Garwo will both likely get some carries as well. While Grosel may end up throwing the ball a bit more, BC fans shouldn’t expect a sudden spike in pass attempts just because Dillon is gone.

They should expect the same run-heavy, up-tempo offense that has worked well the bulk of the season.

“I’m always ready for anything,” Bailey said. “It’s always the next man up mentality.”

Rich Gunnell is concerned with one thing only.

While this is a terrific opportunity for BC’s players, it’s also a major milestone for Gunnell.

He’s shown no intention of wanting to leave Boston College, but a strong performance from the Eagles could potentially increase his stock and cause a batch of suitors to emerge. It could also help solidify his value here, as Hafley comes and in starts assembling his staff.

Gunnell, who is in his ninth year coaching and fourth as the wide receivers coach at BC, has been thrust into a difficult situation, and he’s handled it with class and poise. It can’t be easy to talk about Steve Addazio, Hafley, and himself, all while preparing for one game that he knows will be his last as a head coach in the short term.

“This is my first time going through something like this,” Gunnell said. “I’d love to stay. I’m a BC guy all the way. It’s a wait and see type thing.”

Interim head coach @BCCoachGunnell met the media Saturday as the Eagles continue prep work for the @Birmingham_Bowl versus Cincinnati.#WeAreBC pic.twitter.com/9BGWbiSPWP

Gunnell has provided a healthy dose of lighthearted fun at practice to accompany the bowl game film study. He’s had punter Grant Carlson and linemen try to catch punts, which provided comedic relief and entertainment for the Eagles.

With the long layoff, Gunnell believes it’s imperative to blend focus with freedom and allow his players to feel comfortable and loose.

“I throw little curveballs in there to have some fun, make it competitive,” Gunnell said.

As the game gets closer, the preparation for Cincinnati ramps us, and Gunnell expects his team to be ready.

“We’re having fun right now,” defensive back Brandon Sebastian said. “We’re happy with what’s going on right now. I guess you could say that, it’s a little bit of a relief. Guys have their head on straight, but also having fun with it. No more going out there and worrying what you did wrong. It’s about getting ready for each game.”

They have business to tend to before next season arrives.

Before Hafley takes over, there is a football game to be played. The names Addazio, Dillon, Hafley, Anthony Brown, and the recruits are all relevant in the grand scheme of BC football, but none of them will play a role this one. That honor will belong to Grosel, Bailey, Richardson, Sebastian, and the rest of the Eagles.

The Bearcats are 10-3, but they’ve lost their last two games, both to Memphis. Three of their last four wins have been by three points or fewer, but all that gets tossed aside in a one-game showdown with several weeks to prepare.

CB @203_brandon speaks about the excitement of having @CoachJeffHafley heading to the Heights. pic.twitter.com/lqS7LKCl5M

On offense, BC will likely try to get Bailey into a rhythm and tire out the Cincinnati defense while mixing in passing plays to keep the Bearcats honest. On defense, the Eagles will have to slow down running back Michael Warren, who has 240 carries for 1,209 yards and 14 touchdowns on the season, and tight end Josiah Deguara, who leads the team with seven receiving touchdowns.

Said Grosel: “As competitors, we’re ready for any challenge, and we’re excited for it.”

Once the bowl game is over, the next chapter begins.

While the Eagles have a lot to play for against Cincinnati, it’s no secret that fans are more excited by the Hafley news.

It was easy to see from his emotional press conference Monday how much the opportunity means to Hafley. He said he keeps a list in his wallet of all the things doubters have said to him over the years and uses it as motivation.

“To my mom, my brother, and sister, thank you,” Hafley said in front of a large and enthusiastic audience. “For your support and love, and never doubting me.”

As he finished speaking, an audience member’s Siri blurted out: “Sorry, I didn’t get that.” Hafley spontaneously joked that that raw emotion was a one-time thing, and the person whose phone it was wasn’t getting it again.

The catchphrase “Get in” has accompanied Hafley this week, and he made it clear he believes it’s an exciting time.

“I’m here, and I’m in,” Hafley said. “And I ask the BC community, get in.” What I asked this football team, get in. For all you guys, get in, because it is going to be real. It’s going to be special. And we’re going to do this together.”

There are still many moving parts as Hafley fine-tunes his coaching staff and starts to build for the future. Monday showed how genuinely overjoyed he is for the challenge, and he left BC fans excited about what’s to come.

He fits in perfectly with BC’s underdog mentality, and his goal is for them to collectively no longer become underdogs.

“I mean just look at me,” Hafley told reporters. “I’m not the biggest guy, I don’t look like I played big-time college football and that’s the truth. I’ve had to work really hard. I’ve had a chip on my shoulder. I’ve had to kick down doors. It’s been hard, but it’s been real and it’s been worth it.” 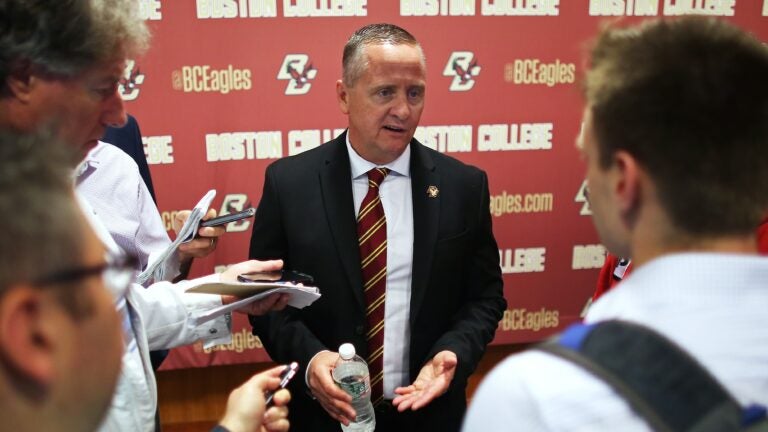