It felt like déjà vu for Boston College’s players, coaches, and fans.

Like a prank from the universe that presented itself for no reason whatsoever and didn’t show any remorse.

The joke leading up to Thursday’s Birmingham Bowl battle with No. 21 Cincinnati was that lightning might dictate this year’s game as well. Though the forecast looked bleak, it still seemed like a long shot that it would actually happen.

The difference, though, was that last year’s historical hiccup – which Boston College led by a touchdown with 5:08 left in the first quarter – never continued. This year’s edition did, and many Eagles fans were left wishing it hadn’t.

When play stopped with 7:55 left in the first quarter, the Eagles and Bearcats were scoreless and it was anyone’s game. Once the action resumed, it was all Cincinnati. The Bearcats (11-3) cruised to a decisive, 38-6 win, as the Eagles (6-7) ended the season with a losing record for the first time since 2015.

“We just didn’t come out and play well,” interim head coach Rich Gunnell told reporters. “We got our butts kicked.”

Here’s a look at how the game unfolded, as the Eagles stumbled to the finish line in an up-and-down year filled with both inconsistency and promise.

They never recovered after the delay.

Gunnell acknowledged the peculiar nature of the lightning hullabaloo.

“In our guys’ minds, the coaches’ minds, we’re like, ‘Here we go again,'” Gunnell said. “It’s literally lightning strikes twice in the same place. It’s weird how it all worked out.”

A Cincinnati-based reporter noted that the Eagles wanted to call the game after the delay, but a Boston College spokesman who was inside the room when the discussion transpired refuted that notion both publicly and to Boston.com.

Play was relatively even, and sloppy, before the delay, but afterward, the Bearcats seized control and started asserting themselves in a dominant way.

The Eagles never recovered, and the result was a game that was as one-sided as the score indicates.

Good thing our graphic design team was prepared for this after last year!#WeAreBC? pic.twitter.com/IFM1AF7zc9

They had no answer for Cincinnati’s familiar-looking offense.

The Eagles knew coming in that slowing down Cincinnati quarterback Desmond Ridder wouldn’t be easy, but they likely didn’t expect it to be this difficult.

Ridder finished with three touchdowns on the ground and one in the air, consistently breaking tackles and turning seemingly modest gains into sizable ones.

The Eagles were without linebacker and All-Atlantic Coast Conference second-teamer Max Richardson (hamstring), who was their most consistent and most dynamic defensive player this season. True freshman and Lincoln-Sudbury product, Mike Ciaffoni provided his first career sack, and Isaiah McDuffie continued his strong play with 10 tackles, but it wasn’t nearly enough.

Cincinnati came in as the most penalized team in the nation, yet it only committed two for five yards. The Bearcats won the turnover battle, 1-0, and they beat BC at its own game.

It wasn’t anything flashy. It was a tough, consistent, reliable brand of football that the Eagles have played the bulk of this season but were sorely missing Thursday.

They finished 0 for 11 on third down and struggled to pick up first downs.

BC’s defense wasn’t the only reason the result ended up the way it did.

Though the defense didn’t give the offense much of a chance, the offense also couldn’t generate much momentum when it was on the field.

Quarterback Dennis Grosel was a modest 8 of 17 with 87 yards, no touchdowns, no interceptions, and one costly fumble that led to a touchdown that made it 17-0 midway through the second quarter. Tight end Hunter Long capped a strong season with two catches for 45 yards, including a 40-yard gain in the first quarter.

The Eagles, however, finished a whopping 0 for 11 on third down and 0 for 1 on fourth. David Bailey chipped in eight carries for 28 yards, and Patrick Garwo ripped off a 30-yard run, but the Eagles were sorely missing their all-time leading rusher, AJ Dillon.

Dillon opted to declare for the NFL Draft and sit this game out. While BC likely wouldn’t have won with him, it might have been a closer game. Bailey has shown plenty of promise, and he should thrive in an increased role next season, but Thursday wasn’t the breakout game on a national stage he was hoping for.

Many expected BC’s biggest edge would be its offensive line, but Cincinnati’s defensive line was up for the challenge. The Bearcats were physical, explosive, and relentless, and they built a 17-0 halftime lead and never looked back from there.

The Eagles turned in an electrifying play on special teams.

The most scintillating play of the day for BC – and perhaps for either side – came with 4:56 left in the third quarter when Mike Palmer blocked a field goal and Brandon Sebastian returned it 67 yards for a touchdown.

BC was down 24-0 at that point, so it would have taken a herculean, Patriots-Falcons-like comeback, but it was a silver lining on an otherwise bleak evening in Alabama.

The defensive back Palmer squeezed his way through two Cincinnati players and batted the ball. It took a friendly bounce and floated right into fellow defensive back Sebastian’s hands, and he corralled it and sprinted the other way for his first career touchdown.

BC couldn’t tack on the 2-point conversion, though it still managed to get on the board. There are no moral victories for an ACC program with perennial high expectations, but it was certainly a better alternative than getting shut out.

On a day where there wasn’t much offense to speak of, and they also botched a field-goal attempt, this was a much-needed highlight.

This was the last game before Jeff Hafley takes over.

Cincinnati is 11-3 for a reason. The Bearcats have been considered one of the more complete teams in the country all season, and they looked the part Thursday.

Gunnell embraced the opportunity and was the right man for the job, but it was a tough situation for him to enter. The odds were against the Eagles coming in, and many factors were in Cincinnati’s favor, however that didn’t make the outcome it any easier for them to digest.

“It’s tough to go out like this,” senior Ben Glines told reporters. “It stings. It’ll sting until the next time I step on the football field.”

It’s not that they couldn’t win, but frankly, they weren’t expected to. Next year, as new head coach Jeff Hafley takes over, the goal is that the overall expectations are higher.

They want to ensure finishing close to .500 is no longer the norm, and winning one bowl game in eight tries – as they currently have since 2008 – is never a possibility. This loss shouldn’t overshadow what was a solid, promising season with many impressive wins, but it shouldn’t be considered enough in the grand scheme.

The Eagles want better, and they hope Hafley is the man to lead them there. 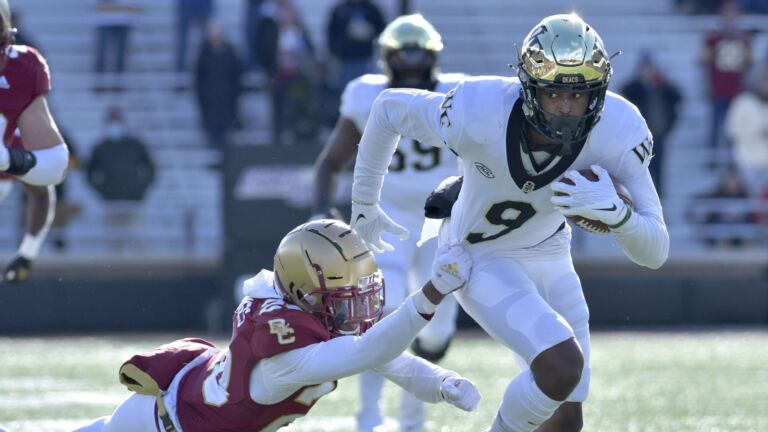