The Celtics face the Rockets in Houston today at 9:30 p.m. Boston is currently riding a seven-game winning streak.

The Bruins will be back in action tomorrow against the Canadiens at TD Garden (7:30 p.m.)

On Monday night, Northeastern men’s hockey won its third consecutive Beanpot, defeating Boston University 5-4 in double overtime. The game — which was watched by a record crowd for the competition — included several incredible plays and moments, such as a Terriers tying goal virtually as time expired in the third period.

But in double-overtime, it was the Huskies who prevailed, scoring a power-play goal to win it.

The controversial penalty in double overtime of the Beanpot: Amid an incredible Beanpot championship game, one unfortunate moment stuck out in the postgame scene.

A penalty, called in the second overtime period of Northeastern and Boston University’s epic clash, immediately became a point of controversy when the game-winning goal was scored during the ensuing power play.

Here’s the call against Patrick Harper for taking down Ryan Shea. #BUvsNU #Beanpot (via @NESN) pic.twitter.com/FjCf5HdPco

In the aftermath, Boston University coach Albie O’Connell was not happy.

“What did you think? What did you think about it?” said O’Connell when asked about the penalty by reporters. “I’m not supposed to comment on officials. The one thing I will say, the diving in that game that was called? Unreal. Unreal.”

“Karma didn’t catch up to that one,” O’Connell added. “It will. It’s just a tough thing to watch.”

The discussion of the call spread. Even college hockey neutrals weighed in, disagreeing with the call.

Northeastern coach Jim Madigan, citing some Beanpot history, had a different view of the call.

“I’m not going to dignify the question or his comments with an answer,” Madigan said when asked about O’Connell’s stance. “As I said, I thought that was a real good game. Both teams competed hard. They played hard. The game could have gone either way. We got the break. I sympathize and empathize with him. Because we’ve lost to BU on what we didn’t think was a good call in 2015. These things have a way of evening themselves out. Our guy was going down the wing and got tripped. So the referee called it.”

Trivia: Trae Young recently achieved the rare feat of scoring 48 or more points in a game in which he also recorded at least 13 assists. Young, James Harden, and one other player are the only ones to accomplish that multiple times in NBA history. Who is the third player?

Hint: A Hall of Famer, he helped the Celtics win the 1981 NBA Finals.

Trevor Bauer is not a fan of the proposed changes to Major League Baseball’s playoff format:

No idea who made this new playoff format proposal, but Rob is responsible for releasing it, so I’ll direct this to you, Rob Manfred. Your proposal is absurd for too many reasons to type on twitter and proves you have absolutely no clue about baseball. You’re a joke.

Former Patriots assistant coach Pepper Johnson was fired after one game: Johnson, who started the XFL season as the defensive coordinator of the Los Angeles Wildcats, was let go by the team after their franchise-opening 37-17 loss to the Houston Roughnecks.

On this day: In 1990, Buster Douglas pulled off one of the biggest upsets in boxing history, knocking out Mike Tyson in the 10th round to win the heavyweight championship. Slated as a 42-1 underdog, Douglas shocked the world by first recovering from an eighth round knockdown, and then landing a series of punches in the 10th that sent Tyson to the ground for the first time in his hitherto undefeated career.

A dazed Tyson couldn’t get back on his feet in time, and Douglas was the new champion:

Daily highlight: Boston University forward Robert Mastrosimone prevented what would’ve been a decisive Northeastern goal in the third period of the Beanpot final on Monday night with a fantastically alert swat of his stick. 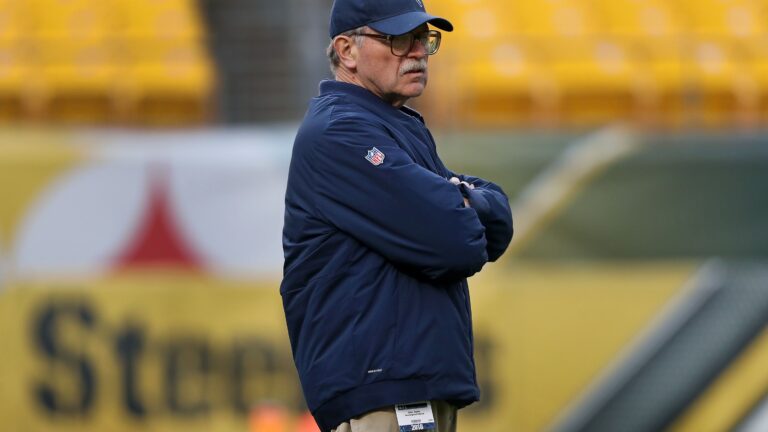