A pair of rising sophomores on the University of Massachusetts Boston hockey team, Jake Adkins and Andy Walker, are hanging up their skates — temporarily — for a good cause.

Roommates last year as freshmen, Adkins and Walker are in the midst of what they believe will be a 10-day trip from Boston to Walker’s hometown of Mason, Michigan – on rollerblades.

Dubbed the “Men In Blades,” their roughly 900-mile journey is a fundraiser for the American Cancer Society, a meaningful cause for both. Adkins’s mother, Ali, is a two-time Hodgkins’ lymphoma survivor, and Walker lost his grandfather to cancer.

As of Thursday morning, their GoFundMe page had raised more than $14,000.

“We figured that the best way that we’d be able to get a following and get people on board with this is to do this for something that’s much bigger than us,” Adkins said Wednesday evening in a phone interview west of Poughkeepsie, N.Y. “Of course, we’ve always wanted to give back, and especially during these times, there’s really not much else to do, so we figured we’d try to do something amazing.”

Back in March, as UMass Boston closed its campus and the teammates found themselves under a stay-at-home order, Adkins and Walker bought rollerblades as a way to keep up their hockey conditioning, and simply entertain themselves. At the beginning, they rode just one mile every day.

“When we first got them, I was like a kid on Christmas,” Walker said. “Every day, I was just excited to be on the wheels. We got up to a point where we were going pretty far and not getting tired, so I asked Jake, ‘How much money would it take to go to L.A.?”

A cross-country ride turned out to be unrealistic, so Walker and Adkins reset their expectations and decided to map out the journey to Michigan. Waking up at 4:30 a.m., they ride roughly 100 miles every day, split up into 25-mile increments with a nap at the halfway point. The entire time, they’re trailed by Adkins’ father and a support staff of friends – including a massage therapist – in an RV.

Day 1 brought the skaters from Boston to Springfield, and they crossed into New York on Day 2. After chatting with the Globe on Day 3, they completed their journey from Poughkeepsie to Honesdale, Pa., just north of Scranton, with 592 miles remaining.

The @MenBlades are over 1/3 of the way there. They made it from Poughkeepsie, NY to Honesdale, PA (north of Scranton) today and had a chance to talk to the @BostonGlobe today @NHLdotcom @NHLPA @NESN @UMass @UMassBoston #beaconstrong @NCAADIII pic.twitter.com/nfmRuUibAQ

While four-hour roller blade sessions don’t necessarily translate back to 30-second shifts on the ice, Walker and Adkins noticed that the same mentality that drives them on the ice is pushing them on their ride across the country.

“We’re determined,” Walker said. “It’s just tough. You’ve got to just put your head down and eventually you’ll get there.” 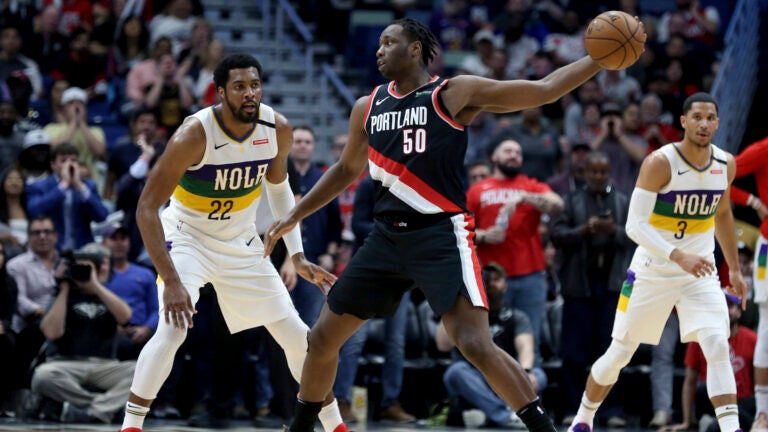