BOSTON (AP) — Jay Heath scored 19 points and Boston College sank seven of eight free throws in the final 45 seconds to beat Notre Dame 94-90 on Saturday and give interim coach Scott Spinelli a victory in his first game as a college head coach.

DeMarr Langford had 17 points and six rebounds, making a pair of free throws with 12 seconds left after the Fighting Irish cut a 12-point second-half deficit to two, 90-88. He sank two more foul shots with 6 seconds left to ice it.

“A great win, but even more that that was how enjoyable that was for the seniors,” said Spinelli, who had spent most of the past 25 years as an assistant before taking over when Jim Christian was fired.

“They deserved an opportunity to have a fun locker room,” said Spinelli, who started two senior walk-ons in the Eagles’ final home game. “It really is gratifying to watch their locker room celebration and how they responded after the win.”

Makai Ashton-Langford had 18 points and six assists, and Frederick Scott scored 18 points in his first game since injuring his knee in November. Steffon Mitchell added eight rebounds for the Eagles (4-13, 2-9 Atlantic Coast Conference), who won for the first time since Jan. 12 and in its first game since Christian was fired on Feb. 15.

“Shout out to Jim Christian. He set all of this up for us,” Ashton-Langford said. “They bring two different types of energy to the game. (Spinelli) is more of a jumpy guy, and that’s what it took for us to win.”

Prentiss Hubb scored 23 of his 28 points in the second half — including three layups in the final minute — adding seven assists and five rebounds for Notre Dame (9-13, 6-10). Trey Wertz scored 17 and Nate Laszewski added nine rebounds for the Irish.

“I just think this was the ultimate trap game,” Notre Dame coach Mike Brey said. “Let’s be honest: We got trapped in the bear trap. … They had a new coach and great spirit.”

BC led 74-62 with seven minutes left before the Irish scored on two Hubb layups and one by Dane Goodwin to make it a six-point game. They cut it to five points with two minutes left and to four, 86-82, with 48 seconds remaining after BC missed three straight free throws to start the final minute.

But the Eagles converted seven of their next eight to hold on.

Jackowitz grabbed a rebound but missed the only shot he took; Holtze made a 3-pointer to open the game, setting off a large celebration on the BC bench. The two scout team players — known as “Martians” for the green jerseys they wear in practice — were greeted with hugs and high fives after leaving the game two minutes in.

“They do an unbelievable job preparing our players,” Spinelli said. “It’s a thankless job, but they contributed a lot to helping out team get better.”

BC did not turn the ball over in the first half and did not commit its first turnover until Heath had ball the stripped with 16 minutes left in second. They finished with five turnovers in the game.

“They told us we had zero at half,” Ashton-Langford said. “We were trying to keep it at zero.”

Boston College: Finishes the regular season at Florida State and Miami, on Wednesday and Friday. 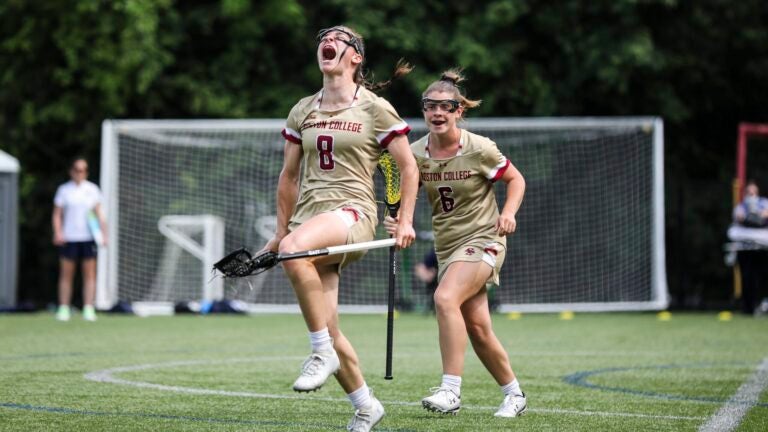