St. Cloud State completed its weekend sweep of Boston teams, defeating Boston College, 4-1, in the regional final at the Times Union Center in Albany on Sunday. The Huskies clinched their second trip to the Frozen Four, and first since 2013, one day after a 6-2 victory over Boston University in the opening round.

Matt Boldy gave the Eagles the early lead when he was able to beat St. Cloud goalie David Hrenak five hole with 5:37 left in the first period. Mike Hardman helped set it up by winning a battle for the puck along the boards and prying it loose for Alex Newhook to backhand it to Boldy, who broke toward the net and knocked it in.

After losing leading scorer Easton Brodzinski to what looked to be a serious knee injury in the opening minute of the second period, the Huskies received some offense from a pair of unlikely sources.

Senior Luke Jaycox scored his first goal of the year with 10:39 remaining in the period, beating BC forward Nikita Nesterenko to the loose puck on a rebound and knocking it into the open net. Zach Okabe helped set up the score by circling around from the back of the net and firing a shot from the left that BC goalie Spencer Knight was able to save, but the rebound kicked off to the right, and Knight was unable to scramble back in time to stop Jaycox’s bid.

The Huskies kept the pressure on BC, and took the lead with 4:45 left in the second period when senior Will Hammer was able to locate the puck in the middle of a scrum in front of the net and send it past Knight. It was Hammer’s second goal of the season.

St. Cloud would strike again in the final minute of the second period, as Nolan Walker gave the Huskies a 3-1 lead, drove toward the net and got the edge on defenseman Marshall Warren to slide the puck past Knight.

The goal was initially waived off, and Walker was assessed a penalty for goalie interference. But the play was reviewed, and it was determined that the puck crossed the goal line before Walker made contact with Knight, allowing the Huskies to take a 3-1 lead heading into the final 20 minutes.

The Huskies seemed to rally around the departure of Brodzinski, who was hit by Trevor Kuntar as he carried the puck across the middle of the ice in the BC zone. He appeared to twist his knee and fell to the ice immediately. The game was paused for several minutes while Brodzinski was examined before he was eventually helped off the ice.

Boston College had won in its last seven trips to a regional final, having last lost to North Dakota in 2005, and was looking for its first Frozen Four appearance since 2016. 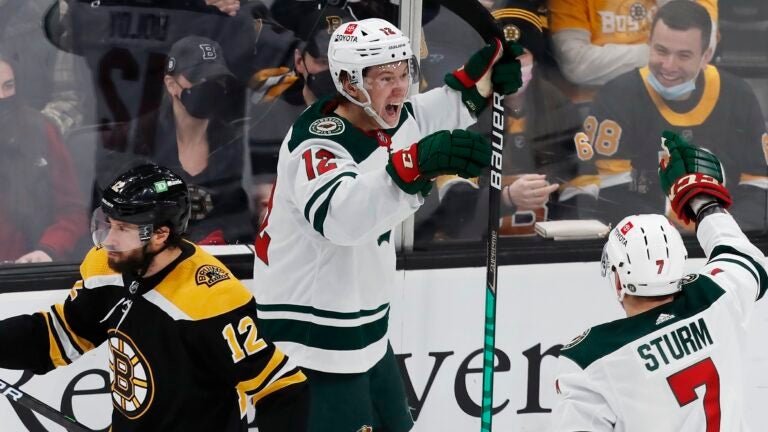