Garrett Wait didn’t look or sound like someone who had just scored the game-winning goal to send the UMass men’s hockey team to the national championship when he met with the media via video conference shortly after midnight Friday morning.

“It was pretty cool,” a subdued Wait said when asked about his goal. “Something that everyone dreams about. Now we have another game to focus on so you can’t get too high.”

The Minutemen will meet St. Cloud State in Saturday night’s championship game after the junior from Edina, Minn., scored with 5:30 remaining in overtime, lifting UMass to a 3-2 win over two-time defending champion Minnesota Duluth Thursday night at PPG Paints Arena in Pittsburgh.

Junior Bobby Trivigno set up the score, skating around the back of the net and firing a pass across the crease, where Wait was able to knock the puck past Duluth goalie Zach Stejskal.

The play capped an extra session that had been dominated by UMass, which continued to roll out four lines. Duluth on the other hand had shortened the bench, skating just three lines and looked fatigued in the extra session in which the Minutemen held a 13-2 edge in shots before finally breaking through for the win. It was the first time the Bulldogs lost an overtime game in the NCAA tournament since 1984, as they had won nine in a row in that span.

It was sweet revenge for the Minutemen, who lost to Duluth in the 2019 national championship game, 3-0 in a game where they failed to generate any offense.

For the first two periods, Thursday night’s game was playing out much the same way, with UMass landing just 11 shots on net. Yet the Minutemen only trailed 2-1 heading into the third period.

“It’s tough to play against Duluth,” said coach Greg Carvel. “I just felt that the guys, they weren’t used to that kind of struggle. After the second period I challenged them. I said, ‘You guys have a lot more to give.’”

The Minutemen responded and were more aggressive in the third period. Junior Anthony Del Gaizo gave UMass life, knocking in a rebound with 11:35 remaining in regulation to even the score at 2-2.

That’s how the score would remain through 60 minutes, although the final 79 seconds of regulation featured some drama. After just one penalty was called in the first 58 minutes, each team was whistled for a cross check 33 seconds apart in the final two minutes of regulation.

Duluth went on a power play with 1:19 left on Matthew Kessel’s penalty, and nearly took the lead 20 seconds later when Noah Cates deflected a shot that trickled under senior Matt Murray’s outstretched leg but rolled just wide of the net, with Kobe Roth unable to gather the puck.

The play carried into the corner, where Roth was called for a cross check with 46 seconds remaining, ending Duluth’s power play. The Bulldogs held a 36-15 edge in shots through regulation, but Murray, getting his first start in goal since Jan. 18, made 34 saves, as well as two more in overtime, to keep UMass’s hopes alive.

Murray was summoned to make the start after junior Filip Lindberg was among the four players who had to stay behind in Amherst due to COVID-19 contact tracing protocols and school policies. Leading goal-scorer Carson Gicewicz and goalie Henry Graham also did not make the trip.

After the game, the school announced that Gicewicz, Lindberg, and Graham were traveling to Pittsburgh on Friday and are in full compliance of COVID protocols. Should they continue to test negative, they will rejoin the team on Saturday. Senior Zac Steigmeyer, who served as an emergency backup Thursday night, will be able to resume his duties as the student equipment manager.

“I’m just happy to get the band back together,” said Murray when asked about his teammates’ return. “Steigs has been a great guy, filling up the extra goalie role. But us three have some really good chemistry. And obviously missing Carson is a big presence and everything.

“I think it’s going to be nothing but hard work and smiles when everyone comes back [Friday].”

Sophomore defenseman Zac Jones had a strong first period for the Minutemen, hustling back as Cates went in on a breakaway and stripping the puck. Minutes later, with UMass on a power play after Tanner Laderoute was called for hooking, Jones scored the first goal of the game, his wrister beating Stejskal to the top right shelf for a 1-0 lead with 4:27 remaining in the first period.

Duluth would get the equalizer when Quinn Olson, a third round draft pick of the Bruins in 2019, fired a shot that got past Murray, with Laderoute knocking it into the net with 2:10 left in the first period.

Duluth took a 2-1 lead with 9:01 remaining in the second period after Cole Koepke circled around the back of the net from left to right and put in his own rebound past Murray. But that would be the last puck to get by Murray, who turned back the remaining Duluth bids to set up the comeback.

“It was the goaltending I was concerned about, just that Matt hadn’t played in so long,” said Carvel. “He’s a good goalie and he made saves that he needed to tonight.

“And it’s quite a story to be able to overcome that situation of losing that many players. And everything tonight was a testament to the culture of this team. I’m very proud of them.” 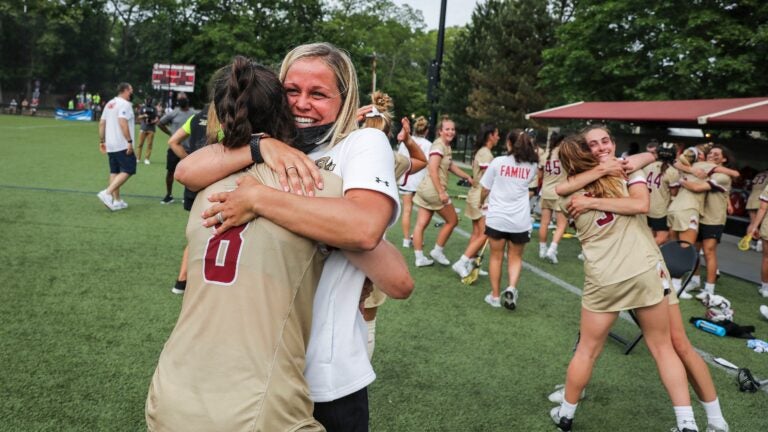