Coping with national championship game losses in three consecutive seasons has been as agonizing as it sounds for Boston College lacrosse coach Acacia Walker-Weinstein.

She’s scoured game film, leaned on other BC coaches, and trusted that the short-term struggle will make the ultimate triumph even sweeter for the Eagles, yet that hasn’t made the harsh reality any less heartbreaking.

“Call me a loser, but I think about it every day,” Walker-Weinstein told Boston.com. “The teams were so amazing. They were so incredible. Losing three years in a row, you never get over that. I would trade anything to give those girls a championship.”

Now, after a nearly two-year hiatus due to the COVID-19 pandemic, the Eagles (13-3) are back in the NCAA tournament as the 4-seed with a legitimate shot to capture the first national championship in program history. Boston College hosts Fairfield on Friday, May 14, at 1 p.m. in the first round, and a win would pit them against either UMass or Temple on Sunday.

The Eagles are making sure they don’t look past any opponent, and the Stags have their full attention currently, but they also have the larger goal in the back of their minds. After coming tantalizingly close in each of those seasons, they’re hopeful their time is now.

“The goal is to win a championship,” Walker-Weinstein said. “We won’t stop until we win it.”

Walker, who was an All-American at Maryland, competed on the United States Women’s Senior Lacrosse Team, and was an assistant coach at Northwestern and UMass before arriving at BC, became head coach of the Eagles in 2012.

BC advanced to the NCAA tournament quarterfinals in 2014, earned its highest winning percentage ever in 2015, and made it all the way to the championship game every year from 2017-2019. The Eagles lost by three goals to Maryland in 2017, beat Maryland then lost to James Madison by one goal in 2018, and knocked off North Carolina in double overtime before falling to Maryland by two goals in 2019.

Graduate student and attack Cara Urbank, who is the most seasoned player in all of Division 1 women’s lacrosse, was there for every one of the scintillating postseason runs and every one of the crushing championship game losses. She elected to come back for one final season to help the Eagles finish what they started.

“I knew we had unfinished business,” Urbank said. “I didn’t want to end my career without having a chance to do that. There’s definitely moments where I look back and it’s a learning experience, but we’ve moved on from it. We know we haven’t achieved what we want to achieve.”

Walker-Weinstein said the Eagles implemented changes after each championship game, dissected every decision they made as coaches, and tried to be better the next time. They’ve had a particularly long time to think about the most recent run.

“We’ve had two years to sit on 2019,” Walker-Weinstein said. “Still, to this day, it makes me sick to my stomach, but we’ve learned so much from it.”

She credited the Eagles for becoming even closer this year after their season was cut short in 2020. Walker-Weinstein said this group is perhaps the most coachable team she’s ever had, adding that the pandemic actually benefited the Eagles in a sense because it made them value and appreciate every day even more.

This young team has its own identity and is hoping to write its own story while leaning on those past runs as motivation. Jenn Medjid, Belle Smith, Caitlynn Mossman, and Courtney Weeks are a few other names to know for BC on a roster with elite depth. The Eagles have learned from losses to UNC and Syracuse this season and consider themselves stronger from them.

One major difference this season is the arrival of senior attack Charlotte North, a Duke transfer who joined the program last year. North, who is fourth in the nation with 71 goals and seventh in draw controls per game (8.81), is one of the most explosive players in the country. Urbank called her an “unbelievable freak athlete” and an even better teammate.

North remembers watching the national championship game in 2019, admiring Walker-Weinstein’s fire and competitive spirit on TV, and appreciating the way BC played. Now, after a longer wait than she ever could have imagined, she’s eager to help the Eagles reach new heights.

“This is a once-in-a-lifetime opportunity,” North said. “Once we hit playoff time, the energy kicks up a notch. It’s do-or-die. We play every day like it’s our last a little bit more this year.”

North said Walker-Weinstein always tells them that in order to be the best, you have to beat the best. Walker-Weinstein added that it’s easy for players to raise their hands when asked if they want to win it all, but this team truly has the burning desire to do so and has put in extra work to ensure this postseason ends differently.

It’s an unenviable position in some ways – where the only gratifying outcome is a championship and anything else is a disappointment – yet the Eagles wouldn’t have it any other way. They have no desire to shy away from the lofty expectations and no desire to let up until they’ve reached the pinnacle of college lacrosse.

“There’s nothing like the playoffs,” Walker-Weinstein said. “Nothing. To have the opportunity to go in as the 4-seed, and host, stare down our bracket, this is the good life.” 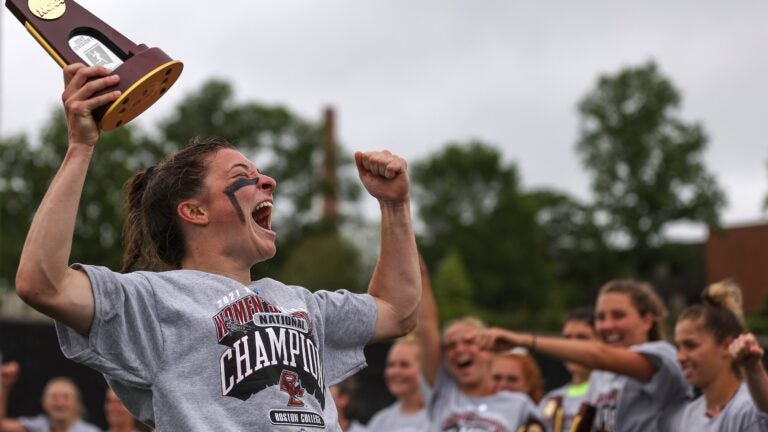