The fourth time was the charm for Boston College women’s lacrosse.

After suffering heartbreak in the last three national championship games, the Eagles finally won their first national title Sunday with a 16-10 win over Syracuse. Senior Charlotte North scored six times in the win, capturing the NCAA single-season record for goals in a season with 102. The Eagles (18-3) had seven different goal scorers and outscored the Orange 7-2 in the second half.

It was a back and forth first half, with five lead changes and 17 goals. North struck first for BC with a goal just 2:30 into the game. Syracuse (17-4) answered with a Sam Swart goal, before Eagles attack Cara Urbank scored off a free position shot to recapture the lead. BC jumped out to a 3-1 lead thanks to a North shot over the heads of the Orange defenders.

Syracuse kept the Eagles scoreless for the next 12:19. Sophomore midfielder Emma Tyrrell had her best game of the season against BC in the regular season, and was on the pace to equal that output Sunday. She nabbed possession after North’s second goal and was stopped by a kick save fromBC goalie Rachel Hall. A minute later, Tyrrell brought the Orange within one. Syracuse freshman Emma Ward scored four minutes later to knot the game, 3-3, before Sierra Cockerille sliced through three BC defenders to give Syracuse their first lead.

Jenn Medjid, the Eagles’ semifinal superstar, ended the scoring drought five minutes later to tie the game, 4-4. On the next possession, Tyrrell was sent off for her second yellow card, disqualifying her for the game. The Eagles capitalized on the player advantage, with Belle Smith scoring a leaping goal to recapture the lead.

With Tyrrell’s absence, Syracuse called upon their depth to stay toe-to-toe with the Eagles. Emily Ehle picked up a rebound off a Hall save to tie the game for the fourth time, then Swart’s second of the game gave the Orange a 6-5 lead. The lead went back BC’s way after an over-the-shoulder goal from Courtney Weeks and a snipe by Smith. After Syracuse’s Cara Quimby tied the game yet again, North found herself left alone behind the Orange net and scored on a wrap-around to give the Eagles a lead they wouldn’t relinquish.

A Caitlynn Mossman bounce shot gave the Eagles a two-goal lead with 90 seconds remaining, but Ward cut that margin to one with 23.2 seconds left to make the score 9-8 at the half.

In the first five minutes of the second half, BC took control. They jumped out to a 12-8 lead, their largest of the game, thanks to three quick goals by Medjid, Weeks, and North.

Freshman Maddy Baxter gave Syracuse life, scoring their first goal of the second half just over 12 minutes in. But a minute later, North answered, ripping a shot into the net to score her fifth goal of the game, her 101st goal of the season, setting a newDivision I record.

With 13 minutes left, Cassidy Weeks and Urbank added goals to give the Eagles a 15-9 lead. Syracuse’s scoring leader, Meaghan Tyrrell, scored her first of the game with 7:25 left. But when she and Cockerille fouled on the following possession, it gave BC a player advantage that would carry them through the rest of the contest. With 1:11 left, North scored her sixth goal of the game to put the game away.

Hall, who played some of her best lacrosse over the championship weekend, finished the game with nine saves. 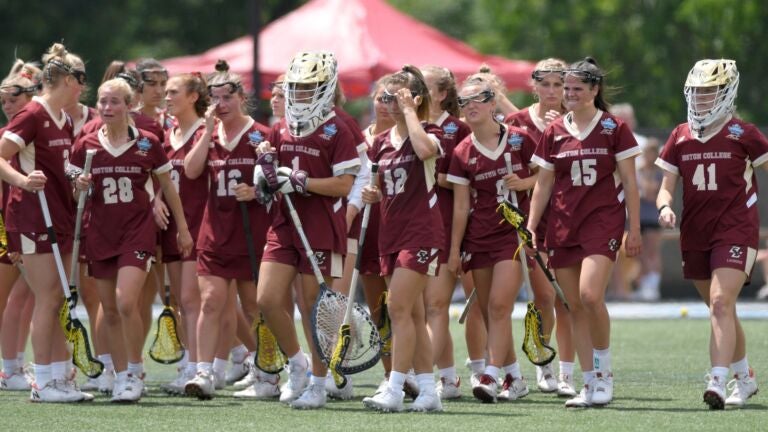