The Boston College football team welcomed 14-year-old Hingham native Jack Giorgio to the squad Thursday when he signed his letter of intent in front of a packed house.

Giorgio, who has been battling brain cancer, was introduced through Team Impact, a nonprofit that pairs kids with chronic or serious illness with college sports teams.

“Fired up to meet our new guy here,” head coach Jeff Hafley said. “It’s kind of like our ’21 class. I never got to see anyone in person. When I saw him, he’s way bigger than I thought.”

Hafley told Giorgio the team is proud of him and excited to have him on board.

“Perseverance, fighting through hard times, not giving up,” Hafley said, via NBCBoston.com. “Dedication, grit. Everything you talk to a team about. You can talk about it all day long, but he’s a living example of it, and I think that’s so important for our team to see and not just hear.”

During the ceremony, Giorgio held up the BC jersey, signed his name on the dotted line, and embraced his new teammates.

Offensive lineman Zion Johnson noted that he had spoken with Giorgio over Zoom before, and he believes meeting in person added another level to their steadily growing bond. He said Giorgio epitomizes a BC man and football player.

Former Boston College star Mark Herzlich, who in 2009 was diagnosed with Ewing’s sarcoma, a form of brain cancer, expressed his support via video.

“I am right there with you, fighting, supporting,” Herzlich said. 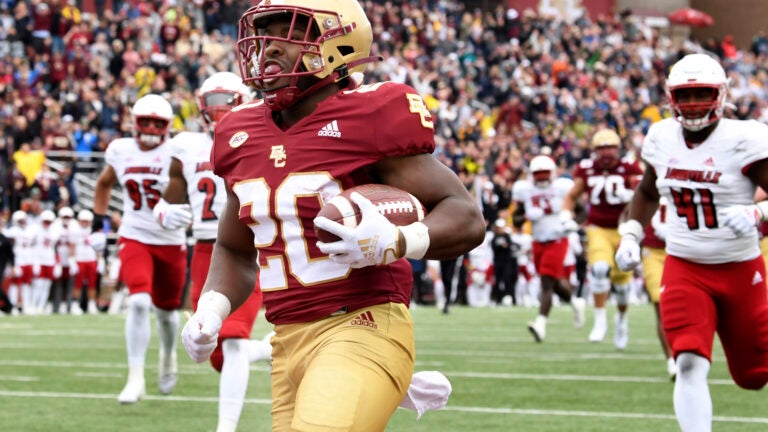