Boston College quarterback Phil Jurkovec could miss the rest of the season with a right wrist injury suffered Saturday against UMass, according to a release from the school.

Per BC, Jurkovec underwent surgery Monday at Newton-Wellesley Hospital. The school also announced placekicker Aaron Boumerhi will miss the rest of the season with a hip injury.

The school did not specify Jurkovec’s injury.

Jurkovec posted a photo of his injured right wrist to Instagram on Monday, two days after he fell awkwardly during BC’s first drive of the game and didn’t return to the field. Dennis Grosel replaced him and finished 11-of-14 passing for 199 yards and a touchdown in the Eagles’ 45-28 victory.

“I met with the doctors, they got him scanned, they got him X-rayed,” Hafley said on Sunday, according to the Boston Herald. “They are supposed to get back to me today and hopefully I’ll have an answer.

“All I know is that he kind of fell on it when he went down and it was in his hand and wrist.”

Jurkovec, a 6-foot-5 redshirt junior, had a stellar sophomore campaign. He threw for 2,558 yards in his first 10 starts — the most by any BC quarterback in school history, according to the team’s website. He passed for 255.8 yards per game as a sophomore — 26th in the country and second only in BC history to former NFL MVP Matt Ryan.

The Eagles are 2-0 so far this season after victories over UMass and Colgate to start the season. They take on Temple on Saturday. 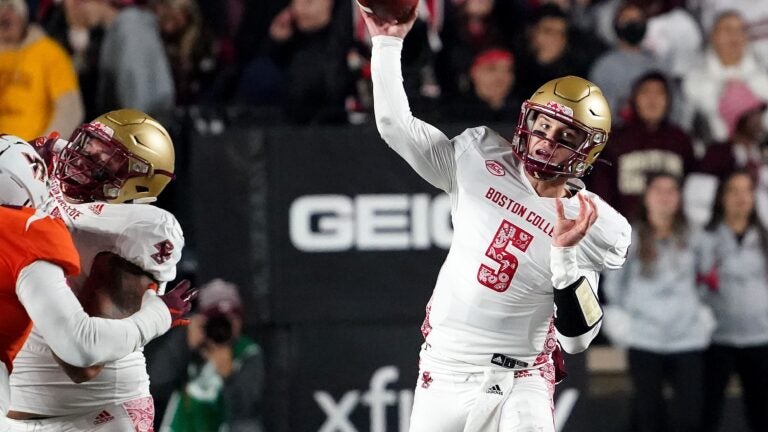