When Boston College lost starting quarterback Phil Jurkovec for potentially the rest of the season because of a hand injury last week against UMass, expectations from the outside took a hit and questions started to swirl about the Eagles’ ceiling.

To the Eagles, the lofty expectations they’ve set for themselves haven’t changed in the slightest. They still believe they have the necessary firepower to contend, and Saturday’s 28-3 triumph over Temple offered a glimpse into how this team could look going forward.

BC racked up 187 yards on the ground, pieced together a stellar defensive effort, and managed the game well. The passing game was uncharacteristically stagnant the bulk of the way, but the Eagles did more than enough to distance themselves from the Owls (1-2) at Lincoln Financial Field in Philadelphia.

“The way they bounced back after last week was really impressive,” coach Jeff Hafley said.

They built an early lead.

BC started hot, as quarterback Dennis Grosel found freshman Jaden Williams for a 19-yard touchdown. Williams has flaunted his potential early in his career and looks comfortable taking on a major role.

The Eagles overcame a Grosel interception and built a 21-0 halftime lead following a 1-yard Pat Garwo TD and a 2-yard Travis Levy score.

Offensive linemen Tyler Vrabel, Zion Johnson, Alec Lindstrom, Christian Mahogany, and Ben Petrula made life easy for Garwo, Grosel, and the rest of the Eagles, who averaged 5.3 yards per carry compared with 2.2 for the Owls.

The Eagles didn’t allow Temple to pick up a first down until 11:25 remained in the second quarter. Once the Owls did get one, former Temple and current BC linebacker Isaiah Graham-Mobley registered a timely stop on fourth down, flattening quarterback Justin Lynch and firing up the BC sideline.

In the third quarter, freshman Bryce Steele came up with a key stop on fourth down to squelch yet another promising Temple drive.

“If we keep playing like that,” Graham-Mobley said, “the sky’s the limit.”

Temple’s five first-half possessions featured four punts and a turnover on downs. The Owls gained a bit of momentum in the second half, and came away with a field goal in the fourth quarter, but the Eagles never let it escalate.

Temple’s 239 yards marked the second-lowest total for an opponent under Hafley, as the Eagles posted a season-high four sacks and limited the Owls to 3 of 14 on third down and 1 of 4 on fourth.

“That was the best I’ve seen them play in a really long time,” Grosel said of the defense.

It was a homecoming for Isaiah Graham-Mobley and Khris Banks.

Graham-Mobley acknowledged that his adrenaline was “super high” and said reminding himself to not get too emotional against his former team went a long way. He provided one of the biggest plays of the game and cobbled together a team-high eight tackles.

Fellow Temple transfer Khris Banks added five tackles and a game-high 1½ sacks, and he was giddy afterward while describing the emotion of playing in front of his family against his former teammates.

After a somewhat lethargic third quarter, the Eagles pieced together a strong fourth-quarter drive fueled by shifty running back Alec Sinkfield. Grosel capped it with a 2-yard rush with 4:14 remaining. The game was already essentially out of reach but that sealed it.

“The big guys up front were like, ‘All right, we’re going to run this one out and finish it with the ball in our hands,’ ” Grosel said. “I don’t want to say it’s an ego thing, but it was personal for us. We wanted to punch it in the end zone.”

They understand there’s room for improvement.

While it was a largely encouraging performance from the Eagles, and they finished strong, they know there’s work to be done.

Grosel was just 5 of 13 for 34 yards. The running game went cold in the third quarter, as the Owls possessed the ball for nearly 12 minutes. Though the Eagles executed defensively, they didn’t cause any turnovers.

The result was ideal, and there were plenty of positives, but the schedule only gets tougher from here. Next up is Missouri on Saturday at noon at Alumni Stadium, followed by a trip to Clemson the following weekend.

Said Hafley: “As long as we can keep improving, we’ll be happy.” 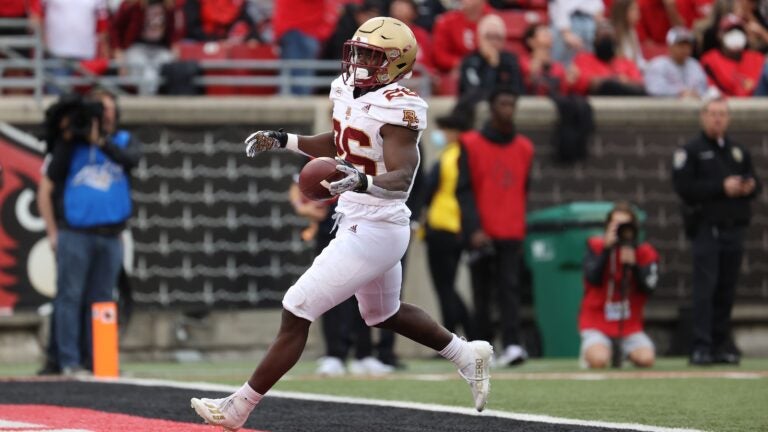