Coming into the season, with Phil Jurkovec established as one of the best quarterbacks in the Atlantic Coast Conference, Boston College football coach Jeff Hafley never envisioned having to closely examine who should start at that position at any point.

When Jurkovec went down with a right hand injury in Week 2, seasoned backup Dennis Grosel was the obvious choice to replace him. Grosel played admirably in a familiar role, helping BC get to 4-0 for the first time since 2007 and average 41.3 points per game in the process.

Since ACC play began, however, that number has plummeted to 11.3, as BC has sputtered to an 0-3 record in the games that matter most. Of course, part of the dropoff can be attributed to the improved competition, but it’s no secret that BC has struggled offensively.

Hafley has stayed mum about who will start at quarterback against Syracuse (4-4, 1-3 ACC) Saturday at the Carrier Dome, but he did acknowledge that he took a hard look at the position. He wouldn’t divulge whether he decided on Grosel, Daelen Menard, Matthew Rueve, or Emmett Morehead, but he said he feels confident with the choice.

“I thought it would be a lot harder than it actually was, to be honest with you,” Hafley said.

Grosel has had plenty of success throughout his career and has proven fully capable of playing at a high level. But in ACC play this season, he is 61 of 111 (54.9 percent) for 646 yards, with two touchdowns and five interceptions.

Last Saturday, in a disheartening 28-14 road loss to Louisville, the Eagles started and finished strong offensively but went cold in the middle of the game. The defense caused four turnovers, yet the offense produced only 7 points off those takeaways. Louisville blitzed early and often, Grosel and his receivers had trouble connecting on deep balls, and three-and-outs were far too prevalent.

It’s quite possible that Hafley will stick with Grosel and the offense will mesh the way it did early in the year. If he does switch QBs, however, it would mean turning to a young and unproven option.

Time will tell who gets the nod, but regardless, it’s clear there are several other factors at play outside of the quarterback position. The Eagles have acknowledged that they need to make their offensive approach less predictable and capitalize when opportunity arises.

Running back Alec Sinkfield, who scored his first BC touchdown against the Cardinals, said the Eagles have a great understanding of who they are.

“It’s not necessarily that we can’t score,” Sinkfield said. “It’s little things here, little things there. There’s not anything we have to drastically change or to completely find a new identity. We have our identity. We just have to perfect it.”

Tight end Joey Luchetti echoed those thoughts and said it all comes down to execution. He believes the Eagles have plenty of playmaking ability and simply need to eliminate mental errors and return to the basics.

“I think we need to all take a step back, look, and start from square one,” Luchetti said. “Everyone’s getting a little jumpy right now, because obviously we haven’t been scoring the ball like we wanted to.

“I think we all know that we’re almost there, and we all know it’s not a talent issue. We all have confidence. Just a couple things have to click and then we’ll be good.”

Keeping the offense on the field will be particularly important against a Syracuse team with one of the most dynamic running backs in the country in Sean Tucker and a mobile and physical quarterback in Garrett Shrader. The Orange boasts the ACC’s top rushing attack with 242 yards per game, and a BC defense that allowed 331 to Louisville a week ago will certainly be in for a challenge.

Hafley has plenty of respect for Tucker and Shrader, yet he said he’s not concerned about the Eagles’ run defense. He trusts his players to respond this week.

Hafley said it’s fine if his players are frustrated, because he is himself, but he doesn’t think it’s prudent for anyone to panic.

“Those who stick around, and those who get through this tough time with us, those are the real people,” Hafley said. “They will be rewarded.” 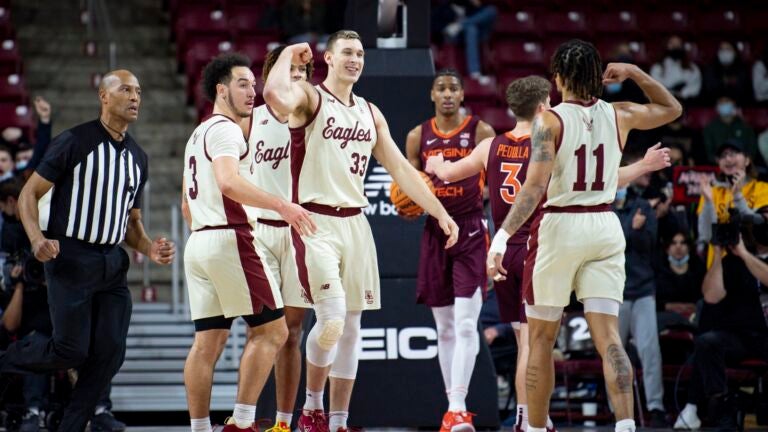